It's an overcast day in Parliament. At around 11.30 am, I learnt that Zahid Hamidi has written a letter to all Muslim MPs inviting them to a special briefing on the hudud 355 bill at 5 pm.


This is the strongest indicator that the infamous hudud bill will more likely than not, see the light of day either tomorrow or Thursday.

This UMNO - PAS romance has been building for years since the passing of the well respected Tok Guru Nik Aziz.

Under Hadi Awang, we saw Amanah breaking away to form a new party. Under Hadi Awang, we have seen a real closeness between PAS and UMNO. Lately in Parliament, we have seen how PAS indirectly supported the UMNO Budget by abstaining from voting. Then last weekend, PAS did not take part in Bersih 5. Now we wait and see if UMNO is about to return the favour to PAS by supporting hudud in the next two days.

I am in the PKR conference room. I just bumped into Joseph Kurup in the lift heading up. He was there to meet several MCA leaders. This may be a last attempt by some BN members to stop the 5pm meeting. The urgency suggests that BN component parties may not have been consulted about this.

The future of Malaysia may be decided in the next two days. On this gloomy late afternoon, those in power will meet to chart the course for such a decision. 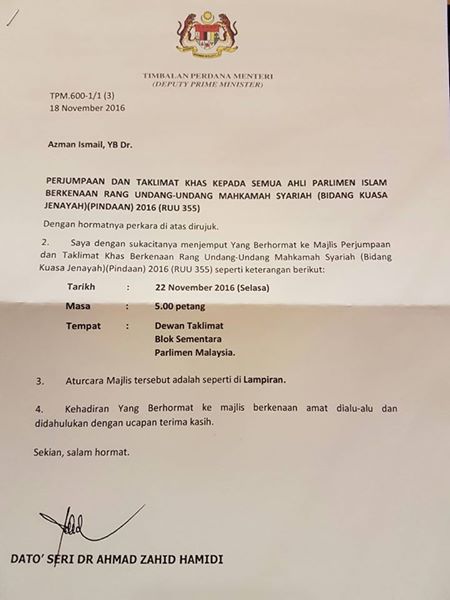