You can click on these pictures for a blow up. I received this from a reader who wishes to remain anonymous. Thank you Sir for sending me these pictures. They reflect the dichotomy that still exists in the country - most unfortunately. It also exposes the hypocrisy of the racists disguised as liberals who are crying out for fairness and justice.

First the pictures and the email that I received. They are self explanatory. 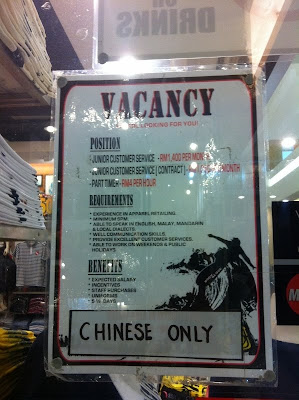 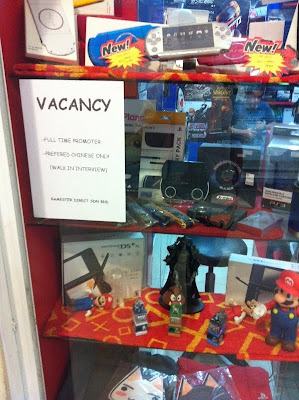 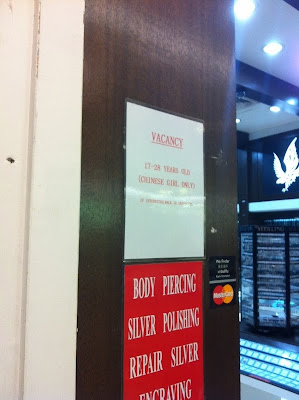 "Hi Mr Syed,
I want to share with you some photos i snapped in One Utama last week (23 Sept 2011). I'm not looking for jobs, but just doing 'window' shopping the other day. Well, the windows are plastered with job opening which is no doubt, an open discrimination to the rest of malaysian people. I only took 3 pictures, but i assure you there are about 3-4 shops that post this type of ads. I guess the shop owner thought every other race other than Chinese are crooks and not to be trusted. I don't know, there must be some other reason to it.

But there goes the spirit of One Malaysia down the drain."

When we met with the MCA President Dato Seri Dr Chua Soi Lek last week, he criticised Ibrahim Ali and Perkasa for still thinking like as though we are living in post Independence Malaya in 1957. Well, looking at these pictures that were snapped in One Utama, it would appear that we were living in the Straits Settlements of the 19th Century!! "Chinese Only" ?

I think this atitude should have disappeared, latest with the end of the Malayan Emergency in 1960. Unfortunately it has not.

There are some hypocrites who are making a big issue of "bangsa Malaysia-lah", 'saya anak Malaysia -lah' and other sloganeering kononnya because they want to erase racial discrimination and racial identification in the country.

I can agree with erasing racial identification. It is a good thing to do. We have to work towards erasing all racial identification. But that will only happen when the economic disparity between races is significantly reduced. And that will only happen when the Malays and the pribumis (the largest racial grouping) can stand on their own feet and can compete with anyone and anyting.

But we all have to chip in to expedite this process. A Chinese friend dropped by recently and said there should be a program where Chinese families can adopt Malay children (for a time) and teach them how Chinese people think and talk and also teach them Chinese business acumen. An 'inter racial' technology transfer. Malays may feel offended at this suggestion, but this is a very "out side the box" idea. There are Chinese who want to do the right thing - to help the Malays learn to compete. That is much easier and much cheaper and a lot more profitable in the long run. Putting up job vacancies that say "Chinese Only" is not helping our country at all.

You cannot just say "Bangsa Malaysia", 'Lets remove the "Race" requirement on all Government forms' and then turn a blind eye when the shops in One Utama blatantly advertise 'Chinese Only'. The hypocrisy is too blatant lah. And you want to tell Ibrahim Ali that he is wrong in this matter?

What is the Pakatan led Selangor State Government doing about such blatantly racist signage in One Utama (?) I believe One Utama is in Selangor. Or the Federal Government for that matter? Tidur ke?

I hope you can all see the hypocrisy and the racism in this country. I have mentioned before that when the mad Taliban blew up the Buddha statues in Afghanistan, Lim Kit Siang and the DAP made 13 Press Statements condemning the act. But when the Hindu fanatics destroyed the Babri Mosque in India the DAP and Lim Kit Siang remained quiet as door mice. Just like the DAP is usually silent on the Palestinian issue as well. (Its a Malay issue mah - Muslim people- nothing to do with Chinese).

The Bersih monkeys called for free and fair elections. They conveniently overlooked blatant cheating and irregularity in the PKR party elections - which resulted in Zaid Ibrahim leaving the party and forming KITA. Now KITA too is going through a 'lets throw out the dictators' phase.

The purpose of their street mobbing was to ensure there would be free and fair elections so that the people in this country will enjoy the benefit of democratic laws and freedoms. But now the more insane among them want to impose strange Biblical laws that will stone people to death, kill people for apostasy, crucify highway robbers and other such mental asylum madness. And the Bersih monkeys are keeping quiet.

I mean the sequence is this : clean elections begat clean democracy which begat fair and just laws. The sequence now has changed : clean elections, clean democracy, stone adulterers to death, and crucify highway robbers. It totally defeats the entire purpose of the earlier running mad in the streets. The desired end game is being sacrificed. Yet you remain silent? Hypocrites.

The country has too many hypocrites. We cannot achieve much social progress if people are stuck in their hypocrisies. Neighbours will continue to be suspicious of each other, people will not learn to cooperate, politics will be seen as a battering ram to hammer each other.

I hope those shops take down those signs saying 'Chinese Only'. It is not a nice thing to say. On the one hand you want the Government to remove the "Bangsa" on all application forms. On the other hand you put up these things. Haiyya - so obvious one mah.
Posted by Syed Akbar Ali at 1:35:00 PM

shuk don't give up,
between those racist Chinese and racist Malays is us!
Posted by STEADYAKU47 at Tuesday, September 27, 2011

Email ThisBlogThis!Share to TwitterShare to FacebookShare to Pinterest
Labels: Chinese Only