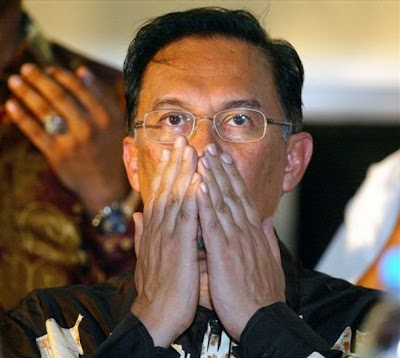 And so Anwar is acquitted of Sodomy! Is he free now? Free from what? Free until an appeal from Saiful is heard by the court? Free from any further prosecution for sodomy again? Surely not? What has happened is that the Judge has for  the moment, given him the benefit of the doubt because the evidence provided by the prosecution is not infallible. We have had appeals before where verdicts are overturned. So do not think that Anwar is now free. He is free for now. And ‘now’ is a very subjective time frame.

I go back to what I have said before. It is a reflection of how bankrupt our country is of good people if the only choice for UMNO and PKR is Najib and Anwar! Najib has made a fool of himself too many time for me to be able to hasten his ends by any other comments I can possibly make. So, for now, I will leave him alone. But not Anwar!

This acquittal has given him a bit more time to make good of PKR. I have no  doubt that even Anwar now knows that he is living on borrowed time. Nothing like death and going to prison will make you focus your thoughts on what is most important to oneself. And Anwar was going to prison until Monday. And he must have had time to focus his mind on the immediate future for himself and PKR. And nothing is more important then for PKR to lead Pakatan Rakyat in winning the 13th general election.

Put yourself in Anwar’s situation and you will begin to understand that his belief in himself must have been sorely tested when he put himself in that position of being taken by Saiful into sodomy two! The unfortunate thing about all that he has gone through is simply this: Pain, however severe, will be forgotten the moment it goes away. Once the pain is gone you mind thankfully erases all the physical suffering you have endured while in pain. And so like pain, what Anwar had endured this last two years might easily be forgotten now that he has been acquitted of that charge. I hope not!

I hope Anwar understands that he is on his last leg of being given another chance at leading Pakatan Rakyat into the 13th general election. It would even be correct if we are to say that he is being given another chance at life itself! And in this he has been given many  - only this time the chance is really not for him personally – but the chance is for PKR. For Anwar to put PKR in order and to get PKR ship shape so that it could stand shoulder to shoulder with DAP and Party PAS.

PKR should never again be a one man party – never again an Anwar party. PKR must move on and be the time that it is now in. And the time that we now live in wants a PKR that reflects the aspirations of the Rakyat. Accountability, responsibility and decency in conducting itself. Its leaders must be beyond reproach and stray as far away as it can from the UMNO that so many of them were once part off.

And nobody within PKR is as far away from UMNO as Nurrul is. So Nurrul is not ready! Then Anwar you have to make  her ready! If Thailand and Indonesia could have their Yingluck Shinawatra and Megawati Sukanmoputri why not Malaysia have its own Nurrul?

Najib beame Menteri Besar at the age of 28! And he ran wild sowing his wild oats here and there! I do not see Nurrul doing that!

Yingluck became Prime Minister of Thailand and immediately set about confiming her ability to govern without the ‘guiding’ hand of her brother Thaksin – I can see Nurrul doing that!

So please Brother Anwar you must not let us down this time. I understand that you have with you many diehards supporters that are convinced that you can do no wrong. But even in your hour of need last Monday only about 5000 of them turned up when 100,000 were required by Azmin - your able Deputy?

I will grant you this. By default you are the most cohesive bind to hold Pakatan Rakyat together as we all go towards the 13th general election. But I am sure you know that every one expects you to stumble at any time.

As you have stumbled when you were sacked as DPM by Mahathir.

As you have stumbled when you fronted with Bala and his Statutory Declarations.

As you have stumbled with your promised takeover on the 16th September just after the 12th general election.

As you have stumbled when you took refuge at the Turkish Embassy.

As you have stumbled with your management of PKR’s party election and the subsequent leaving of Zaid Ibrahim from PKR.

As you have stumbled in the choice of several PKR MPs who subsequently left for greener pastures.

And as you know it very well, as you have stumbled when you chose to have Saiful on your personal staff.

And through all this we have been patient and almost, but not quiet,  took it all as an act of God rather then to allow UMNO and Najib to have the credit of putting you through these ‘challenges’. But while your diehards supporters will always be with you no matter what, we are not that forgiving of your ‘stumbles’ if they happen again and again and again. So here we give notice that you are not to stumble again! Ever!

I am duty bound to ABU to fall behind Pakatan Rakyat to do what we all can to oust UMNO! As I am sure many others too are duty bound to do the same but our duty is not unconditionally done. We can think and we can understand the nuances of what you and PKR do. So we go into this ‘arrangement’ quiet willingly but with conditions aforethought! Do good and we will be good. Anything else is not worth talking! Salam brother!