"Thank you to my manager for making me rich!"

Li Na won the Women Australian Open and I just like the way she had her priorities right when thanking her team that helped her win...she said "thank you to my manager for making me rich" you got to respect these Chinese - they know what is important! Way to go! 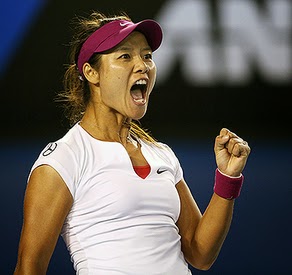 "Best speech ever" was the universal verdict to Li Na's unscripted thanks at the trophy ceremony after she erased two near-misses at Melbourne Park with a joyous victory in her third Australian Open final.
Runner-up in 2011 and 2013, the 31-year-old overwhelmed Dominika Cibulkova 7-6(3) 6-0 to win her second grand slam title and then left a packed Rod Laver Arena in stitches as she paid tribute to her team.
After warming up by paying respects to her opponent, Li thanked her high-profile agent Max Eisenbud for "making me rich" before singling out her husband and former coach Jiang Shan, long the butt of his wife's jokes, for special praise.
"Now, of course, my husband ... famous in China. Thanks for him for giving up everything, just travelling with me to be my hitting partner, fix the drinks and fix the racquets, so, he did a lot of jobs," she grinned as Jiang was ribbed in the players' box.
"So, thanks a lot, you're a nice guy.
"And ... also you are so lucky, you found me."
The speech capped an emotional night for Li, who was so nervous before her match that she decided to take a late afternoon nap to avoid looking at the television or thinking too much about her third appearance in the final.
A flighty temperament has long been her cross to bear and nerves intervened decisively during her first Melbourne final against Kim Clijsters when she took a set lead only to be overhauled by the Belgian and bowed out by taking out her frustrations on noisy Chinese spectators.
It was two unlucky tumbles against Victoria Azarenka that contributed to her loss last year. She first rolled her ankle and then blacked out momentarily after she hit her head on the blue hardcourt.
Despite the disappointments, Li has long regarded Melbourne Park as her special place, speaking of the venue as having an almost mystical air that gets her competitive juices flowing and raises her game.
She felt lucky to survive her third-round match against Czech Lucie Safarova who blazed a winner down the line on match-point, only for the 'Hawk-eye' technology to show it was a couple of inches long.
"Now, I believe this is lucky. At the time, I really didn't think about it as lucky," she told reporters, joking that she would send the Czech an email.
"After I saved the match point I still had to stand another one-and-a-half hours on the court, I still had the chance to lose the match.
Asked whether it was her destiny to win, Li said: "Maybe, because last year I was falling down. That was unlucky, so they gave it back to me for this year."
For a period of time on Saturday, it seemed it was Li's fate to lose a third final, as she handed back two breaks of serve and struggled with an errant forehand.
Taken into a tiebreak, Li cracked a string of huge winners to close out the first set, and with the spell broken, roared to victory with six straight games.

Asia's first grand slam singles winner when she won the French Open in 2011, Li's success and the expectations of 1.3 billion in her homeland have sometimes rested heavily on her shoulders.
A below-par year racked with self-doubt plagued her after she won at Roland Garros and she nearly quit the tour last year when under fire from Chinese media in the wake of an early exit from the same tournament.
She stopped short of saying her second grand slam title would banish the dark days for good, only to pledge that she intended to enjoy her win to the fullest.
She planned to celebrate the Chinese New Year back in her home-town of Wuhan on the Yangtze river with her mother, who remains too nervous to watch her matches and had not yet sent her any congratulations.
"At this moment, I think my tennis is going up," Li said. "In tennis everything can happen. Right now for me, the most important thing is to enjoy it for a couple of days, have a very good Chinese New Year.
"I'm happy to take the trophy back for Chinese New Year. I'll show it to (my mum) for one second and then put it into my house."
Posted by STEADYAKU47 at Saturday, January 25, 2014