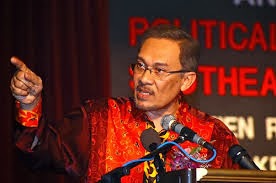 If you read  Wong Chin Huat's   "To Putrajaya via Shah Alam – the maturing of Anwar Ibrahim" you may, like me, feel that this "Kajang Affair" would be one of those times when Anwar and his people has come up with a coherent strategy to move positively towards the 14th general election. With Kajang and Selangor Anwar will have a platform to perform as a CEO of Selangor - as its Menteri Besar! Fours years before the 14th GE is enough time to do this - and to do it well!

There is no doubt that Khalid Ibrahim as MB of Selangor has shown us all what an honest politician can do but honest politicians do not win election. The RM$2 billion reserves that Selangor now has can do nothing for Selangor or Selangorians sitting in the coffers of the state. That money must be utilized for the benefit of the people of Selangor in the lead up to the next general election. Now it seems, it will also be utilized to ensure that Pakatan Rakyat will have the best opportunity to fight UMNO on a level playing field.

UMNO uses the Rakyat's money to fund its more than generous electioneering activities -estimated at around RM50 billion at the last 13th general election. Pakatan Rakayat will have to see what it can do with Selangor's meagre reserves of RM$2 billion!

The question that begs to be answered is "Will Anwar Ibrahim live up to our expectations if or should be become MB of Selangor....the Selangor Sultan be dammed!

In the past Anwar has put a spanner in the best laid plan - starting from the time he was on his way to become Prime Minister of Malaysia. The only person that stood in his way to him becoming PM when he was in UMNO was Anwar Ibrahim himself. He had the numbers, he had the financials and he already had the approval of Mahathir himself to become numero uno...all he had to do was wait. He could not wait and he did not wait....and from a Hero in UMNO he became a Zero!

He may have a clean slate but we have good memories of things pasts!

And herein lies the danger of Anwar getting ahead of himself. Anwar getting carried away with the grandeur of being MB and head of PKR and Pakatan Rakyat....and soon, too soon he will stumble as he had stumble when he was DPM with UMNO. Stumble as he did when PKR had its party elections. Stumble as he does when he forgets the bigger picture of why he is MB of Selangor. Let me remind Anwar that we will accept that he can become MB of Selangor for the following reasons:


Do anything else and he is dead meat.


Is Anwar capable of doing all this? The short answer is "NO". In the past he has shown that he does not have the ability to put the common good of the people who have elected him to office first. In the past he has failed to keep the loyalty of those who have sacrificed much for him and those who have joined PKR in good faith. Always without fail he has chosen to put his own personal interest before party and his political ambitions have triumphed above all else. And I fear that nothing has change and certainly I cannot hope that Kajang will be any different.

I hope I am wrong. I know that Anwar has a good heart and he is a decent man at heart. What he must now do is to tell himself that this next few years will test his resolve to remain good and decent. His personal life must be beyond reproach - even by the the running dogs employ by UMNO to seek out these personal failings that seems to dog Anwar for as long as we can remember. NO MONEY POLITICS, NO CRONYISM,NO NEPOTISM AND CERTAINLY NO SELFISH PERSONAL AGENDAS. Do your job as MB. If you build PKR and Pakatan Rakyat war chest do so by fair means and we will understand. And in everything that you do...HUMILITY!

Do you wish to rise? Begin by descending. You plan a tower that will pierce the clouds? Lay first the foundation of humility.
Saint Augustine.