Aisehman Khalid, the GM of SEDC reports to you! 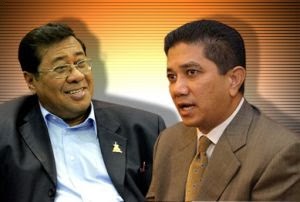 steadyaku47 comment: If Khalid expects me to believe that the removal of Azmin Ali from PKNS board was the sole decision of its General Manager then my respect for Khalid has just gone down a notch. I have my own views of Azmin and they are not very complimentary but I resent Khalid taking us for fools. Common sense tells me that the General Manager of Selangor State Economic Development Corpoartion DOES NOT make a decision to remove a Director from its Board WITHOUT consulting the Menteri Besar of Selangor - who is his Boss!

Datuk Seri Anwar Ibrahim today threw his support behind his loyalist Azmin Ali (pic) to stay on the Selangor State Development Corporation ( PKNS) board, setting up a battle with popular Selangor Menteri Besar Tan Sri Khalid Ibrahim over the state’s main economic driver.
Anwar said Azmin’s removal did not follow proper procedure and, as such, was invalid.
“The general manager does not have the power to remove any board members.
“The decision can only be made by the exco and the menteri besar. As such, Azmin is still a board member,” he said at the PKR headquarters in Petaling Jaya today.