DOING THE "NAJIB A JIB JIB" 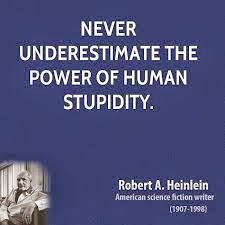 Gone are the days when you had to be precise in your use of the word idiot, morons or imbeciles. There was a time when anybody with an IQ between 0-25 is an idiot, an IQ between 25 and 50 is an imbecile and a moron (derived from the Greek work ‘moros’ meaning dull) was someone with an IQ between 51 and 70.

(Those with an IQ between minus 20 to 0 are politicians but mindful of digressing to parts unknown, we shall leave that for discussions at a later date - let us for now put them in the sub-moron category).

Today some may even use the term ‘low intelligence’, ‘feeble minded’ to describe some one mentally challenged and high BMI (Body mass index) to describe obesity but the plain truth is that in the times that we now live in we need to be politically correct and mindful of not insulting idiots, morons, imbeciles, …politicians included!

Short of compulsory sterilization or legislating to ensure that only the right sort of people bred and the wrong person do not (something that Hitler did attempt to do) we are left with having to accept that there are amongst us inferior and superior types.

Here I must point out that though compulsory sterilization is abhorrent to many of us 33 (thirty-three) US states enacted laws allowing the compulsory sterilization of inmates in State institutions for the mentally ill and mentally retarded – an enactment I would respectfully suggest UMNO consider enacting for some of their current first tier leaders and in some extreme cases, their spouse! Why? Because their welfare and that of society will be promoted by their sterilization. It is better that society prevent those who are manifestly unfit from continuing their own kind to breed! Imagine no more Rosmah, no more Shahidan, no more Rahim Thambi Chik….one generation of imbeciles are enough…but maaf...I digress.

For now, I will not be able to categorize with any degree of accuracy whether those in UMNO and Barisan Nasional are of the superior or inferior genre. A questionnaire sent to their members for the purpose of assessing this has all been returned to us unanswered because they were not in Bahasa! It would seem that English is a foreign language to most of them!

In view of all these considerations and of course the latest moronic decision made by Najib's government to form a syariah Police unit for Jakim (please see the article below) I would like to announce that from today - 27th January 2014, one term and one term only, covers all the actions of these idiots, morons, imbecile, people of low intelligent or feeble minded and that term is “doing the Najib a jib jib!”.

Anytime you see anybody doing anything idiotic or moronic or being an imbecile just tell yourself that he or she is doing "the Najib a Jib Jib!". Amen! 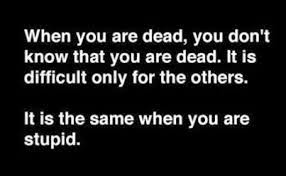 KUALA LUMPUR, Jan 25 — The setting up of the syariah police unit will be finalised soon, Malaysian Islamic Development Department (Jakim) Director-General Datuk Othman Mustafa said today.
He said the department, the Home Ministry and the Royal Malaysia Police (PDRM) would meet soon to discuss the matter.
“The first stage on the setting up of the police unit will be known next week,” he told reporters at a media conference after the Federal Territory Maulidur Rasul celebration here today.
Last night, Home Minister Datuk Seri Dr Ahmad Zahid Hamidi said the ministry would work with Jakim in addressing issues on the enforcement of Islamic laws with the setting up of the syariah police unit.
He said the syariah police unit would comprise degree graduates in Islamic studies. — Bernama
- See more at: http://www.themalaymailonline.com/malaysia/article/jakim-to-finalise-syariah-police-unit-soon#sthash.rxHPj5Xv.dpuf