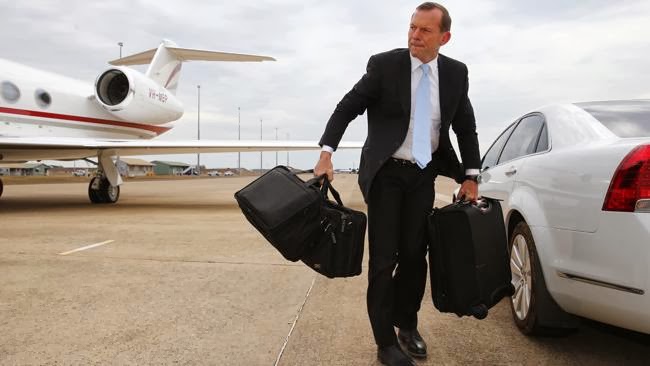 By Jonathan Pearlman
5:33PM GMT
Tony Abbott, Australia's prime minister, has won praise for his frugality after travelling economy class on a long-haul flight to France.
Mr Abbott and his family travelled economy on a flight from Sydney to Paris, which normally takes a gruelling 24 hours in total. His office did not apparently publicise his decision, but his presence at the back of the plane emerged after a fellow passenger broadcast the news on social media.
In similar fashion, Australia's foreign minister, Julie Bishop, has insisted on flying business class rather than first class, and last year rejected her department's plans to book her in to a £1,000-a-night hotel suite in New York. She has been branded "the iron lady" after choosing to do her own ironing while travelling.
Mr Abbott, wearing a blue polo shirt, was travelling with his wife and two younger daughters during the Christmas holidays to Paris to spend a week with his eldest daughter, Louise, who is living in Switzerland. He reportedly rejected an offer of an upgrade.
The former Rhodes Scholar, leader of the ruling conservative coalition, has shown a particularly frugal approach to the trappings of office since his election last September.

He chose to live in a tiny £65-a-night flat at the police academy in Canberra last year while his official residence, The Lodge, was undergoing repairs. He turned down an offer by the public service to put him up in a home rental or in a luxury hotel but it later emerged that his department had already rented him a £1600-a-week home, which remained empty. Julia Gillard, the former Labor prime minister, also reportedly opted to stay at the police academy while leader.
Since he became prime minister, Mr Abbott and his family have continued to live ordinary family lives as much as possible. He has been photographed taking out the rubbish outside his suburban Sydney house; his wife, Margie, has been photographed lugging armfuls of shopping bags from the local supermarket.
Mr Abbott's thrifty approach is in line with his political pledges to reduce public spending and cut the civil service. He has reined in travel costs and introduced a rule that ministers must sign off on all civil servants' expenses above £11,000. Any expenses more than £28,000 must be signed off by the prime minister himself.
"It was a commendable look for the leader of a government preparing to take the razor to the budget this year," observed political correspondent Bianca Hall in Fairfax Media. "And while Abbott's office didn't try to publicise his frugal travel arrangements, they did not go unnoticed... In these days of austerity and belt tightening, no politician can be seen to be living it up on the public purse."
Posted by STEADYAKU47 at Wednesday, January 29, 2014