Strike One to Zahid. Zahid One. Najib Zero!


There have been a  few things said about the recent announcement by this BN government to suspend...I repeat suspend not cancelled ...their previous decision to bring in 1.5 million Bangladeshi over a period of three years. This is what I know of the situation.

The decision to suspend the recently signed MOU agreement to bring in the Bangladeshi was made by Zahid Hamidi in "consultation" with Najib Razak. Najib Razak was away in the US and it was only AFTER Zahid Hamidi made the decision to suspend the MOU that he "informed" Najib Razak of his decision. Zahid made the decision because he understood too well what the Malaysian public thought of the whole caper and its ramifications to his prospect of being number one when the time comes for him to appeal to the electorates to vote for himself and for Umno.  It would be political suicide to bring in 1.5 million Bangladeshis and allow his own brother to profit from the "business opportunity". Zahid was also aware of the negative reaction to what his own daughter had tried to do in defending her father in his decision to bring in the Bangladeshi.

Say what you like about Zahid Hamidi but he knew damm well that while his ascend to the number one position might have been helped by Najib's decision to make him the number two - but ultimately it is to the electorate that he would have to appeal when the next election comes.

He knows that he will have to lead Umno into the next election - a election that Umno can never win without electoral support - support that Najib Razak so has callously disregard  and lost for Umno by the manner he has conducted himself in government and in his private life.

For Zahid the potential financial bonanza for himself and his family that was to have been realized by the "business opportunity" of bringing those Bangladeshi can be dismissed when weighed against doing the right thing to get the public on side if is he is to be number one. There will always be another "business opportunity" on the horizon...even more so when you are number one.

Strike one to Zahid Hamidi. 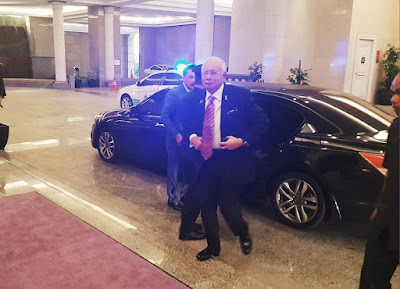 What us interesting is to see is what Zahid will now do next.

You can be sure that Rosmah will have something to say about this because if anyone can see through the bullshit it is her and for sure she will see that Zahid  is made to understand that Najib Razak is number one and he is number two.

We are indeed living in interesting time.