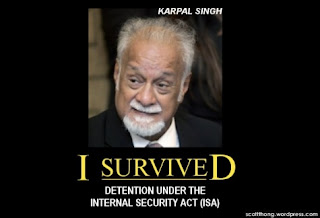 Karpal Singh was detained without trial under the ISA during Operation Lalang in October 1987 for inciting "racial tension" in the country. He was released briefly in March 1988 in response to a habeas corpus application, and remained in prison until January 1989. Amnesty International deemed him a prisoner of conscience. He was arrested again in January 2000 under the sedition Act and charged for making seditious remarks in court during Anwar's corruption trial. This was the only known charge of sedition amongst the Commonwealth nations brought against a lawyer for remarks made in court in defense of a client. He was acquitted in 2002. 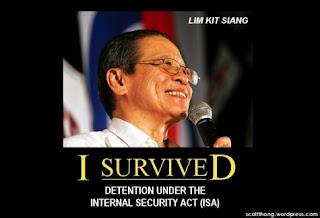 In 1969 Kit Siang was detained under the ISA for 18 months. In 1979, he was convicted of five charges under Official Secrets Act for exposing an inappropriate arms deal between the government and a Swiss company.In 1987 Lim was arrested during "Operation Lalang" for inciting racism. He spent 17 months in prison under the ISA which allows for two years of detention without trial at the pleasure of the Home Minister. 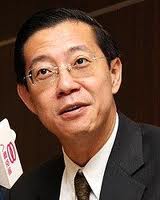 Lim Guan Eng was arrested by Malaysian police in 1994, following his criticism of the government's handling of allegations of statutory rape of one of his constituents by former Chief Minister of the state of Melaka. Tan Sri Abdul Rahim Thamby Chik. The Attorney General decided not to charge Rahim Thamby Chik but Lim was charged under Section 4(1) (b) of the Sedition Act 1948 for causing 'disaffection with the administration of justice in Malaysia'. Lim was also charged under Section 8A (1) of the Printing Presse and Publication Act 1984 for 'maliciously printing' a pamphlet containing allegedly 'false information' because he had described the alleged rape victim as an 'imprisoned victim' because she was initially detained by Malaysian police without parental consent for 10 days.  After a series of appeals, Lim was sentenced to 18 months imprisonment. He was released after 12 months on August 25, 1999. 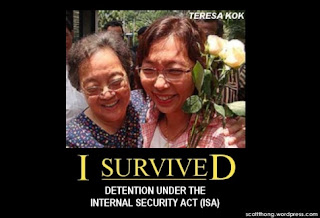 Teresa Kok was arrested on Friday September 12, 2008 under Section 73 (1) of the (ISA). The Malay newspaper Utusan had reported Kok had "advised" a mosque in Puchong not to use loudspeakers while making the azan. Teresa Kok denied the allegation. The Selangor state government was giving all parties involved in making the claim a week to issue a retraction and apology.
It was found out later that a faulty loudspeaker system was the reason why the mosque did not broadcast the azan. Furthermore, while there was a petition sent to the mosque, the petition requested for the mosque to lower the volume during 'ceramah' or sermons and not during azan. The administrator of the mosque as well as the petitioners also confirmed that Kok was not involved in the petition.She was released on 19 September 2008. 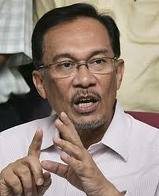 Anwar was arrested during student protests against rural poverty and hunger.  He was imprisoned under the ISA and spent 20 months in the Kamunting Detention Centre.