Let me be clear on one thing before we go any further. I accept that we have diverging viewpoints on many issues now facing our nation. What we must do is to put forward our own views with clarity and rationally. By doing this we hope that those who read what we write will agree or disagree with in a civilized manner and in so doing we will be able to establish a dialogue and move forward towards a better future for our country.

We need to make sense of all that is happening in our country today. The vast majority of Malaysians are silent. They live in hope. Hope for things to change. Hope that Pakatan Rakyat will realize the potential they promised. Hope that politics for the people and by the people will rule the political landscape sooner rather then later. The vast majority hide their anger in their heart. To protest in the street would mean being bludgeoned by PDRM – worse incarcerated under the ISA. But it is our country. We cannot let it fail. 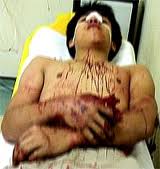 There have been changes. The age of PDRM murdering suspects in their custody and gunning down suspects at will and without due process is almost over. The clamour and chatter over the Internet with the recent deaths sends a timely message to PDRM that the age of impunity is over. Custodial death requires the collusion, at the very least, of PDRM, political leaders and the Judiciary if the deeds are to be silenced without adverse consequences to those committing it. This is no longer possible if every such acts are brought into the public domain in real time: as it happens! This is happening now and we are the better for it. 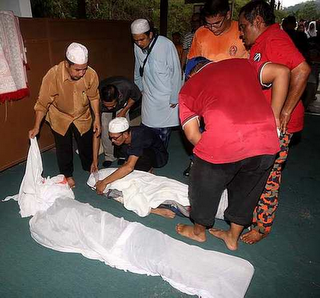 As with the landslide that happened at the orphanage in Hulu Langat. It cannot get any more heart rending then this! At least 16 children dead! As young as 8 years old. Not just children but orphans! Children putting their faith and their lives in the hands of those that care enough to look after them.

Let us not get into the peripheral cause of it: Heavy rain, the orphanage built on a slope. Responsibility lies with the Hulu Langat Municipality! With the Ministry in charge. At how these Municipalities are allowed to become another means of income for politicians and those that work within it. For these politicians and those responsible, the deaths of those orphans are simply collateral damage! Full stop!

The same with Lynas Corp. Lynas Corp will not build the same refinery plant in Australia simply because they will not be able to meet the stringent environmental compliance required by the Australian government. Full stop.

The Radiological Impact Assessment by Nuclear Malaysia confirming that the storage of Lynas rare earth concentrate at the LAMP plant in Malaysia does not pose any public risk is as dependable as Najib’s promise of open government. An exercise in futility! Lynas is as safe as the manner in which BP had assured the USA that the Deepwater Horizon Oil Spill should never, could never and would never had happened! An oil spill in the Gulf of Mexico that killed 11 men, injured 17 and cause the largest accidental marine oil spill in the history of the petroleum industry. But that is knowledge only after the fact.

If they are safe why should Lynas take the additional safety step of placing those residuals in safe, reliable engineered storage cells designed so that there is no possibility for any leakage of material into the government?

Why does Lynas have to have such strict conditions imposed by AELB (Malaysia’s Atomic Licensing Board) and why must it agree to place funds with the Malaysian government to ensure safe management of any remaining residues?

But, and this is the most telling of all our concern: The consistency by which the Barisan Nasional government has time and time again exhibited its inability or lack of political will to adhere to the “best practice” management essential to ensure that the operations of Lynas Corp does not pose any danger to the people of Gebeng and its surrounding areas! No insistence of the 30 kilometer buffer zone required in Australia of any such operations! Etc etc

Our concern is the toxic by-products created by Lynas at its processing plant in Gebeng, Kuantan as it manufactures the minerals required. Why allow any toxic by-products to pollute our country? Has this issue been politicised. Certainly! But there must be a core of truth for this issue to now take a life of its own and become a cause for embarrassment for the Australian and Malaysian government. Rest assured that the MB of Pahang and the Menteri in change have made their money from this “business opportunity”. Now it will be Lynas Corp that will bear the brunt of the people’s anger.

So you see friends there are so many issue that we need to “talk” about. But I seem to be talking to myself. The NGO’s, the activists and the politicians that do care seems to be out front without the comforting presence of the Rakyat.

Is it not time that the people cast off their apathy? If you do not do so now it might be too little too late and both happening very soon. Let us put the fear of God into the powers that be to let them know that they cannot ignore our demands at will. And only the physical presence of the Rakyat can effectively tell the BN government that enough is enough. Sit down and spend time thinking of what your role could be when another Lynas is exposed. When another death in custody becomes a fact. When this Ibrahim Idiot again does his rant about the Christians being a threat to Islam. To the believers the Christians can never be a threat to Islam just as Islam can never be a threat to the Christians!

But we cannot stay quiet.
We cannot be quiet.
And we certainly cannot continue to be quiet.
Act and act decisively for this is our country.
We cannot let it fail

I have been following your blog for a while now and as what you pointed out, I do not agree with your views at times but fundamentally, we should agree that at times, we can disagree with each other. In the current context, anyone who disagree with the BN Govt is labelled a traitor, and is disloyal to the country. And the MSM are propagating their lies and deceit.

As one of the silent majority, I do feel ashame that we are not doing enough. I do my fair share of donating to the opposition parties and execising my right to vote but I believe there is much more we can do. We have all kept our peace and silence for too long because most of us are HOPING that things will change for the better. But will it? The rural folks are quite ignorant about the follies of BN and realistically, BN will still rule albeit with a lower majority after GE13. UNLESS there is a seismic shift in the rural votes.