What the non-MALAYS wants to know about the MALAYS answered here!

Never let it be said that steadyaku47 does not give due regard to the directive from the powers that be, that the flavour of 2010 will be Ketuanan Melayu. To give due respect to this emphasis on all things Malay, steadyaku47 will today examine what every non-Malay have wanted to know from the time these non-Malays first landed in this great nation of ours – some coming from as far as Kerala in India….but I digress.

Today the Chinese will sometime ask their trusted Malay friends if they think that the two M’s (Mahathir and Muhyiddin) would openly make a move against that son of Tun Razak.

Those Indians that are partial to the days of Samy the Velu might dare to ask any Malay YB’s they know if there was a possibility of Samy coming back: and if the YB is a diplomat he will insist that Samy is needed to canvass business for Malaysian Contractors in India: i.e. that Malaysia needs Samy more then MIC needs Samy!

The Ibans and Dayaks might ask any Malay visiting their state if it was true that the Malays in Semananjong will be proclaimed to be the First amongst Equal even in their State!

But we all know that these are all small talk. The real question to be asked has not been asked simply because it is not polite to do so unless you know a Malay very well. Protocol and good manners prevents any non-Malay from asking any Malay of the gentler sex the same question. In the spirit of 1Malaysia let me ask the question and attempt to give you an answer.

What does a true Malay wear under his Sarong!

There I have asked the question! Will a true Malay answer the question! This is a serious academic exercise to determine the truth and nothing but the truth. No attempt at hilarity by saying that zippers can injure a man’s pride and wearing a Sarong don’t….or a Sarong with underwear is just a long skirt! But we will accept jokes done in good taste......and if you want to tell us stories about the Sarong and its uses after circumcision etc etc...you are welcome.

As for being a “true” Malay…anybody who knows what “apa khabar” and “bumiputra” means, qualifies.

First answer from me: This was my conversation with Cheah last night: 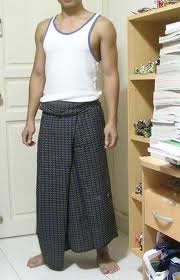 Now that is me....different folks different strokes. Now will any other true Malay, in the spirit of 1Malaysia, help to unravel this mystery and help to answer what our non-Malay friends are dying to know! Camna?

Any non-Malay using a sarong can also contribute their two cents worth as "guest artists" but please no offensive language and be nice!

Email ThisBlogThis!Share to TwitterShare to FacebookShare to Pinterest
Labels: A Malay, sarong