Muhyiddin Yassin : Najib watch your back!

Loyalty in UMNO is loyalty given when it serves the purpose of the giver. Like truth, loyalty has no place in UMNO and certainly not in Barisan Nasional. 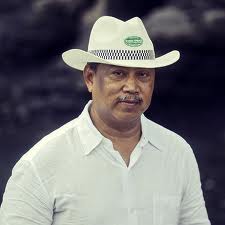 For Pak Lah, this Muhyiddin Yassin was a friend. Someone he felt comfortable with, a friend to be depended upon. When Pak Lah expected Muhyiddin to stand beside him because he was not strong enough to stand on his own, Muhyiddin moved against him in haste and with malice. I say to Najib now….watch your back.

Muhyiddin has calculatingly entrenched himself with Mahathir and Perkasa to overtly advance Ketuanan Melayu as his cause celebre. He has done so in spite of knowing full well Najib’s commitment to make 1Malaysia the corner stone of his administration. A few days back Najib gave a lecture titled "Coalition of Moderates and Inter-Civilisational Understanding" at the Sheldonian Theatre at Oxford University. With hand on his heart Najib committed himself to a “ a society that is multi-racial, multi–religious and multi-cultural.

Muhyiddin in the same time frame, was in Kangar declaring that “UMNO’s struggle is to bring development to the Muslim community, which is the majority group in the country! We are certainly a Muslim nation. If PAS campaign about wanting a Muslim nation, we already have it. Ever since independence, our main focus was to champion the cause of Islam” 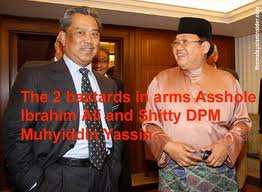 Najib and Muhyiddin are both in the same foxhole. Now who is braver? Who will blink first? It is not good sense to share a foxhole with somebody braver then you! What does UMNO want to look for in their leader? Najib to lead them towards multi-racial, multi–religious and multi-culturalism or Muhyiddin who champions Islam and Ketuanan Melayu?

Muhyiddin has made his choice. What he did to Pak Lah he will now do to Najib – demi kepentingan Bangsa, Ugama dan Negara!

Let us look at history. UMNO mobilize all its resources after the May 13 Riots to redefine nationalism within Malaysia as being “Malay First”, taking Malaysian away from the multicultural nationalism pursued by Tunku. UMNO successfully galvanized the Malay community in the 1970’s towards policies favouring this “Malay First” sensibilities. Somewhat akin to the “Ketuanan Melayu” rhetoric’s now being touted by Perkasa and Muhyiddin.

In the 1990’s Mahathir attempted to define the national identity of Malaysia through his Bangsa Malaysia aimed at bringing greater national integration among the various ethnic group within Malaysia. But Mahathir used this Bangsa Malaysia as a means to achieving his own ends: Authoritarian rule at the costs of individual liberty and rights of the people. This saw the explosive birth of the Reformasi movement headed by DSAI, which seek liberal political reform for the nation.

The demand by the people for greater individual liberty and liberal political reforms as against the authoritarian control by UMNO is still the fundamental roots of the problems we have today in Malaysia.

Pakatan Rakyat seeks greater individual liberty and liberal political reform for the masses.
UMNO seeks to maintain its authoritarian control over Malaysia to maintain its hold over Malaysia. To do this UMNO must have two third majorities within parliament. This was lost in the 12th GE. A simple majority enabled UMNO to form government but its loss of five states and 51% of the people’s vote has meant that its “moral right” to rule has been lost. There is now a credible opposition within Parliament.

All that UMNO has done while in government are now subject to scrutiny: Past, present and certainly for the foreseeable future. The abuses and excesses in the past by UMNO are no longer something that the ISA or the OSA can keep hidden from the public domain. Increasingly corrupt practises; money politics and abuses by those holding high public office are being exposed. This deluge of exposure will surely turn into a torrent if not a tsunami should UMNO lose the 13th GE.

And so we come to today.

UMNO need to win the 13th general election. What Najib wants in multi-racial, multi–religious and multi-culturalism is at odds with what UMNO wants.

Munyiddin sees his political advancements towards the Presidency of UMNO and the Prime Ministership as being one with what UMNO wants: i.e. Ketuanan Melayu and having Islam as the official religion of Malaysia – not for its religious connotations but for what Islam could do in advancing UMNO’s cause amongst the Malays.
I remember Muhyiddin with his chest all puffed up standing in Najib’s place with the Australian Prime Minister visited Malaysia recently. I see Muhyiddin jumping to Utusan Malaysia’s defence every time that daily slams the Chinese. Racial gutter politics is Muhyiddin forte. Muhyiddin is a Malay first and Malaysian second! And 1Malaysia is not the way to go! Muhyiddin is the Malay champion.

I think the Ketuanan Melayu and Religious issues have now taken on a life of its own. Nazri’s recent free speech for all utterances is to Muhyiddin favour and will open the floodgates for Perkasa and its maniac racial and religious utterances.

KUALA LUMPUR, May 20 — Standing by his decision not to haul up Datuk Ibrahim Ali for threatening a “crusade” on Christians, Datuk Seri Mohamed Nazri Aziz has pledged the same treatment for all similar transgressions in the future.
“It is not just the opposition politicians but also those in the Barisan Nasional (BN). In fact, anybody at all... bloggers and so on,” he told The Malaysian Insider when contacted.

“The landscape has changed. Sensitive matters are now being discussed in the open.

And I am eagerly waiting for the first Chinese or non-Malay brave enough (read foolish here!) to test the waters.

Najib is committed to his multi-racial, multi–religious and multi-culturalism but to what end? Muhyiddin will play to the Malay gallery but Najib cannot. Muhyiddin will have Perkasa and Mahathir with him, Najib does not. Najib is UMNO’s President for now but that does not mean he will remain one in the run up to the 13th GE. Najibs high jinks in Mindef will dam him. Rosmah has upset enough wives of Ministers and UMNO’s first tier leaders to not be of any help to Najib. And Altantuya is a demonic sword poised millimeters from his pudgy neck  - waiting to swing downward when it suits UMNO.

“Even if it took many years before it became a reality, Altantuya was the nemesis of Najib’s poitical career…….”

Email ThisBlogThis!Share to TwitterShare to FacebookShare to Pinterest
Labels: Muhyiddin Yassin, Najib watch your back