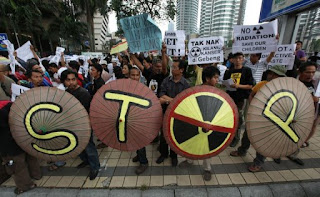 Updated May 20, 2011 21:15:20
Protestors have rallied outside the Australian High Commission in Kuala Lumpur demanding that a rare earth processing plant be abandoned.

The plant being built in Malaysia by Australia's Lynas Corporation will refine rare earth minerals from Western Australian iron ore. But the material contains the low level radioactive element thorium - and Malaysian activists say Australia should process it at home.

Correspondent: Zoe Daniel
Speaker: Rozaini Mohammed Rosli, spokeswoman for anti-rare earth Lynas refinery activists
DANIEL: The campaign against the Lynas plant seems to be gaining momentum. Activists who have been voicing their opposition in the media have now held a rally outside the Australian High Commission in Kuala Lumpur.

Spokeswoman Rozaini Mohammed Rosli says they submitted a memorandum to the high commissioner explaining their concerns - and demanding that the plant be stopped.

ROZAINI: Being an Australian company, the people of Malaysia would like that company to shift, operating their own operations in Australia, and not come here and establish any operational factory or such.

DANIEL: The plant will process iron ore shipped from WA that contains the low level radioactive element thorium.
The lucrative rare earth minerals obtained will be used in high tech batteries, TVs, mobile phones and aviation technology.
Within two years, the plant is expected to meet a third of world demand for the materials outside China and will yield 1.7 billion dollars a year in exports.

But the activists say Malaysia doesn't need it. The country is still cleaning up an old Mitsubishi Chemicals rare earth plant at Bukit Merah that contaminated the area and caused birth defects and leukaemia in the population.

Rozaini Mohammed Rosli says another plant is not worth the risk.

ROZAINI: We don't have a guarantee for the safety of the people in the future.

DANIEL: Do you think it's realistic that the Malaysian government will stop the plant from going ahead, when it's at such an advanced stage?

ROZAINI: They have to be a responsible government. They have so far, declined to expose any kind of information to the people. They should have consulted the people before engaging, or even thinking of having such a plant in the country.

DANIEL: But do you realistically think you can stop it now?

ROZAINI: We will try our best.

DANIEL: Is there anything that the Lynas Group could do to alleviate your concerns?

ROZAINI: Yeah, they can just stop the plant from continuing.

DANIEL: But the Lynas plant is almost complete and should open before the end of the year. The company says it will be processing ore with radioactivity less than 20 times lower than the old plant that made people sick. In a statement though, Lynas Corporation says that it respects the community's right to speak out about the plant and welcomes the appointment of an independent panel to study the project.