In search of Tunku, Tun Razak and Tun Hussein. 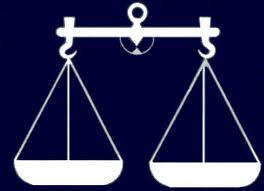 UMNO have need of these three past leaders if UMNO is to be relevant again to the people of Malaysia and to the Malays.

In the wisdom of Tunku we can find the essence of 1Malaysia. The son of a Sultan he was the father of multiracialism and in his personal self a politician totally lacking abrasiveness. Sometimes a rascal in his private life but always a gentlemen in the way he lived his life to the very end.

In Tun Razak UMNO will have need of his resolve to put nation before personal, party and racial consideration. And his concern for the rural Malays is genuine and not intended to build a “vote bank” for UMNO.

Hussein Onn would never have tolerated the proliferation of money politics, nepotism and greed that started and flourished under Mahathir. Dato Harun Idris, amongst others, found this out at his own personal costs. 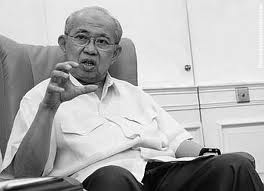 One of the legacies of these three icons in UMNO can still be seen in the person of Tengku Razaliegh. Ku Li was our Finance Minister in the 1980’s and the founder of Petronas. He had weathered many political storms both within and without of UMNO but in all this he had emerged with his integrity intact and our respect for him as a person, unblemished. Despite still being in UMNO he is held with much affection by the people of Malaysia – because like Tunku, Tun Razak and Tun Hussein – his sense of duty to the Rakyat and the nation overcomes all other personal consideration. 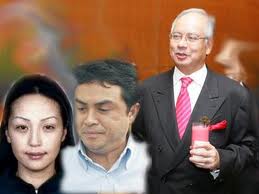 Today UMNO has Najib. A Najib that presides over a crumbling UMNO bereft of respect from the people in Malaysia – what more the Malays that they profess to champion. And always for Najib, with Razak Baginda and Altanatuya steadfastly by his side.

How could the Malay want UMNO as its champion when it tells the Malays that they are a lazy people? That the Malays need to be spoon fed by UMNO if they are to survive in commerce and industry? An UMNO that continues the fiction that the other races will take our livelihood and our religion away from us? An UMNO that takes for itself what should have been for the Malays – projects, tenders, wealth and all else that could have empowered the Malays to be able to hold their own amongst the other races in Malaysia?

We have Mahathir (with camera running full onto his face) telling us that taking bribes is akin to eating pork! “Macham makan babi” Tell me then how many UMNO members have “makan babi” 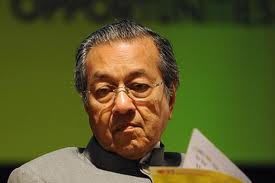 Was not Mahathir’s son being bail out by MISC “makan babi”?

What about Khir Toyo mansion? Big feast of  “makan babi”?

What about Najib’s offer of RM5 million in Rejang Park if BN candidate Robert Lau wins? Is that not feeding “babi” to the people of Sibu? Even if the people of Sibu do eat pork should a Muslim offer to feed them “babi”?
This is the UMNO that we have now! Makan babi!

Just take five and read this part of an interview about suicide bombers between Liam Bartlett (Australia 60 Minutes) and Tariq Hayat Khan, Pakistan Political Agent of the Khyber political agency.

TARIQ HAYAT KHAN: The two suicide bombers whom I had the opportunity of arresting while I was in the field were both having an IQ level of below 50. That is virtually a moron.
LIAM BARTLETT: Law Enforcement Chief Tariq Hayat Khan says the terrorists prey on simple minds, promising untold pleasures in the afterlife.
TARIQ HAYAT KHAN: Persuading a moron that 70 fairies  are waiting for you in Paradise when you blow yourself up, you’re going to land in their arms.
LIAM BARTLETT: 70 virgins?
TARIQ: And they will catch him in their arms. Gullibility has no limits.
And the same is true of UMNO. There are too many within UMNO now who truly believe that their fight is for the Malays and for Islam. Like the morons who are gullible enough to “volunteer” to be suicide bombers, there are enough UMNO members now who will do the bidding of UMNO’s warlords to do all that is needed to ensure UMNO remains in power after the 13th general election : But at what costs to us and our nation?

A Jihad to be waged against the non-believers as is now being talked about by Perkasa? Already Nazri, on behalf of UMNO of course, has given approval to Ibrahim Ali to carry on regardless with this agenda! How soon do you think before Pemuda UMNO joins the fray? And if the non-Malays takes up Nazri's offer to do the same...what then?

We see already PDRM and MACC doing UMNO’s dirty work for them - death of people in their custody in their pursuit of those who they perceived to be UMNO’s enemies!

UMNO’s unmitigated gall to manipulate and manage the Judiciary for their own purpose: Just think…we have a Chief Justice, Tun Zaki Azmi, who was the former Legal Advisor of UMNO!

“As UMNO’s legal man, he was involved with the party’s myriad scandalous financial misadventures that were bailed out by the government in the heydays of former Prime Minister Mahathir’s crony-capitalism during the last Asian financial crisis. One prominent example is the RM 3 billion loan scam in the disastrous acquisition of Philippines’ National Steel Corp. (NS) by UMNO’s financial proxy Halim Saad. When the shares of NS became scrap, four top Malaysian banks were made to stomach the entire RM 3 billion losses. And Zaki was then a director of the investment vehicle — Hottick Investment Ltd of Hong Kong — which borrowed the RM 3 billion and embarked on the acquisition of NS.

Apart from acting as UMNO’s nominee, Zaki also has held directorship in scores of major companies including some of the most well known names such as Berjaya, Metacorp, Pan Global, SP Setia, Malaysia Airports,Hume, Matsushita Electric, Pharmaniaga etc. Zaki was reported by Bernama on 21 April 2007 to have said that his 58% owned Emrail Sdn Bhd, a railway specialist company, had only the government as employer, and that he was earnestly soliciting contracts in the northern and southern portions of the double-tracking project to turn the cash-strapped Emrail around.

Such apolitical and business background would already have made him a poor candidate for any judicial appointment, Zaki is battered by yet another serious handicap — the question of his moral integrity arising from his controversial marriage and divorce from his second wife Nor Hayati Yahaya, who was half his age.
Zaki married Nor Hayati in a ceremony conducted by a minister from Thailand in a textile shop in Perlis in March 2005. They separated three months later. In the messy divorce that ensued, it was revealed that Zaki burned the original marriage certificate to hide the marriage from his first wife. Further, the marriage was ruled by the Syarah court as illegal.

Enough said about our Judiciary – all that and an Attorney General whose moral compass went astray the way the Chief Justice and other UMNO leaders have gone: with their brains caught in the zipper of their trousers!

Anything and everything is not sacred to UMNO in their relentless grab for continued power!

And so we come to today. If Pakatan Rakyat were to take the bait that UMNO has been dangling in front of them our country would have descended into strife and chaos many months ago! If Pakatan Rakyat had not been more disciplined and resolved in its determination to stay away from racial politics we would now find Malays and non-Malays at each others throats by now! If Pakatan Rakyat had not made itself impervious to the extreme provocations and damnations hurled to their leaders by UMNO where do you think we will be now? 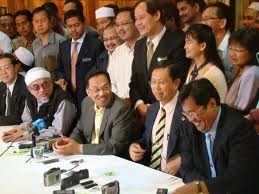 The days of Reformasi were heady and full of passion but it has no place in the times that we live now. We need resolve and a quiet discipline. We need a steely determination to go head to head with UMNO and not blink! We need belief in the ability of our Pakatan Rakyat leaders to stay the distance and be firm in their resolve to do what is right for our country. And above all we know we are right. We know we have good on our side. We know that we will overcome UMNO and the evil it represents. We fight our battle with Karpal Singh, Lim Kit Siang, Tok Guru, Hadi and DSAI.

Email ThisBlogThis!Share to TwitterShare to FacebookShare to Pinterest
Labels: In search of Tunku, Tun Razak and Tun Hussein