Let us not dwell too long on the right and wrong of yesterday's arrest of Lim Guan Eng for corruption.

Let us not parade the litany of intimidation, harassment and persecution of many others by this Umno led BN government of those who have rightfully questioned the odious use of political power for personal financial gains.

Do not waste anytime trumpeting the erosion of our civil rights and the abuse of democratic process and institution within our nation by a BN government hell bent on imposing its draconian rule upon us all.

Let us instead understand that this Umno led BN government arrested Lim Guan Eng because they can do so with impunity.

And having done so they will now proceed to do what they want with him  - detain, harass, intimidate, and put him to trial knowing full well that the judiciary will do their bidding.

We know this is the way of this Najib led BN government.

They have effectively taken a willing PAS under their wings. Anwar Ibrahim is incarcerated in Sungai Buloh and is effectively neutralized, isolated, silenced and unable to do his duties as leader of the opposition. So far they have nothing on Lim Kit Siang. And for reasons best known to Najib and his cohorts, they have decided to take Lim Guan Eng out. Out of DAP, out of Penang and out of the opposition and do to Lim Guan Eng what they have done to Anwar Ibrahim....and, if the past is any indication of the future, they will be able to do just that di dalam masa terdekat.

Ask yourself why, if the opposition did win the popular mandate at the last election...why has it come to this?

Why is the leader of that opposition that won the popular mandate to govern Malaysia  now in Sungai Buloh?

Why has so many of those opposition leaders who were given the popular mandate to govern by the electorate in the last election been punitively pursued by this Umno led BN government and have been persecuted and prosecuted in a manner that has not been seen since the time of Mahathir?

Why has it been possible for this rampaging Umno led BN government to do it's worst upon our people, our leaders and anyone else that stands in their way to another term of plundering and pillaging of our nation coffers for their personal gain?

The simple answer to that question is..... "because we let them!"

What has this Umno led BN government not done in this past decade?

Corruption and arrogance pales in the face of what has since happened with 1MDB and that RM2.6 billion donation.

And after the farce of that Altantuya murder trial we have seen a growing number of more murders done for political and criminal gains that can be linked directly to the leaders who now govern our nation.
And still we are quiet?

And now you wonder how is it that this Najib led government dares to even think that they can get away with arresting arguably one of the most important leader within the opposition, on a charge of corruption...... when Najib himself is unable to explain the hundreds of millions of Ringgits in his own personal bank account?

And so I again repeat what I say before....the simple answer to that question is..... "because we let them!"

I wish...I hope against hope...that the arrest of Lim Guan Eng would galvanize the opposition and millions of Malaysian to unite themselves and stand as one against this corrupt regime of Najib Razak....but I know it is wishful thinking.

You and I know that the opposition is now in disarray. Unity among the coalition that once was the all conquering Pakatan Rakyat is in tatters. Any hope for the opposition to stand united in facing yet another obvious attempt by BN to neutralize another opposition leader can be thrown to the wind.

Najib and his cohorts are systematically and effectively taking the opposition apart and breaking down each political entity within the opposition in the best way they know how....taking out it's leaders and silencing others who dare to stand up and voice their opposition to BN.

And this, they will continue to do, until the next election is upon us.

By then, if we allow them, there will be no Opposition Front to speak of and Umno will win another five years to pillage and plunder our nation.

I and many others can write about this everyday....but for what purpose?

Many thousands of you can turn up for demonstrations and protest to their hearts content against this abusive and vengeanful BN government...but again for what purpose?

Anwar has been arrested and incarcerated. So have many others...and now Lim Guan Eng. ...and all this again, for what purpose?

What else has to happen before those in opposition to this Umno led BN government understands that united we stand...divided we fall? 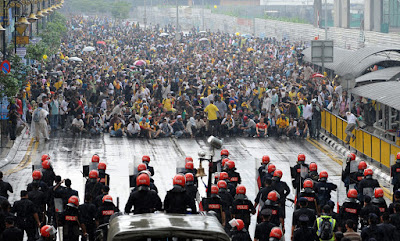 I am not fed up of how this BN government behaves.

I am not even angry anymore that there is so much corruption and abuse of political power for political and personal gain.

I am past being amazed at how blatant this Najib led BN government is in advancing their own political interest at the expense of any sense of justice or fairness to any one else.

And I know that they do all this with impunity and arrogance because they can get away with anything they want to do.

All this I have seen being done over these last two to three decades.....and today....no yesterday....that arrest of Lim Guan Eng is but just another line that this BN government dare cross to again test our resolve...the people's resolve....to grin and bear it.....or .....will the people say "ENOUGH!".

Ask yourself what you will do now? Have you reach your tipping point? Have you had enough of the abuse heaped upon us all by this Umno led BN government?

And more critical to us all...will all those leaders in different political entities standing in opposition to this corrupt Umno led BN government come together and stand united with all of us and start the process of being one again to face BN at the next general election?

And before any of those leaders within PKR, PAS and DAP answers these doubts that we have of their ability to stand together among themselves and join us in our struggles against BN, let us once and for all put to rest what race and religion has to do with all this.

Many of us do not really care who leads the opposition. Race, religion, gender and age is of no concern to most of us. We are driven by one thought and one thought only....we want a responsible government and all that comes with it.

But even as we want that responsible government to the exclusion of almost anything else, we will still not accept any individual that seeks to use that want of ours for their own political or personal  advantage at the expense of ours. So be true to what we ask of you and do not ever abuse any trust we may place in you, for personal gain - political or financial.

For now there is nothing within the opposition horizon that speaks of hope and possibilities of change. None whatsoever. Zero. Naught. Kosong.What else need to happen before this change? Your thoughts on this is as good as mine......