They cannot stop us....and Kit Siang is not a Chinese and I am not a Malay. We are all Malaysians first.

So Umno thinks they are in total control of all things Malaysians! They can ram through legislation in Parliament. They no longer answer questions of public interest by stone walling or simply dismiss, ignore or just not giving the answers that our representatives in parliament asks them. They arrest members of parliament at the very gates of parliament or anywhere they chose to do so. The Judiciary do their bidding. PDRM act as their bully boys to harass, persecute, intimidate, detain, arrest and persecute at will any one this Umno led BN government think to be a threat to them. This BN government keeps an uneasy truce with the civil service by using a big stick to intimidate and harass civil servants and periodic bonuses and raises in salaries which this nation can ill afford. Everyone else that has any dealings with government are under their spell as intimidation and money are used whenever needed to keep them all subjugated.

It would seem that way if you are easily intimidated.

It would seem that way if you are impressed by superficiality and easily persuaded by the main stream media, one sided television programs favouring the BN government or the endless threats to punish and imprisoned any one that is a threat to "national security".....a euphemism for the Umno led BN government...though I submit that a "corrupt and arrogant" BN government, would be closer to the truth.

Let Umno think what they want.

Let BN do their worst.

Let Najib think that cash is King and he being the man with billions in his bank account is the King.

They cannot block every blog that tells our people that these Umno and BN leaders are pillaging and plundering their country.

They cannot prevent every Malaysian from thinking, wanting and doing what is best for themselves and for their country.

They cannot bludgeon every demonstrators and every protestors that dares to stand against the might of this odious corrupt government into submission.
They cannot detain, arrest and incarcerate every dissident, every anti government activists and opposition politician that stands in their way of governing this nation of ours for their financial gain and political advantage.

And when the next general election is upon us, there is nothing they can do to stop our people from voting to elect them out of government and out of our lives.

There is nothing they can do, unless they intend to not let us chose those whom we want to lead us!

Do you think they will do so?

Do you think Najib and this Umno led BN government will dare to even consider this possibility... or do you think that they already have in mind to do just that?

Do not jump to conclusion. Do not second guess what they will or will not do.

In a fight with Najib and this Umno led BN government we cannot control what they will do.

We can control only ourselves!

Courage to face those who are against them when the odds are not in their favor.

Courage to stand up for what they believe in if they think they will lose what they have.

And of course they cannot teach their people to have the courage to do what the opposition have been doing all these years....persevere and continue to fight for what they think is right...no matter the odds.

And this courage that I talk about.... many of us and our leaders have by the spadeful.

Almost all leaders in the opposition have  faced time in prison.

All leaders within the opposition have been under the threat of going to prison.

All have had the probability of losing their ability to earn a living, to feed their family or even lose all that they have, thrown in their face by the Umno led BN government just because they oppose the government.

But physical and mental threats to their personal self no longer trouble any one any more.

Today going to prison is par for the course not only for opposition leaders but for opposition supporters too....and we expect physical and mental abuse to be meted out by PDRM upon anyone of us at any confrontation - peaceful or otherwise. 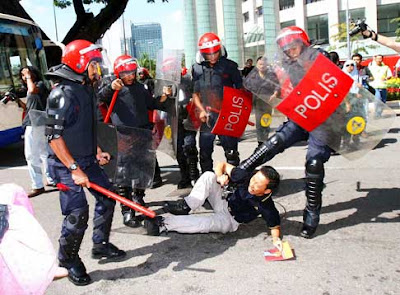 And yet as ready as we are for anything that this corrupt and arrogant Umno led BN government can throw at us, there are still times when our leaders and us are moved to tears.

And today I see that Lim Kit Siang has been moved to tears when an idiot of a state mufti classify non-Muslims Malaysians as “kafir harbi” who could be slain. 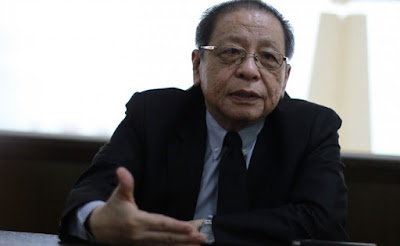 No my friend...to me Lim Kit Siang is not a "kafir harbi" nor is he a Chinese. He is not a Chinese and I am not a Malay for we are all Malaysians first.

This Lim Kit Siang is also a Malaysian admired and respected by many Malaysians.....any Malaysians .....and then, somewhere in that mix...he is also a Chinese.

But if anyone seeks to malign and unfairly chastise the Malays, I will not be quite and I know what I will do....and so will Lim Kit Siang know what to do if any one seeks to malign and unfairly chatise the Chinese  for we will not hesitate to defend our own, for that too is the way of Malaysians. What will we do?.....remember this from Pulp Fiction?

So when Kit Siang cries I too am moved to tears....and so should you if you care and has love for this nation of ours.

Once you and I are done crying...let us all think together what we need to do together to ensure that there will be a general election when one is due...and that we can, in that general election, choose the government we want without fear or favor.
All this starts now...you must understand that the fight starts now....in earnest. Send a message, in any way you can, that if this Umno led BN government is thinking about NOT having a general election to ensure that they WILL continue their pillaging and plundering of our nation for another five years....you must send a message to them that you will not stand for it.