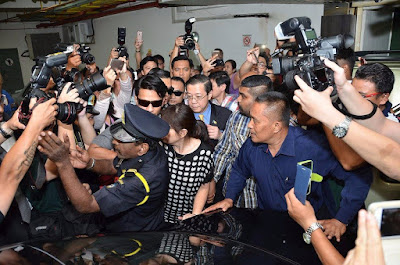 Lim is being investigated over allegations of corruption for the purchase of his RM2.8 million (S$938,000) bungalow on July 28 last year, according to the New Straits Times (NST).
His house purchase was also linked to the state's sale of state land in Taman Manggis to Kuala Lumpur International Dental Centre (KLIDC), the NST reported on Wednesday (June 29).

Penang Agriculture, Agro-based Industry, Rural Development and Health Committee chairman Dr Afif Bahardin tweeted at about 5.50pm on Wednesday (June 29) that Lim would be taken to the MACC office soon.

"Arrest warrant has been issued to Chief Minister by MACC officers, he will be taken to MACC HQ anytime soon #penang," Dr Afif said.

DAP advisor Lim Kit Siang in a tweet said: "Guan Eng arrested by MACC on two charges of corruption and will be produced in court tomorrow morning."

Earlier, The Star Online reported that officers from MACC were at the Penang Chief Minister's office in Komtar while Lim was chairing a meeting of the state executive councillors.

At 4.55pm, five to eight officers arrived at Lim's office on Level 28. They entered a meeting room and waited inside.

It is learnt that the weekly state exco meeting was still going on at press time and there is a possibility that the officers are waiting to arrest Lim, who is DAP secretary general.

In a statement on May 25, the MACC said it has completed its probe into Lim's Pinhorn Road bungalow purchase and submitted the investigation papers to Attorney-General Tan Sri Mohamed Apandi Ali.

The MACC had also said appropriate legal action would be taken if the A-G was satisfied with the explanation given by the anti-graft body in its investigation papers.

steadyaku47 comment : Whatever the charges against Lim Guan Eng...whether they are outright lies, trumped up charges, or genuine...you can be assured that the powers that be.....namely this corrupt BN government ... have enough in their hands to put Lim Guan Eng away for a while...as they did with Anwar Ibrahim.

This is the reality of the times that we are now living in.

If Najib wants to put anyone away...Mahathir included....he can do so because all that he needs to make anything happen to Lim Guan Eng and anyone else, is within his capacity and ability to manage to the conclusion that he wants.

What is Lim Kit Siang, to do?

What is DAP to do?

What ever that we do we must not forget our matalamat! We must win government at the next general election. Kit Siang is wise enough to do the needful....let us take our cue from him. Cina, Melayu and India...and everyone else on our side....listen to what the old man has to say and follow his orders to the letter. His loss is more than ours...that is his son that they have taken away....but he has gone through enough in his life to know what is the right thing to do. Lawan mesti Lawan.
Guan Eng arrested for corruption, says Kit Siang By Audrey Dermawan - 29 June 2016 @ 6:20 PM Facebook 24 Twitter Share 24 GEORGE TOWN: A warrant of arrest against Penang Chief Minister Lim Guan Eng has been issued. This was the claim made by Penang exco member Dr Afif Bahardin via Twitter. The exco member is believed to be in the chief minister’s office in Komtar. Also inside is Lim's lawyer RSN Rayer, who arrived at Komtar at 5.40pm. Moments ago, several men, believed to be Malaysian Anti-Corruption Commission (MACC) officers, were spotted entering the chief minister’s office at level 28 in Komtar.