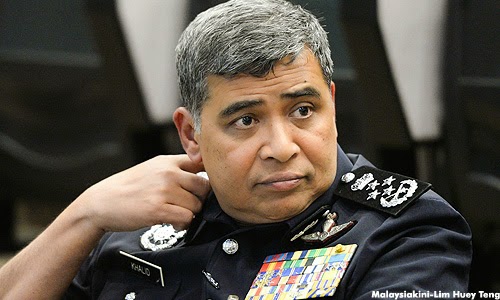 In this bastard of an IGP, Khalid Abu Bakar, we can see what PDRM has become to their political masters.

The Malays have a term for people like Khalid : "hamba suruhan".

Some would insist that  "coolie suruhan" would be more appropriate but that infers that this IGP is "an unskilled native labourer from India or China or other Asian countries". That would be offensive to Khalid because by no account is he unskilled. He is infinitely skilled in the art of licking the boots of his political masters and other parts of his political master's anatomy - specifically where the sun does not shine!

Like all "hamba suruhan" Khalid does Najib's menial task not in the field of crime and security for which he has been employed to do, but in politics. To be more exact Khalid does for Najib in politics what the dog catcher does to stray dogs he finds roaming the streets. In some countries stray dogs are shot on sight and in others they are humanly caught and treated in a humane way and allowed a new lease to a better life. In Malaysia political dissenters are culled.

In Malaysia Khalid does what he is instructed to do by his political masters - be it physically culling peaceful demonstrators by letting his Riot Squad beat them senseless:


or, as we have seen this week, arrest MP's. 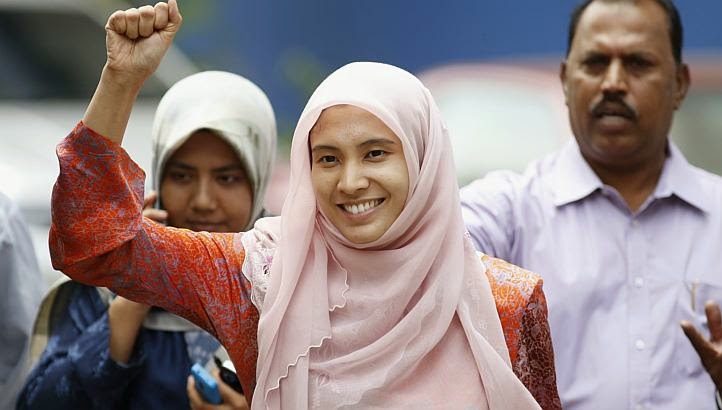 Without shame, without dissent and without questioning the right or wrong of what it is that he has been asked to do, this IGP demonstrates that he has no self respect for himself by giving unquestioning obedience to his political masters as you would expect any dog to give to its master upon whom the dog depends for it's daily  sustenance. Khalid is such a dog to his political masters.

We all know that crime and security is Khalid and PDRM's beat - not politics. But Khalid does not!

When what is being said in parliament becomes the concern of PDRM then I have grave concern for the health of democracy in our nation.

When PDRM goes for opposition MP's and anyone else who expose corruption, dishonesty, waste, incompetence and misbehaviour by public officials and by those in the Judiciary and the government, then all of us have just cause to worry for we are being prevented from holding OUR government to account for its abuse and misuse of political power.

By what Khalid and his goons have been doing  - and there are many of his goons in PDRM - there are  serious doubt that PDRM itself can be resilient to corruption and misconduct.


What Khalid and PDRM are now doing interferes with the ability of our people to hold a corrupt government to account for its abuse and misuse of political power. He and the PDRM he leads is complicit and are in cahoots with this corrupt BN government in dismissing the democratic process our nation profess to practice for personal gain and political expediency.

Serious misconduct and corruption in PDRM is a recent phenomena that dates back less than two decades ago.  Since then PDRM's responsibilities for preventing and detecting  crime, preserving peace and safety for our people, enforcing and upholding the law in a manner which has regard to the public good and rights of the individuals have all taken a back seat to what PDRM and its highest ranking officer, the IGP are now best known to be doing - being corrupt and being "Hamba Suruhan" of a corrupt and arrogant Umno led BN government.

Towards these insidious ends, these "hamba suruhan" of BN have abused their authority, broken the laws that they have sworn to uphold and breach the trust our society have placed upon them since Merdeka.

PDRM have been provided with significant powers, authorized to carry and use weapons and can lawfully detain and imprison a person. All this they have used against our Rakyat to profit themselves and their political masters with no regard to the welfare or rights of those that they remand, question and interrogate, arrest and incarcerated to achieve these ends.
When police abuse their authority or break the law then they breach the trust of our society - and this PDRM has done time and time again.

And by his deeds and acts,  this Khalid has excelled in the task his political masters have instructed for him to do as their  "hamba suruhan" - primarily to cull all political dissent that threatens to expose the corruption and abuse of political power by this Umno led BN government.
His kind shames many decent, honest and hard working officers within PDRM who do an honest day work for the wages that they earn.
His kind brings the force into disrepute.
His kind tarnish the respect and reverence Malaysian had for the post of IGP that Tun Haniff had once served with grace and authority.
His kind deserves to serve a Prime Minister like Najib  - another "hamba suruhan" beholden to Rosmah.
PDRM has got work to do if it wants to regain the trust and respect of the people they serve. There are many many good people still serving in PDRM today and they like us are deeply shamed and sadden by this Khalid.  But as always it is the rotten few that spoils it all for everyone else. God help PDRM.

steadyaku47 comment: Here is another broadside from abang KC.

Adek Hussein,salaam as I address you as such coz am elder than you,this pariah attack mongrel bitch of IGP/PDRM is a complete failure and huge incompetent serving as you say his political masters,without doubt the WORST Chief cop of the nation as far as law enforcement is concerned.On his watch the negatives outweigh the positives thus we have deaths in custody due to brutality by cops/thugs,high crime stats,corruption at its highest,poor standard of professionalism in law enforcement,unqualified officers due to poor quality of training,biased incarcerations,low attitudes of officers similar to thugs/criminals,etc and the list goes on,yet this Goblok top cop has got his priorities in his fundamental butt hole,guess herein we have a legalised gang of thugs to enforce the law according to their whims and fancy,money talks and bullshit walks as they say here in Oz!....take care Bro'﻿