I am not a student of History neither do I dabble in politics. Never have I held high public office or been an activist of any note, of any NGO or of any causes that could embellished my woefully inadequate CV even if it meant my life depended on it. What I do is to observe what is happening around me and then usually in the quiet hours past midnight or just before dawn breaks, I try to put into words my thoughts on what I see, how I see it and what I make of it.

This is what most of us do. We observe, we think and then when we are amongst friends and peers we discuss, deliberate, debate and try to make some sense of all these things that we know is part of life - our life. Some of you surf the net, peruse blogs and FB pages and try to find others who have been able to put into words what is in your head. When you find someone that does do that you are comforted that there are others who think as you do and your thoughts now have substance, have form, have life.

Many many Malaysian are doing this now.

This morning I was awake at 5 and started "work" on my blog.

I was fired up from last night about the arrest of Nurrul. Nurrul is an adult and she can take care of herself but thinking of how her children would be affected by her detention broke my heart - and those images of her saying goodbye to them did not help! 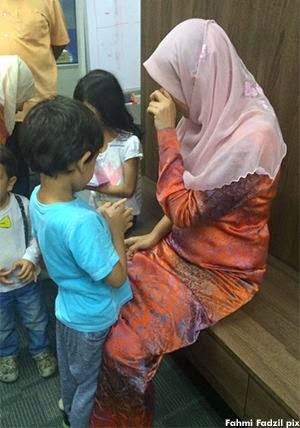 And then I came across this comment from Stephen Tan on Antares FB:

And it moved me enough to post that comment on my blog and as a courtesy to Antares and Stephen I left a link on Antares's FB to inform them of what I did. A few minutes later Stephen Tan got in touch with me and this is our "conversation":

Maaf.... but I do not know who Stephen Tan is. This is the first time we have "talked" but you can see from the flow of our conversation what made it easy for both of us to connect : Our mutual disgust in the manner this Umno led BN government is conducting itself!

Another thing that I noted was that Stephen in 2007 at the age of 57 went to "Putrajaya to take part in the Lawyers Walk for Justice during Pak Lah's time. The guns were trained at us. So were the tear gas".

I do not know what others are doing but from 5,30 am this morning until now - I have been "working" on the same thing! How to rid our nation of these insidious, corrupt and arrogant BN politicians - and so I write.

My own effort may not count for much but there is also Stephen Tan, Antares, Balwant Singh, Tan Eng Swee, Samugan Kandasamy, Katie Loke, Jennifer Cross, Zulqurnain Othman, SuperSnake Cobra, Ambok Chening Meri, Hon Chong Nyok, Panca Sila, Beh KL, Snow Summer, Duke Cheng, Tan Soo Beng, Ranendra Bhattacharyya, Jaafar Ismail, Robert Lai, Denzel Koh, Azman Shaari...just to name a few....all of them from to time have told me that they too are disgusted with the state our nation is in today!

I am one but with all of you we are many!

So please brothers and sisters...do not falter, do not allow each other to forget that we are many...they are few. If two oldies - Stephen Tan who is 65 and me at 67  - can "talk" about this at 6 this morning then what will you do?

“I have walked that long road to freedom. I have tried not to falter; I have made missteps along the way. But I have discovered the secret that after climbing a great hill, one only finds that there are many more hills to climb. I have taken a moment here to rest, to steal a view of the glorious vista that surrounds me, to look back on the distance I have come. But I can only rest for a moment, for with freedom come responsibilities, and I dare not linger, for my long walk is not ended.” Mandela