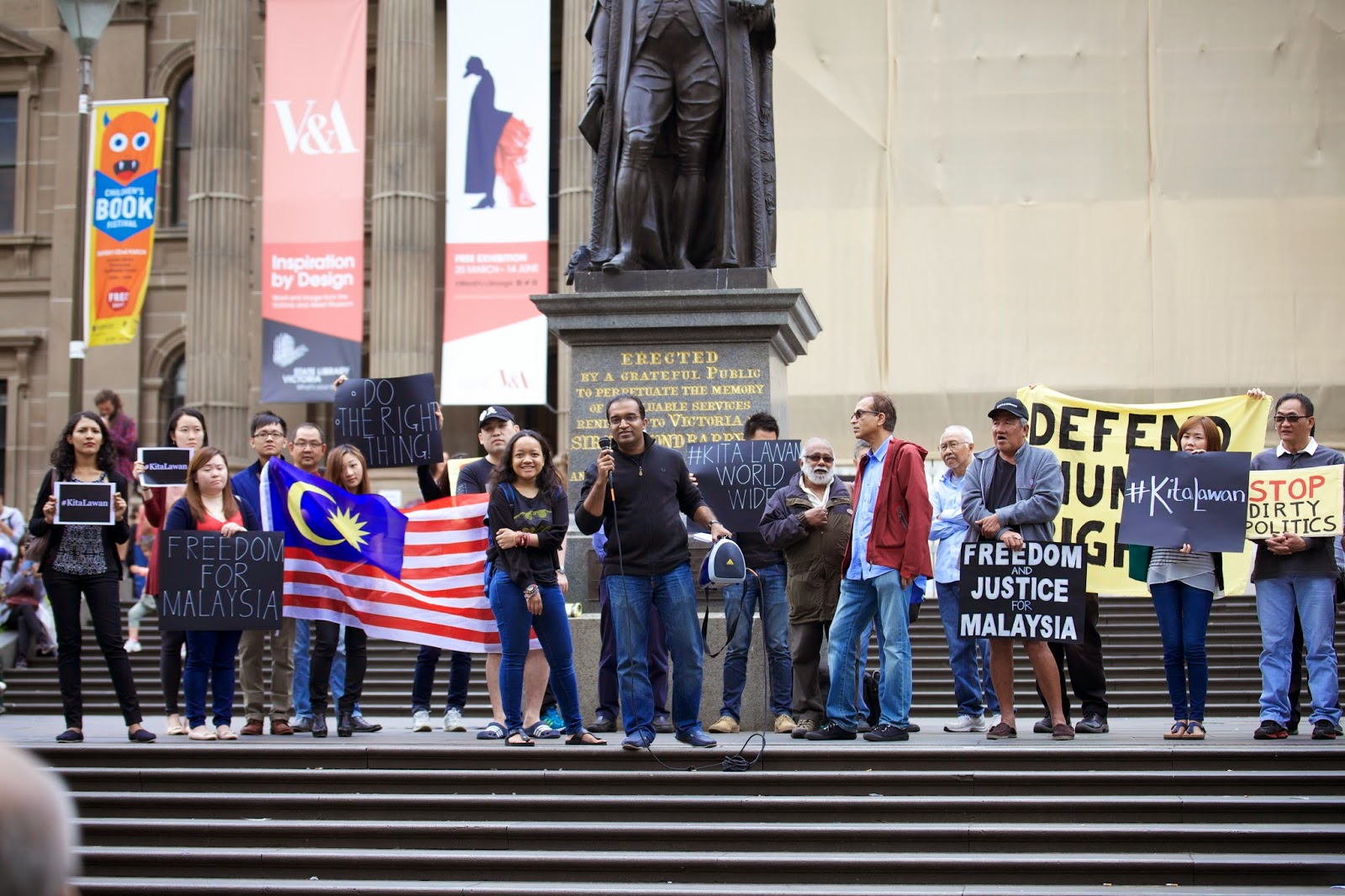 For an event that was organized in three days the "Kita Lawan Melbourne" rally was A Okay! Kudos to Praveen and his Saya Anak Bangsa Malaysia team! The emphasis for SABM has always been on Freedom and Justice in Malaysia. There is not enough Freedom and there is too much Injustice....oh Ya ALLAH...much too much Injustice!

I made a point to be there together with my dear wife, my son Zack and Shazrina from Bangsar who was here with us for a holiday. By the time I got a parking space close enough so that my wife need not have to walk too far, the rally had just started. I walked up the stairs to join the group on the steps of the Melbourne State Library for I was not about to be a spectator to the event. I wanted to be part of it 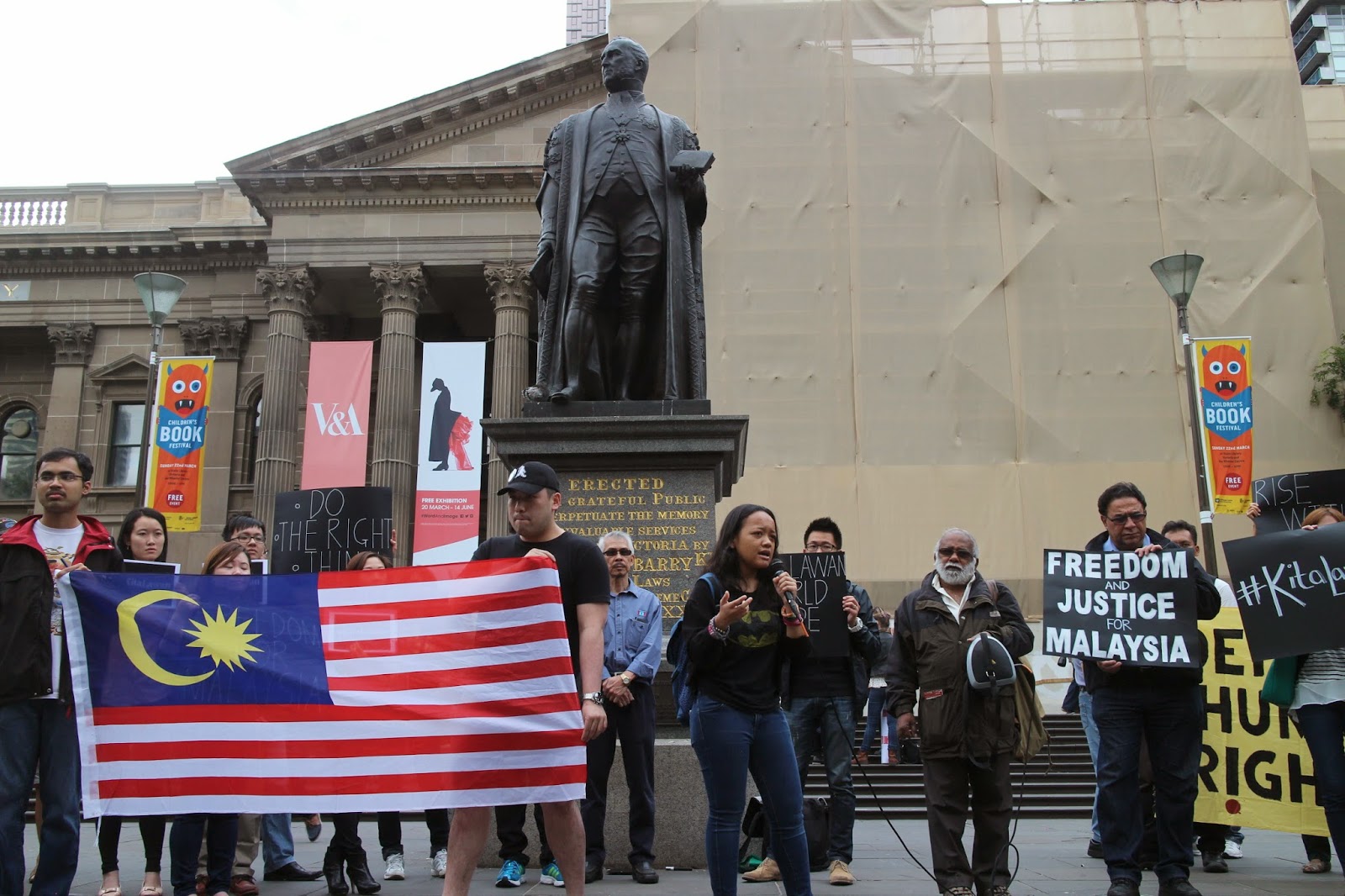 Over 6000 KM away from Malaysia, as the eagle flies, here on a cool Saturday afternoon in Melbourne we were gathered to tell everyone who listened and cared for our country that Freedom and Justice in Malaysia was not only being threatened by this Umno led BN government - but more worrying - the threat to Freedom and Justice in our Malaysia is now  endemic!

endemic : natural to or characteristic of what an Umno led BN government do and has been doing to the people of Malaysia!

This Umno led government sees as it's mission in government to stifle freedom and eliminate dissent to a corrupt and arrogant BN regime. Injustice has been also the lot of Malaysian as this BN government tinker and "guide" our courts and our Judges towards their brand of INJUSTICE. This was what this rally was all about.

I saw and greeted many old Malaysian faces around me. At one moment there were three of us standing together - one Cina, one Bai me the Melayu - each of us having stayed in Oz for over 30 years - almost a century of living in Australia - and all three of us still passionately caring about the state of affairs "back home." What would all three of us have been doing if we had all stayed in Malaysia instead of migrating to Oz...I wonder!

We reminisce about food, life and what the future could have been for Malaysia  - yes I am afraid in that order of importance because when Malaysian get together invariably food comes before politics!

If, we asked ourselves, if India could be one of the preferred country for outsourcing of jobs and call centers despite its thick accent of spoken English, think what Malaysia could have been if English continued to be given the opportunity to develop side by side with Bahasa amongst all Malaysians? Think of all the jobs that could have been created for our people. Think of all the business opportunities that could have come Malaysia's way!

Robert was telling me that the Surgeon who operated on his heart when he had a problem with it was from Malaysia - and she told him that she will not go back to Malaysia.  Malaysia's loss is Australia's gain.

We listened to a number of speakers giving their thoughts on the situation back home. Of course Anwar Ibrahim was mentioned in the context of the injustice that was accorded to him  during his long and varied political life but it was made clear that the rally was not about Anwar Ibrahim - it was about Freedom and Justice. 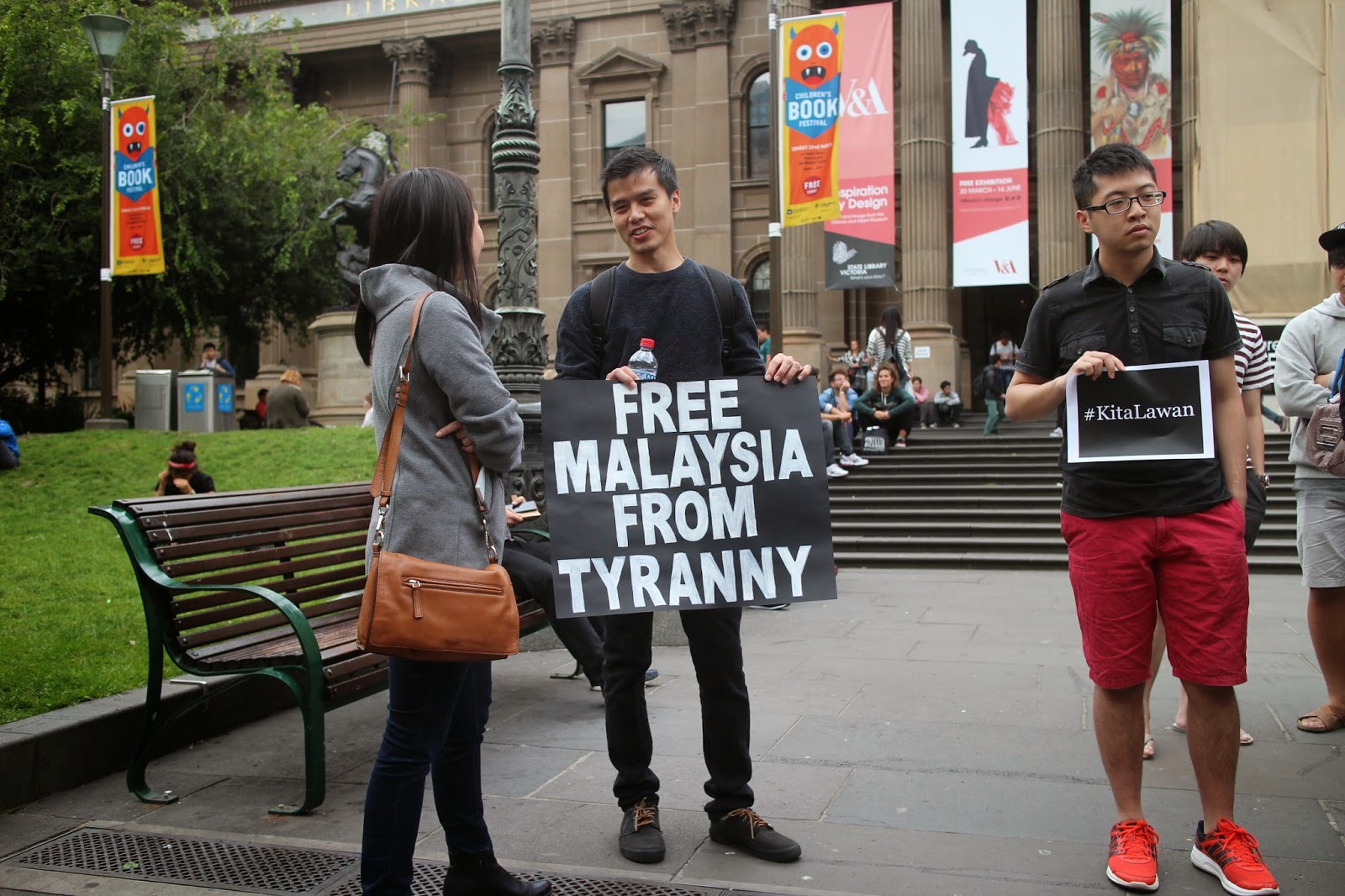 There were many young Malaysians about. If truth be told they outnumbered us old guys by more that two to one - but we oldies were definitely more distinguish looking  - though in their defense it is hard to be distinguish looking when you are in your teens years without a head of white hair that was thinning at the top.

But they were there and their interest tells us that they too cared about Freedom and Justice in Malaysia and in these young Malaysians is the start of the "dissent" against anyone that tries to prevent the people of Malaysia from getting their Freedom and Justice. And lest they think themselves exempted, anyone means anyone - including the opposition!

And this is where dissent starts - from and amongst the young.

If Praveen and his Saya Anak Bangsa Malaysia team were trying to awaken "responsible" dissent from Malaysians in Melbourne, then there is no better way that this SABM Rally for Freedom and Justice for Malaysians.

The young Malaysians turned up in numbers to hear what the older Malaysian had to say about the goings on in the BN government and those who spoke did tell them in a calm and measured tone that all is not well with our Malaysia...and why all was not well. 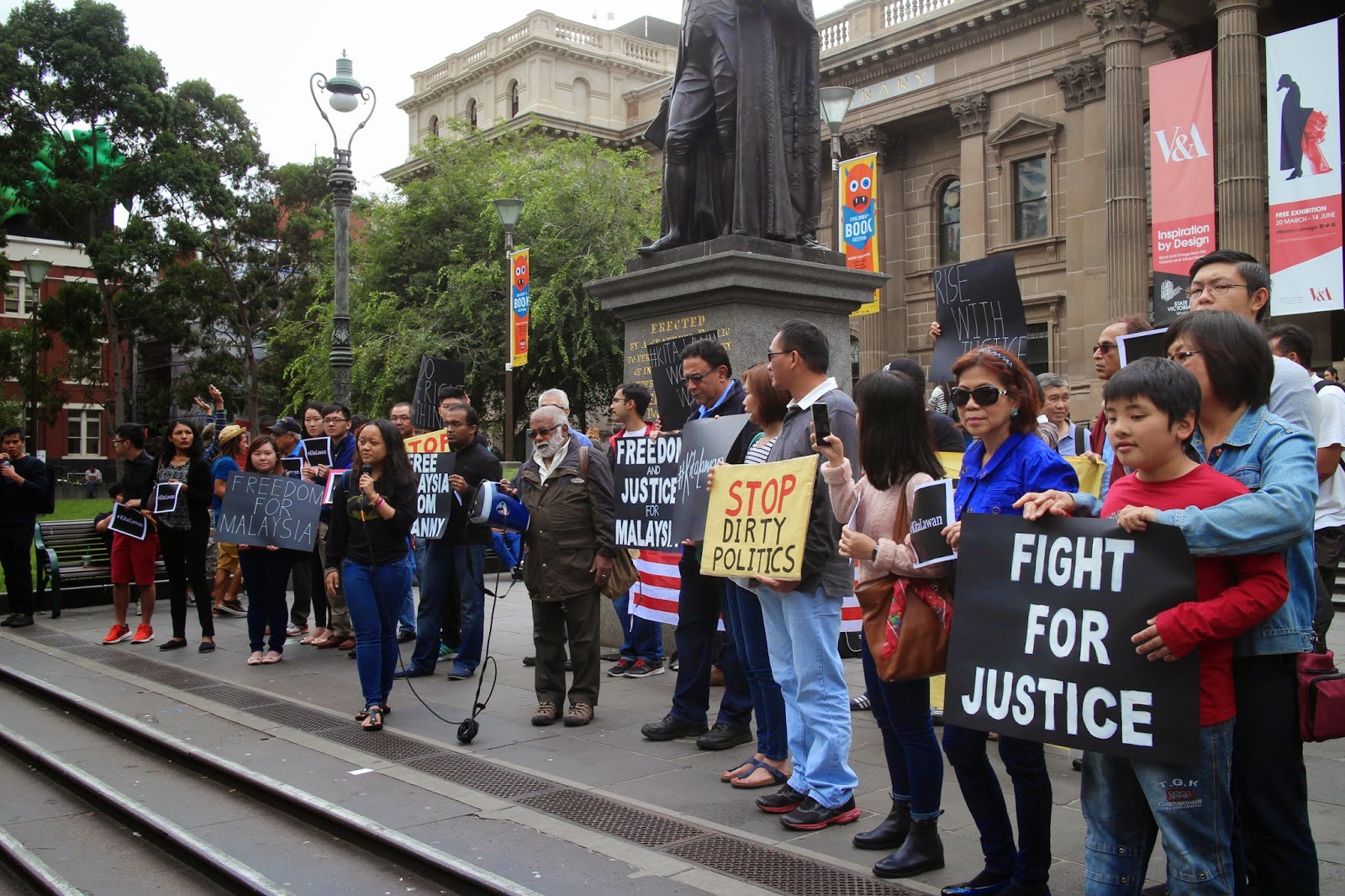 For the first time in my life and to the amusement of my wife, I joined in the chorus of rallying cries to get the audience fired up about the fight for Freedom and Justice in Malaysia.

I was proud to stand on the stairs of the Melbourne State Library with Praveen and his SABM boys to tell those in the audience and anyone else listening, that Malaysians in Melbourne do care about the erosion of Freedom and Justice in Malaysia perpetrated by the Umno led BN government. We will do what we can to bring the attention of others towards the manner this Umno led BN government has been preventing the people of Malaysia from enjoying the Freedom and Justice as promised to them under article 10 of our  Constitution: