Friday early morning and Winter is really over! It will be over 30 degrees today and rising. I am back to wearing shorts and singlet again around the house and even when going to the local supermarket....and enjoying again the freedom of being able to walk around just decently clothed - a welcome change from the layers of clothing necessary to keep yourself warm when in Winter. The nights are still cool but that makes for easier sleep!

At last we have a time frame for moving into the upstairs apartment - by the end of October. There was some worry about some dampness hanging around the apartment but that has already been rectified and what is left is just to process the paperwork - and we hope all will be over and done with by next week  - and then we start the actual physical process of moving from the 4th floor to the 7th floor. Apart from having a shower unit in the bathroom for the convenience of my wife, the view from the 7th floor over the Fitzroy landscape is refreshing. On the 4th floor our windows and balcony are facing other apartments that towers over ours that requires us to keep the curtains drawn for privacy. The 7th Floor apartment faces the sky and nothing else but a view of Fitzroy. How good is that!

In the time since I last wrote about my wife - less than three weeks ago - walking has become almost impossible for her. When she is able to stand up with our assist, her knees would start to buckle and her whole body tremble with the physical effort of trying to hold herself up. So now we have a wheelchair for her use and with that wheelchair we have once been able to take walks around the neighborhood and go grocery shopping together again. Small pleasures that makes the drudgery of life more pleasant.

Last week, for the first time in my life, I had a hernia!

And the immediate pain made be double over! Too much physical lifting to move my wife here and there must have caused it. I could physically feel something protruding through the wall of my stomach. I have been doing a lot of lying and sitting down these last few days and today, for the first time in days, I feel well again. The pain and swelling is gone and all is back to normal again -at least for me!

Everything else in KL seems to move towards "breaking point!".

Things cannot remain as there are now. The momentum for change has moved up to the point that Najib can no longer studiously ignore. When the Conference of Rulers issues a comment on the problems that now ails our nation surely the "tipping point" has been reached? Has it not?

The only other "authoritative" voice within Umno that is still missing is Pak Lah's....but then I guess with KJ still in the cabinet Pak Lah is playing the  "better be safe than sorry" mode so that his son in law still has a job but I am sure KJ has enough wealth stashed away somewhere to be able to put principles before politics! Still you do not really know with these people...money without political power is not that much fun for them!

Enough of politics for now. It tires me out and takes too much out of me to try and second guess what these idiots will do next! I have become so tired lately with their antics that I seem to have lost some momentum in my "need to write"....and always, when I do, I get a few thousand clicks less on my blog on every day that I chose not to write anything new! Such is life.

It is almost 8 am now - 7.49 am to be exact. I will take my leave from writing this for now. all things considered...life is still good.

One last thing...a cousin of mine sent me a blast from the past yesterday - a picture of my wife and our daughter taken over three decades ago...and I would like to share it with you guys here. That is Lucy on the extreme left and our daughter Terrina is sitting on the lap of her cousin. Salam... 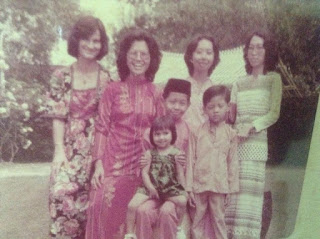