If we all already laughing at Najib Razak....what do you think those around him do? 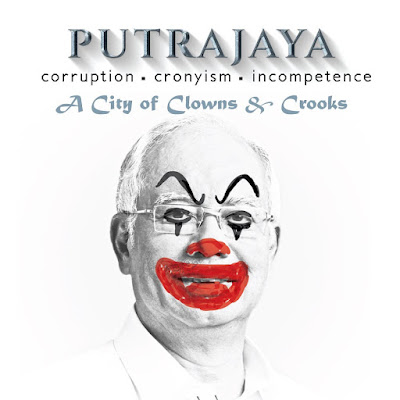 We humans are at our weakest when we are blind to what is around us and will look only to our own needs, our own wants, our own greed and to our own salvation. In doing so, we become blind to the needs and wants of those around us. Each of us have been guilty of these failings in various degrees but our failings have been played out, more often then not, in the privacy of our own private world....but for Najib and Rosmah, their fall from grace will be witnessed by all of us.
Marcos, Suharto, Gaddafi, Saddam. Mubarak and now Najib. History is littered with the fall from grace and political power of all those who have failed the very people who have given them that political power. This truth is relentless.
Now what of Najib as a leader?
This man a leader? Huh! Do you ever think about Najib Razak without thinking about Rosmah? Yes we joke about who is prime minister in Seri Perdana... Joke about her attending and calling for cabinet meetings ...about her jetting here and there on "urusan kerajaan"...about Najib hiding behind her skirt...about Najib being "queen control"...but, jokes aside, how much of that are jokes and how much of that is reality?
If we all already laughing at Najib Razak....what do you think those around him do? Does not his cabinet ministers laugh at Najib as we do? At the antics of a wife who knows her husband place because she is the one who puts him there? Do they not laugh when they see Najib and Rosmah trying to be "presidential" in China and instead end up making fools of themselves? Do they not laugh when they see Najib singing like an idiot and making a fool of himself with Duterte? Do you think this is their leader? Certainly not!
No Najib is not their leader...they see Najib as we see Najib....a bumbling, queen control coward who is, for now, their periok nasi....the provider of dedak!
We are fascinated by the last hours of a man condemned to be executed for a crime....we want to know what he wanted as his last meal....how did he spend his last day on death row....how did he behave in his last few hours before his execution....and what were his last words.....but all this is played out in the confines of a prison far far away from our prying eyes.
But for Najib and Rosmah, things will be different. We are all lining up to get the best seat in the house to see the imminent political demise of Najib Razak ! For this I cannot wait...but I must until GE14. Until then, these two will the the bahan for countless jokes, source of laughter and mirth for all of us....and let us say Amen to that!
Posted by STEADYAKU47 at Monday, March 26, 2018