PTPTN A DISASTER OF QURANIC PROPORTIONS WAITING TO EXPLODE! POSSIBLE $8-$13 BILLION NPL! PAY UP YOU CHEATS! 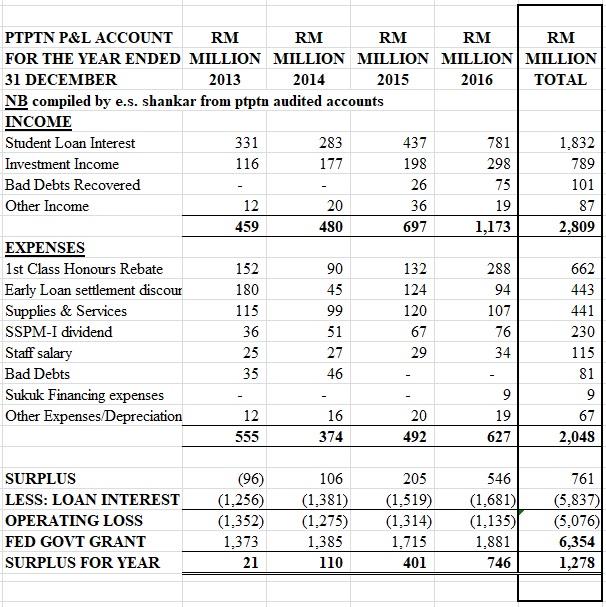 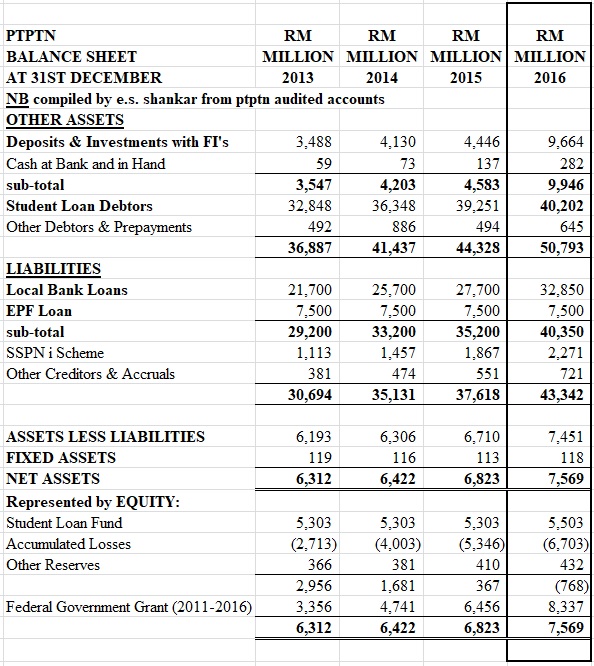 Perbadanan Tabung Pendidikan Tinggi Nasional, PTPTN, or the National Higher Education Fund Corporation, was established in 1997 by the government to enable students to borrow money cheaply to finance their tertiary education, locally.
To put it simply, PTPTN's business model is a recipe for a disaster that has mostly, already happened.
Why and how? Numbers do not lie, they tell us the story.
1. It's obvious that even if PTPTN were to double its annual income to $2 billion, it will still lose money. After expenses, it cannot cover about $1.7 billion annual interest cost on $40.35 billion loans, with interest running @ about 4.2 % p.a.
2. The only reason PTPTN has shown profits is because, between 2011-2016 alone, Najib gave PTPTN $8.3 billion in FREE GRANTS!
3. Without this annual freebie, PTPTN would have gone bust many years ago! So, Taxpayers are well entitled to ask how top management can be held accountable for performance, if Najib and his administration are waiting round the corner with an open cheque book for any amount to bail them out?
4. NON-PERFORMING LOANS (NPL) AS HIGH AS $13 BILLION?
EPF and bank loans total $40.35 billion against Student Loan Debtors of $40.2 billion. However, this is highly misleading, as there seems to be a massive under-provision for NPL bad debts @ $108 million or 0.25% of debtors.
PTPTN has admitted that it was due to collect $18.81 billion between 1997-2016, but actually collected only $10.72 billion, a shortfall of $8 billion. It also revealed that some 660,000 borrowers had not repaid a single cent! CLICK HERE.
Between diploma and degree holders, the average loan per student outstanding, as shown in the accounts, is about $20,000. Using these figures, the NPL could be:
660,000 x 20,000 = $13.2 billion! So, the disclosure that $8 billion makes up arrears overdue by more than 1 year, needs explanation from PTPTN.

5. In his 2018 budget, Najib has agreed that the Federal Govt, i.e. YOU AND ME, THE TAXPAYER, will generously absorb hundreds of millions of ringgit that PTPTN has been writing off each for loans given to first class degree graduates, as well as discounts for early loan settlements. In 2016, this amounted to $288 million and $94 million respectively. Between 2013-2016 the total figures are $662 million and $443 million! How generous of Najib to put us all in more debt!

a. In 2016, it borrowed an additional $5.15 billion in Islamic sukuk funding from local banks. Does it expect to increase its other income by funding it with 100% borrowed money? PTPTN paid $9 million in fees for this sukuk funds.
b. It made additional payments of $406,549 and $513,554 to "important employees", averaging more than $40,000 per person. No details are available as to the exact nature of these payments, why these 11 persons deserved it and if it was over and above their annual bonus. This is a disease that seems to afflict many a GLC and govt corporation under Najib. Regardless of the financial position or performance fiasco at that entity (e.g. FGVH), top management can get away with paying themselves huge salaries, bonuses and perks!

d. Other than one Chinese, the rest of 25 persons comprising Chairman, CEO, Board members and top management pictured in the 2016 report, some of  whom are government-appointed (including Attorney General Apandi Ali), are ALL Malay/Bumi. Why is this so?

7. So, is there a solution to this nightmare? I did not cause the problem. But, here's my thinking:

a. Firstly, after 20 years, PTPTN must bite the bullet and write off all bad debts. Much of it might be due to deaths, emigration or poor documentation and record keeping. This basically means that somewhere between $8-$13 billion, or up to about 33%, MAY NEVER BE COLLECTED. What in reality is the worst case scenario?

b. Next, all the Bank Loans should be re-negotiated and lending banks forced to take a big haircut. Let them take a hit as part of national service, like WE THE TAXPAYERS.

c. Stop all waivers for first class graduates and early settlement discounts. The interest charge is low. If you don't believe it, try borrowing on commercial terms from banks. The government must make available funds for PTPTN at the same rock-bottom cost of funds as for Bank Negara/MoF/Treasury.

d. PTPTN and the govt must go all out on a debt-recovery blitz. Goddammit, just publish the full defaulters list at its website, in all the newspapers, air the names of  the most recalcitrant borrowers on TV and Radio and take legal action without guilt.

Basically, all these irresponsible borrowers want two bites of the cherry. They got a PTPTN loan which is already funded with Taxpayers money and subsidised low interest, enabling them to get a degree and a higher paying job. Now, when it comes to repayment of that loan, they are asking the Taxpayer to subsidise their loans again with discounts, rebates and waivers! Have you no shame? You borrowed, you pay! It's a struggle? Yes! But, it was not any better for the older generation either. Many of us got nothing from our government, not 1 cent. We too struggled and slaved and stinged and cut corners so that the next generation could get a head start and good benefits. You have a right to higher education, but not the right to pass the burden of your cheap loan to others.

e. The PTPTN Top management and downline staffing should be re-structured to employ more proven professionals and be more inclusive.

f. Our education system should be revamped, like yesterday. Right now, many are pursuing degrees with no proper grades or interest, resulting in them not being able to find relevant well-paying jobs. Bring back vocational schools, so that there will be an additional avenue for young people to acquire practical skills which will allow them to earn decent, living wages.

8. Only then will we have a true and clear picture of the Taxpayer bailout that is required. Let not Najib pretend that it's a government or UMNO bail out. Whichever way one looks at it, it's the Taxpayer who is going to be walloped.

9. Where to find the money? Easy:
a. Cut the Minister of Education's salary for goofing and the MoE budget for wastage. The Minister and his top executives at the Ministry must be whacked for the PTPTN mess.
b. Cut Najib's PMO over-bloated $17 billion budget by at least $10 billion.
c. Abolish the Federal JAKIM and save $1 billion a year, as religion is a State matter.
d. Stop ALL scholarships to Pakistan, Indonesia and the Middle East countries, especially for religious studies. If I am going to subsidise some unknown's education in the national interest, and I am not totally against it, it will not be to countries where our youth get brainwashed to become ISIS and/or Taliban extremists with bomb-making expertise.

Email ThisBlogThis!Share to TwitterShare to FacebookShare to Pinterest
Labels: donplaypuks