This happened at SMK Seri Selayang 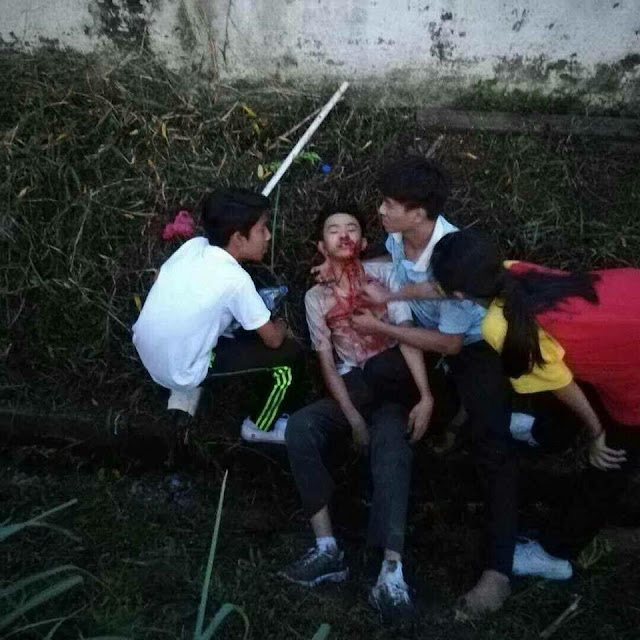 The incident occurred when a group of Malays in this school robbed the Chinese student's mobile phone. After the Malays robbed the Chinese student's phone, they ran to the grass field opposite the school. The Chinese student called his brother to come and he also went to school to tell the teacher that the phone had been snatched away by the Malay students. He thought that the teacher would help retrieve the phone and he didn't expect the teacher to tell him "Things other than school are not related to school!" The student disappointed, walked away and waited for the arrival of his brother. When the brother arrived, he called the phone, the Malays answered the call. Suddenly a large group of Malays, including Malay students, used weapons to encircle the brothers!
Now the chinese student is in the ICU, the parents of the student have already reported to the police. I am afraid that the police will have a hasty thing. So I would like you to help share the photos. Let everyone know the case of school violence! It is simply human anger! Was it necessary for a teenager to hit this?

When the Parliamentary guardians of law are the law breakers - the children will break the law.
When prosecutors are prosecuting and jailing the innocent while allowing the guilty unfettered freedom- the children will be cruel predators
When the nefarious law keepers are engaged in all manner of criminal activity for ill gotten gains- the children will seek to posses what is not theirs through any means.
The report itself is painful to read, as it presents it to be communal or racial criminality.
The first act and original root of criminality is the enforced constitutional, legal definable separation of race,
The second act is the decimation and desecration of equality


The third is the defilement of law in attaching and using the above two as a pillar on how justice is disproportionately dispensed.
How I wish the report was ‘ A group of unruly students attacked a schoolmate over a phone...........
Such tragedy and trauma will be ever present until we politically, personally, emotionally, spiritually, legally and constitutionally dismantle the negatives of race and religion from the national psyche that has been used in a detrimental manner.

posted as forwarded to me.

Email ThisBlogThis!Share to TwitterShare to FacebookShare to Pinterest
Labels: This happened at SMK Seri Selayang