Not China, not PAS, not Umno not BN.....always Pakatan Harapan!

Today, what the Communist could not then achieve by the armed struggle of the Malayan Communist Party (MCP), they have begun to do again by tact, diplomacy and economic infiltration into Malaysia.

Beijing's "One Belt One Road" initiative will see a deep-sea port as part of the Melaka Gateway project built for strategic rather than commercial reasons.

The Melaka's Chief Minister tells us that historic legacy is one of the reasons for Beijing interest in Melaka. Really? if so, then did not what the MCP did during those Emergency years be enough of a legacy to the BN Malaysian government to NOT go to bed with those who have cause many thousand of Malaysians to be sacrificed in the fight to prevent the  Communist from taking from us our own country that the wanted to make theirs? The ability of politicians to make light of the sacrifices of thousand of Malaysian that came before them in order to conveniently suit present political needs sickens me to the core of my being. Ptui!

Port Klang has plan for a RM$200 billion expansion and then there is the RM$12.5 billion Kuala Linggi International Port near Melaka.... all funded by "investors" from China. 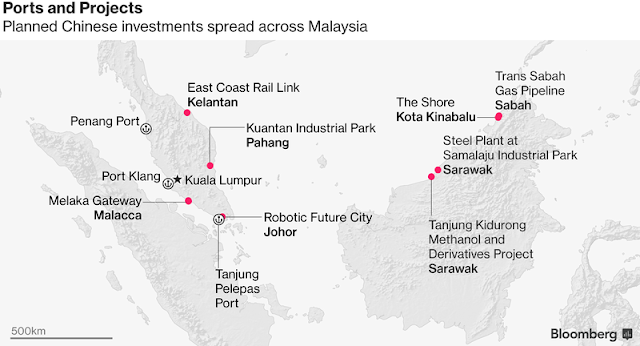 All this and more are planned in Pahang and Kelanatn. In Penang the Chinese are ostensibly using their money to finance development there. Really? Does the phrase economic domination rings any bells in your head?

And then of course there is the University....China's "soft approach" to have their way into Malaysia through education! Do we not remember how Umno used education to dumb down  our young and by so doing have easy passage to rape and pillage our country to their hearts content?

Of course you can trivialise all these rantings of mine as being that of a Malay who is paranoid that the coming of China to Malaysia spells the end of the Malays and Islam. Am I not trumpeting the very thing that umno has been telling us Malays? That the DAP will be the death of the Malays and of Islam? And is not DAP and China of the same mettle...the same race...the same people?

No my dear friends my rantings speaks of greater ideals, greater aspirations, greater needs...and all of them are for my country. And if you call yourself a Malaysian, you too should be alarmed at what is now happening to our country as China begins it's march across the length and breadth, North to South, West to East of  our beloved Malaysia...a Malaysia  already on the verge of economic ruination, endemic racial discord with leaders sans any grace, accountability or responsibility in the things they do to our country in the name of government. That, and nothing else, is my concern.

The Soldiers that fought against the Communist during the Emergency might feel betrayed. The Malays might not want anymore Chinese in their backyard. The Chinese might welcome the intervention of Big Brother from the mainland to protect their interest in Malaysia...to each their own agenda....my only concern is the dignity and the sovereignty of this country that I love. Economic domination by any country of our country, China included, will take away from us all, self respect and the sovereignty of this once great nation of ours.

That, and that only, is why our soldiers sacrificed their lives during the Emergency fighting the Communist. That and that alone should now be our consideration if we want this odious and corrupt umno led BN government to cease and desist from continuing to surrender our sovereignty to the Chinese simply for the purpose of their own personal vested interests. And what may these vested interest be? in a word...DEDAK. the ravages of DEDAK to our economy has made it necessary for this Idiot to surrender our sovereignty to China - nothing more, nothing else. It has been DEDAK  nothing else but DEDAK that has cause our country to now allow itself to be willingly ravaged and raped by a China  intent upon one thing and one thing only - to serve it's aggressive stated policy of economic domination of any country that allows it to do just that. And Malaysia my friends is now one of those countries.

Enough said! I am tired of reminding you all to fight back this despicable umno led BN government that is prepared to do any deeds, make any deals and signed any numbers of MOU's and Agreements with China simply to line their own deep pockets with DEDAK and to get China to make right what has gone wrong in Malaysia because of corruption.

We must say no to China. We must say no to DEDAK. We must say enough of umno and BN. If we do not, our children will not have country to live in, a future to look forward to and all that they can do is to leave this nation of ours as I did, and go try and make a living and a future for themselves abroad. To many millions of Malaysian have already done that. Stop the exodus, stop the rot and certainly stop this Idiot from making it all possible. Vote for Pakatan Harapan!

I do not want the Chinese in my Malaysia for the same reason I do not want PAS and Umno to do government after GE 14...because I want my Malaysia back! And if you are a Malaysian at heart, in deeds and in everything else...you too would want the same thing that I want...for are we all not Malaysians?