Without Doubt...the Young Must Lead! 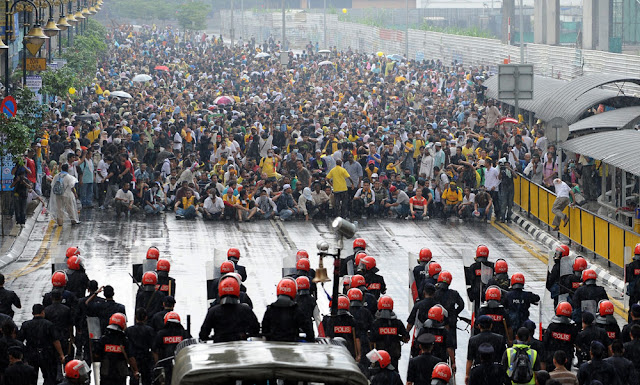 cakap cakap : 7.06 am.. Saturday. Melbourne: The weather here is between Summer and Winter... sunny at times, rain and windy the next. And me in my sarong, T shirt and slippers trying to keep as warm as I can ..otherwise all is good.
As I have said earlier, Pakatan Harapan seems to be peaking at just about the right time - whether planned or not, it does not matter though I am sure the passing of Tan Sri Sanusi Junid is bound to push some of them over the edge towards reason, rationality and logic. The stars are aligned and the orchestra are tuning up ready for the concert to start...and doing the conducting are those two oldies but goodies...Kit Siang and Tun....with a ensemble of troops all ready to go. We...you and me...are by default, part of the troops ready and willing to do as needed.
People's Power will decide who will do government after GE14. GE14 is too close to call even with the chicanery employed by this dastardly umno led BN regime. They say that even with 40% of the votes, BN can still hold on to government. So deny them even that 40 %!!!! Ensure that the margin favouring PH is decisive that nothing that BN do, can win them an election they have already lost.
You must remember that nothing has yet been lost by PH.
Even if they want to stuff the ballot boxes with BN votes...they have not done it yet! Even if they want to manipulate the postal votes to favour BN, they have not done it yet! Even if they have stuffed dedak down the throats of any Malaysian to vote for BN...they have not yet voted for BN. Nothing has been done yet.


What it means if that there is still time for us to work towards NOT making these things happen. There are many ways to ensure that all this does not happen. Invoke and PH will tell you how, but before they can tell you how to do so...YOU MUST WANT TO HELP THEM TO DO SO!!! Volunteer and make a commitment to do the right thing by all of us. Then on election day make sure that there are enough of us to stand by and ensure that no amount of trying will allow BN to cheat, scam or deny us victory in an election we have already won.
For People Power to work...we must have the numbers. Hundreds of thousand...even millions of us must be on the streets with more waiting nearby as reinforcements, if required, to come to the assistance of our brothers and sisters. The police cannot stop us even if they wanted to when our numbers are large enough....and in the rise of Peoples Power, without any doubt, the young must lead. The young people must be in the thick of it all. The young people are needed if we are to take Putrajaya.


The Tentera...what of them? Stories abound about the number of Generals already indebted to Najib for their newly found wealth. How many Generals can Najib buy?
But what are the Generals without their troops? So who cares about a few generals who have become bloated with dedak? It is the soldiers that counts. I dare say that not even one general can be sure of delivering the loyalty of these soldiers to Najib when push comes to shove. Within the Army, loyalty to BN or PH are in the laps of the Gods. No one knows for sure until the call to battle sounds. I for one passionately believe that the soldiers will do the right thing for themselves and for us when the time comes.
All that is left is for Tun and Kit Siang to be in good health to lead us for the last ten yards of the final charge towards Putrajaya. That is just a few weeks away. We are ready for battle, we are ready for the second coming of Merdeka. We are ready to fight back.
Posted by STEADYAKU47 at Saturday, March 31, 2018

Email ThisBlogThis!Share to TwitterShare to FacebookShare to Pinterest
Labels: the young must lead. fight back