I AM WITH ANWAR, KIT SIANG, KARPAL, GUAN ENG, HADI AND TOK GURU! I AM ON THE SIDE OF A RIGHT, DECENT AND RESPONSIBLE GOVERNMENT! SO HELP ME GOD!

Cukup lah! be fair to the Raayats. They had enuf of lies and hypocrisy. All who walk the corridors of power are MUNAFIKS of the highest order lah....they will die with their roh tergantung!!! Oh Tuhan, dengar lah keluhan Raayat Malaysia" !!!!

I read that comment somewhere and I pasted it on my PC to remind me what I should write about this morning. I apologize to the writer of that comment for I have long forgotten where I read it from and cannot credit it to him or her .....but if you read this...many thanks for giving me another reason to write the following:


What do I remember of the last five years since the 12th general election?

The change from Abang Lah to Najib? Obviously!
The inevitable and much awaited political demise of KJ? obviously!
The rise and rise of Mahathir and other political has been's within UMNO? Unfortunately!
Did UMNO failed to clean itself of money politics? Yes UMNO failed!

And of course the rise and rise of Pakatan Rakyat!

Of course there are other things that I remember but esok - Sunday May 5th 2013, it will all be done!

By Monday we will either have Najib still as Prime Minister or Anwar Ibrahim will be putting on his best Malay Dress and Songkok to megadap the Agong for his swearing in as the new Prime Minister of Malaysia.

So it has come to this…..in a matter of days Anwar or Najib will either find themselves experiencing the highs of victory or the lows of the vanquished!

Let me hazard a guess…and educated guess perhaps but nevertheless it will be a guess. Anwar will be Prime Minister!

From the time the battle started in earnest when Najib dissolved Parliament, the tide has been ebbing our way – Pakatan Rakyat’s way.

I am not going to qualify this with a “if Sabah abandons UMNO” or “if Sarawak rejects Taib Mahmud.” nor have I base my 'guess' on the premise that the Chinese will go DAP’s way, the Indians Pakatan Rakyat's way and the Malays will now, throw their lot with PKR and PAS because they now know what dastardly deeds UMNO has done to the Malay race.

None of the above!

When all the variables and game changing tactics and strategies are accounted for, when race, religion and region are also taken into account, what we will have left is really common sense! The ability to rationalize and think for oneself what is really is the right thing to do! Vote BN or PR!

And save for these of unsound mind, those with vested interests, those who, for whatever reasons, are already committed to support one or the other political coalition, I think the people who are left will err on the side of common sense.

And what will common sense tell them to do? What will it tell you to do?

They can see that what BN has done to this once great and decent Nation of ours. Our Malaysia is now polarized by race, religion and region! Kebendaan permeates every aspect of their lives. They know that they are without decent and responsible leaders to lead them into a future they aspire for themselves and their children!

They can hear what most of our people are saying about "UBAH" "enough is enough" and "a new beginning".

They can think and deduce from the madness around them which political coalition is the better one.

Do they give Barisan Nasional another five years after BN has failed for fifty five years?

Or do we give Pakatan Rakyat an opportunity to do to Malaysia what they have done to the four states that got an honorable mention in the Auditor General report?

Rosmah or Azizah? Not a level playing field you say? Why not? Look beyond what they wear, what they use, what they say! Look at what each have done for their family, for their people and for the country. You tell me if it is Azizah or Rosmah?

Najib can lay claim to a stellar family pedigree. – he had nothing to do with it but it is his to lay claim to. A1 plus. Father Prime Minister. Uncle Prime Minister. He has been riding on that pedigree ever since! From getting a free pass to being the youngest MP ever, youngest MB ever and then for most of his political life, Minister of Defense. He served a Prime Minister who preferred flawed Ministers who would unfailing do his bidding. Najib qualified “cum laude”  and so for Najib 'Alea iacta est' (Latin: "The die has been cast") and politics would be his calling. If Najib can be defined by his time in MINDEF then he has no business being our Prime Minister! What has transpired re the Deepak situation is what has happened with MINDEF under Najib and what has happened to our country since he became Prime Minister! He has used his public office to advance his personal interest not ours!

Now Anwar Ibrahim. Anwar is you! Anwar is me! We all go through life the best way we can taking care of family first before we take care of ourselves - and when we can, we help others. Pakatan Rakyat under Anwar wants a better life for our children! There are good times and bad times. Somehow we manage. What matters is that we fight the good fight alone or with good friends. We believe that there is a season for everything….and if you are on the side of right then might will not be able to do you harm – at least not that much harm that you cannot endure. In the end you can only do your best and nothing more. 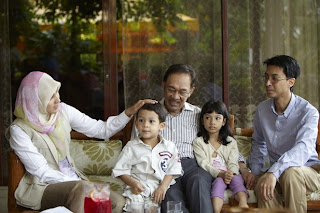 I am with Anwar because he is me and I, him.

What do we want?

A better future for our children. Nothing more and nothing less.

Do not let us down, do not let yourself down and most critical, do not let our children and the future generations down. Do what you must!