Azizah a PR victory at the next general election will see the release of your husband from Sungai Buloh. Surely that is reason enough for reconciliation between you and Azmin?

Contrary to popular belief the incarceration of Anwar Ibrahim does not require for PKR to appoint, elect or nominate another Ketua Umum to take his place. The post of Ketua Umum in PKR does not exists. It was an honorary position given to Anwar Ibrahim. No Anwar Ibrahim, no Ketua Umum!

Azizah the state assembly member for Kajang is president of PKR.

Azmin Ali, the Menteri Besar of Selangor, MP for Gombak and assembly member for Bukit Antarabangsa is Deputy President of PKR.


Sans Anwar Ibrahim, Azizah is the numero uno in PKR and Azmin is numero dos.


The only thing common about those two is that they are members of PKR.


I recall Prince Hamlet's remark of the new King of Denmark, his uncle Claudius - who had secretly poisoned Hamlet's father. Hamlet said this of his uncle - "A little more than kin, and less than kind". Translation for those of you from Umno and BN who are not that bright and still read what I write : The only thing common between Azizah and Azmin is that they are members of PKR. In everything else it is every one for himself/herself.

There are now two camps within PKR.
In a democratic political entity (which PKR of course is!) it does not take a rocket scientist to figure out that elected wins out over nominated.

For sure they do but only at election time!

Long story short : Azmin Ali has grass roots support while Azizah has the support of the top echelon of PKR's who were nominated to their post by Anwar's. They are all Anwar's men.

Business analogy - in any business organization, who has the Board of Directors on side rules the roost - but when contentious issues are put to the vote  it is the shareholder's who will decide.


That was what happened when Anwar wanted Azizah to be MB but PKR's grassroots wanted Azmin. When push comes to shove, Azmin had the numbers to muscle his way to the post. The Sultan, wittingly or otherwise, merely facilitated that democratic process.


Two factions in PKR with no love lost for each other.


They are not friends: 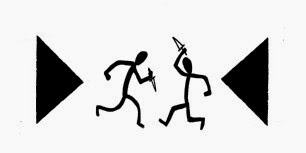 How long will the calm hold?

How long the calm will hold will depend on what is at stake. For now Azizah is secured as PKR's president and Azmin has got his coveted MB's job. The party election is still far away. We know that in politics time is relative to the issue at hand. So given that reality  what is next?


Who will be head of the Pakatan Rakyat's opposition.


From what happened during the tussle for the MB's post, Azizah and Anwar knows that Azmin will defer to them in public (as he should!) but he has emphatically demonstrated that he too has his political agenda. An agenda that is amply backed by the elected representatives of the grass roots in PKR  - the only "backing" that matters in a democratically elected political organization. It was this grass root support that Azmin drew upon when he made his move for the MB's post. So if there is a push for someone from PKR to be leader of  the opposition I have no doubt that Azmin all have the numbers in PKR to be nominated for that post....but Azmin has got enough sense to understand that this is not his time to lead the opposition.

And it would do Anwar and Azizah well for them to accept that so that Pakatan Rakyat can move seamlessly towards the next general election.

As for PKR, if Azizah is to remain President in name and in fact, it would do her well to start developing grass roots support within the party and restructure PKR's top echelon of leaders to reflect those elected by the grassroots rather that those nominated by her husband or herself. If she does not then Azmin will be President of PKR by the next party elections. From there the road to Putrajaya and Seri Perdana is not a matter of "if" but "when".

Azizah make your peace with Azmin. The challenge to win government at the next election is bigger than sustaining a family dynasty, more important than prolonging quarrel, perceived or real, between your faction and Azmin's, and more critical, a PR victory at the next general election will see the release of your husband from Sungai Buloh. Surely that is reason enough for reconciliation between you and Azmin?

Henry Ong gives his insight on the above post. I am not in total agreement with all that he has written here but let us say that we agree to disagree here....but we will hear each other out. Tqs Henry for your comments.

Let me be the first to comment of your writing that Puan Azizah & M.B. Azmin should make peace with each other if  they want to lead Pakatan Rakyat to victory in the next election.  You also wrote that  "for now Lim Kit Siang should have the honour & privilege"  should Pakatan win the next election be the next Prime Minister of Malaysia.

No Malaysian Chinese today should accept the post of Prime Minister, Deputy or Defence Minister. In fact these IMPORTANT POSTS must be held by Malays, Muslims & Orang Asal like Kadazans or Dayaks. There are just too many pitfalls for trying
& doing things too new & radical for Malays to accept today. Malays today for better or worse must be in charge of Malaysia. Most important thing today is a find a core group of young Malays & Orang Asal & non Malays  with fresh ideas to come forward to serve the country. In a country of 25 miilion there must be many young people able to lead the country. I say pay them well so that there will be no other distractions from their duty.

As long as Pakatan do not come out with a Shadow Cabinet list like the British political parties when in OPPOSTION, Pakatan I feel will not win the next election with a good majority. The POPULATION of Malaysia now is 65% Malays, Orang Asal & Muslims & Chinese & non Muslims  35%,  my thoughts after many years of not having a REAL trusting relationship with each  other the 65% will not vote for a Chinese Prime Minister.

Malaysia is not America or Australia, it is a very racial  country today where the Malays will never give up their political dominance because they think it is the end of the Malay race if a Chinese becomes a Prime Minister & their many privileges. Lim Kit Siang should also not harbour the thought that he should be the next P.M. because of seniority if Pakatan wins the next election.

Anyway for me it is a good write, very provocative about Lim Kit Siang being the next P.M. If the Shadow Cabinet shows Lim Kit Siang be the next P.M. of Malaysia,  you can forget Pakatan winning the next election. The Malay people will forget all their fights with each other & the all  will vote for B.N. lead by UMNO.﻿
Show less
Posted by STEADYAKU47 at Saturday, February 14, 2015