steadyaku47 comment: I came across this article (author unknown) in October 2010 and posted it on my blog late Ocotber 2010 because there were truths in what he said. To day almost five years later I came across it again this evening as I looked back to the early years when I first started blogging.

Abang Lah was then Prime MInister.

Today with Najib Razak as Prime Minister nothing much has changed. It is for you to read what the writer thought of Abang Lah and Umno five years ago and ask yourself if the same could be said of Najib and Umno today. An interesting leap back into time.

I am an UMNO member to its core. I used to believe in its fight for Malay supremacy and Malaysia. I respect and am indebted to all its presidents; Onn Jaafar, Tunku Abdul Rahman, Tun Abdul Razak, Tun Hussein Onn and Tun Mahathir Mohamed. This is the party which fought against the Malayan Union, the independence, the development and the glory; right until the time Mahathir handed the power (and the fate of the nation) to Abdullah. BN won with landslide victory in the 11th GE. I had believed that we were in the good hands of Abdullah. But he turns out to be a traitor!

The doom fated UMNO will crash to its knee and the only way to stop the inevitable is to remove Abdullah. I am Malay and accustomed to its ‘sopan-santun’ culture but never have I hated any political leader as I hate him now. Even Karpal and Anwar now look better to me. Khairy and Kamaludin’s involvements and influence in UMNO and federal administration are catalysts to the demise of this great and glorious party. I am ASHAMED even to recognize Abdullah as my Prime Minister (PM). If I have the power I would erase any proof that Abdullah was PM!

Mahathir had once said that his only failure was to change the Malays. He is wrong! Mahathir’s biggest and fatal mistake is the choice of his successor, Abdullah! What has Abdullah done for the past six years? Can anyone answer me? He has done NOTHING but damages. Who the hell is Abdullah to cancel the curve bridge? Who the hell is he to give federal and state contracts to Khairy’s ECM Libra and Kamaludin’s Scomi? If he is in the U.S. he could have been shot to death. Abdullah and his family and friends must be removed if UMNO wants to recover. There is no other way.

In power now are those of Abdullah’s ‘yes-men’. This includes Nazri and Shahrir. Nazri (who the hell is he?) was the one who dared Mahathir to quit UMNO. I feel pity for this man. He does not know that I am Mahathir’s disciple and I will become Malaysia’s eighth PM and I will hunt him down and jail him for being ungrateful to Mahathir. I will jail Abdullah for his absolute betrayal to his people and I will jail Khairy for his idiotic idea of becoming the youngest PM. What about Abdullah’s son, Kamaludin? He will also end up in jail for consuming our wealth thru Petronas and Rapid.

Mahathir must come back to set UMNO right. Then only Najib can take over. Najib has no power against Abdullah. Mahathir must sack all those senators and ministers who are ungrateful to him. We do not need these hooligans as our leaders. To manage multi-racial Malaysia we must have a determine and powerful leader like Mahathir. Abdullah is weak. Though many hate Mahathir but many respect him. Who dares to bring up race and rights issues during Mahathir? Such was the fear that leads to a stable and prosperous nation. Unlike Abdullah, who, can go to hell (or go to sleep?).

If Abdullah (God forbids) continues to stay (he may) BN and UMNO will stumble and crash and will not recover. Gone are all the resources that make them powerful and invincible. Rakyat will vote for the oppositions not because they want to vote for the oppositions but they want to teach Abdullah, UMNO and BN some lessons. And PR definitely prefers Abdullah to stay because this is the only way they can win the 13th GE. They know the rakyat will vote them out of disgust to Abdullah. Malaysia in the hands of PR will suffer. No one thinks they can manage Malaysia. 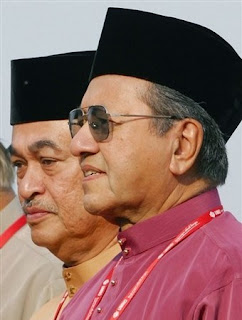