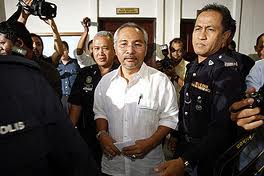 Waaah this tempeh guy sure got class one lah. He already sends back his Datukship to the Sultan! That was my first reaction when I read about his “temporary” surrendering of his title because he was being charged with graft….that is another way of saying he is being charged with being a corrupt Mentri Besar.


Something to do about getting a discount of about 50% for some land he bought. But if it was a willing seller and willing buyer kind of situation how can the session court convict him? I mean we always bargain one lah. Everyone knows that you never ever pay the first price that you are quoted on when you want to buy a second hand car – you must bargain lah! Only the stupid ones pay without bargaining. And I am told that this tempeh guy is not stupid. In this land deal he bargain from RM6.5 million down to RM3.5million…sure clever one lah. I sure respect anybody who can bargain like that…so why is everybody making a fuss about it?

And not only the tempeh guy is being brought to trial but the seller also got caught! Aisehman what is our country coming to? These two guys go and make a diam diam deal and now everyone has to know!

And on top of that he is no longer a Datuk. But this Datuk matter is kosher lah because he was the one who made it a policy to surrender titles if the titleholder is charged in court. But if he was still MB and he has done a corrupt thing, can he still keep the tittle because he is not charged in court? I think boleh – because the operative clause is that you “must be charged in court”. A lot of UMNO guys with Datukship are still datuks though “technically” they should not be….most confusing! I guess it is in line with that “you are innocent until proven guilty” thing! Which means that there are probably a lot of Datuks who are still Datuks but technically they should not be! Ajaib tapi benar!


And some smart aleck asked me if Dentists charged with corruption must also surrender their tittle! I said don't be stupid lah! Even if he is charged and convicted of corruption let him still be a dentist because he can at least take care of the banduan oral health while he is the guest of the government.

Now the other thing is that “temporary” surrendering bit. Does that tempeh guy know something we don’t? Ada kautim ka? Must be lah or else how to be so confident about it all being temporary? Hope it will not be like that Altatntuya case…the UTK killers thought everything kautim already…and then ooopps they are convicted! Serves them right for not letting us see who they are. We still have not seen their face so if they disappear from the face of this earth how to know? But this tempeh guy is quite well known – even though some of us got a bit confused when he did that botox mumbo jumbo. But if you go to jail there is no botox there! I am sure those days of getting day parole like Abdullah Ang is long past…so he will have a problem getting his botox injections…pity his wife who will no longer have a trophy husband…though she will still have the trophies he left behind!

Anyway I got some amusement this morning on reading about this case and thought I should say a few words on it. End of story.
Posted by STEADYAKU47 at Thursday, January 13, 2011