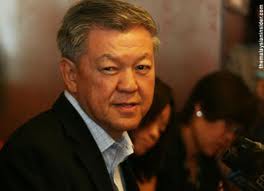 Just when I think that our days of having national leaders who are capable of putting their foot in their mouth while engaging their brains in dialogue
Was over with the delayed departure of "Samy the Velu who bikin the Indian malu” guy….along comes this comedian call Gua Soil Leak aka President of MCA.  The first mistake Soil Leak made was being born!

What took Tan Sri Rahim Thamby Chik many years to accomplish this Soil Leak did in just over two years. While Rahim is still languishing as Chairman of Risda, President of Gabem – Gagasan Badan Ekonomi Melayu, Executive Chairman of ARTAC Holdings Sdn Bhd, Chairman of Yayasan Penggerak Wawasan (YPW) and all round member of the UMNO first tier leaders club….Soil Leak is already President of MCA. Both these men allowed their prick to leave them up the creek without a paddle. With Mahathir, PDRM and the Judiciary riding shotgun with him, Rahim Thamby Chik managed to run the gauntlet of religious and legal prosecution with ease but the political fall out meant many years in the political wilderness which has yet to end.

Not Gua Soil Leak. Soil Leak is a rarity. He was caught with his pants down and his “you know what up” and graphically captured on a digitally enhanced format which has been keenly distributed first in Muar and then nationally – if not globally through the auspices of the world wide web. I would venture to say that if you were to turn to the person on your right and then to your left and ask of them if they have seen “Yours Truly aka Soil Leak” displayed in all his glory ….nine time out of ten, the answer will be in the affirmative. I have it on good authority that the Malaysian Cabinet was also polled on this and the respond was a ten out of ten. On the grounds that he might incriminate himself, the Prime Minister refrained from participating in this exercise! It would not be remiss for me to say that almost all the people in Malaysia would have seen Soil Leak in all his glory, or would know of somebody who have seen Soil Leak in all of his glory or in the worst possible scenario, like Najib, will not want to say that they did or did not, on the grounds that they will discriminate (yes discriminate not incriminate!) themselves as being anti Gua Soil Leak (read ahli ahli MCA here!)

And this Gua Soil Leak is the President of the Malaysian Chinese Association? What does it say of the ahli ahli in MCA? This canny Soil Leak knows the ahli better them they know themselves to know that he would be welcomed back as the conquering hero  - and welcomed him back they did! As their President mah! Then he goes on to appoint his son to “take care” of MCA’s assets! Aiyah man where got road? Again the ahli ahli in MCA said “OKAY LAH!” Now Soil Leak has power and access to funds –and with money and power his position in MCA seems secure – at least for now.

Secure enough for him to volunteer to be the “berani mati” guy for Barisan Nasional at the Tenang by-election. UMNO cannot say anything to belittle Normala’s preference to not shake hands with the opposite sex because to do so would be akin to UMNO having a death wish in Tenang – because after all this is the Islamic way. So send in this Soil Leak guy to do the dirty work for them. And he obliged with this “brave” comment:

"So what is so great about that? That is your religious value which I don't know. How am I to know about the religious values when I'm not practising that religion? I have the right to say that it's basic manners to shake hands with people. That's my values. Understand? You also must value my value, which is good manners, which includes shaking hands."

In politics doing a “brave” things is either doing something stupid or suicidal. Anyway it is done and UMNO can truthfully claim that it was that Soil Leak Chinese guy who did it not UMNO. MCA not UMNO. Anybody but UMNO!

And that is how things are in Tenang today. Gua Soil Leak is confident his position within MCA is strong enough to allow him to go in and bat for UMNO as their “berani mati” guy. He will have his rewards when he asks for it from UMNO–never fear.

But this is what bothers me. Despite their earnest claims our national leaders think nothing of evoking race and religion to win votes. Again and again we see gutter politics at its worst from Barisan Nasional despite Najib’s pledges on 1Malaysia and all that it promised.

Pakatan Rakyat is no better too. They are not beyond bringing out the dirt on the Barisan Nasional’s candidate because they too subscribe to the notion that all is fair in love and politics.

It will be hard for these politicians to change the habit of a lifetime. Harder still to make themselves relevant to the times we now live in and understand our hopes and our aspirations. And so I ask you all to think deeply and with much rationality. The change we want can only come when we put good, decent and responsible individuals in high public office. For now they are as rare as a Bill Gates or a Steve Job and yet we need to find one in Malaysia if we are to begin the dawn that we have hoped for after the 13th General Election. It is almost impossible to find a Dato' Onn Jaafar within the ranks of our politicians now. A Tunku? Perish the thought! Too many Mahathir wannabees and Gua Soil Leak clones that might even overshadow the comic and tragic genius of another “Samy the Velu bikin Indian malu” guy.

And so my friends brace yourself for the coming circus extraordinaire that is the 13th general election. Prepare yourself for clowns and death defying religious and racial interludes with amazing feats of political wizardry that would astonish all of us. After intermission there will be a return of BN’s past rich (very rich!) greats – d Tempe Man, Liong Sik, Thambi Chik, Samad Isa and maybe guest artist appearances of Razak Baginda, Tajuddin Ramli and Amin Shah – all paraded into out midst to do what they best do – trickery, sleight of hands feats involving vast financial instruments in front of our very eyes . For the grand final a return to the “Ketuanan Melayu” deception that UMNO hope will be able to mesmerize all the Malays within the audience into clapping for UMNO again!

May I suggest that you enter the Big Top for this Circus Extraordinaire with your wits around you?  Enjoy and laugh to your hearts content at each and every act performed for your enjoyment. Clap and shout bravo if you think it is deserved but never forget that when all is said and done – it is just an act!

When the lights dimmed and its time for you to leave make sure that you have got your money’s worth. After all it is your money. Your vote.  Once every five years. It must only be given to those truly deserving of your trust. Your future, your children’s future and all our future depend on your vote. You are one. With me we are two.
Posted by STEADYAKU47 at Thursday, January 27, 2011