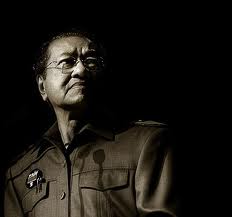 At what stage in his tenure as Prime Minister did Mahathir decided that the end justifies the means? When he did that he threw away accountability and responsibility of his actions to the people. It is one thing for a businessman to take chances in making his business decisions because the consequences of his actions, good or bad, will be for him and him alone to bear – and another when the consequences of your actions affects the nation.

There must have come a time when Mahathir had some self doubts as to the rightness of his decision making process – he was wrong with Musa, with Anwar, with Pak Lah. He was wrong with Eric Cheah, Abdullah Ang, Tajuddin Ramli. He was wrong about Privatization…or if you want to be tedious – the implementation of it was flawed.

But what I would want to pin him to is that he was the one who brought the culture of materialism into the UMNO physce and in so doing, into the Malay consciousness – and by default, into the minds of the people. When you decide that the acquisition of material wealth is the path you want to take in your life, then whatever you do from then on, will reflect the importance of that choice in your life…and that my friend has been the undoing of UMNO and the many other things that is now wrong with our country.

No longer will decency, family values, religion, honour, duty to country and all those values that hold together the fabric of society be considered important. Look at Khir Toyo – what need is there for him to acquire and flaunt such trappings of wealth with his new found wealth (while he was MB) with such haste. Did it ever occur to him that there would be questions asked or has the actions of other leaders that went before him precluded the need to hide his ill gotten gains?

Greed is good? Yes Proton, KLCC, KLIA, the many many Highways that were built, and so many mega projects etc etc all these are Mahathir’s legacies…but the actual costs to the nation is too much for us to bear. When we sit at the kedai kopi we talk about how we could get our hands on some AP’s, how to secure that ‘negotiated’ tender for the mega project, how the brother of a certain political secretary could have got himself two Brabus. The list is endless but always the underlying factor is the acquisition of material wealth…and for that Mahathir we hold you responsible!

The end does not justifies the means – not when it is ultimately the majority of the people who will pay for the excesses of a few. Now who will have the task of making things right?

I sat down with me, myself and I to ponder this. We need to look beyond Mahyudin. Najib is already PM – a fait accompli. Mahuyuddin will want his time as PM too – but beyond that it is still open season. I said that maybe further down the line, a Chinese might become the PM. Myself said that if Obama is President of the US of A then why not a non Bumi as our PM?….but Me said that it was not constitutionally possible for that to happen – but he could not come up with specifics. Then we looked at each other and realized what we were saying. “A Chinese or Indian as PM of Malaysia? Where got Jalan?” Yes we have begun to think the impossible. Yes my friends we need to start thinking about things we have never thought before if we are to enter into the 21st Century. The world is changing around us – we want and need what is best for our country. We need the best in our country to lead us – we deserve nothing less.
Posted by STEADYAKU47 at Thursday, January 20, 2011

Email ThisBlogThis!Share to TwitterShare to FacebookShare to Pinterest
Labels: a sobering thought., Mahathir