NAJIB must not debate DSAI! 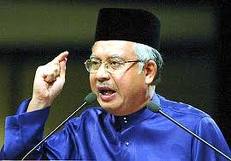 I say, without fear or favour, that our Prime Minister, Datuk Seri Najib Tun Razak, should not accept DSAI challenge to debate him on matters of economic polices or for that matter on any issue whatsoever! This is just a cheap attempt by DSAI and Pakatan Rakyat to get some prime airtime on the television channels that the government controls! Our Prime Minister is entitled to have this prime time slot to himself–why share it with anybody! Datuk Seri Najib you control these medias, you decide on their license, you staff them with your people – so they better listen to what you say or else ask them to go look for another employer!

Why should our Prime Minister put himself remotely into a situation where he will be asked awkward questions that he must answer even when he cannot? Where he has to explain economic policies that he does not understand? Justify policies that he knows he can implement without public scrutiny?

If you debate DSAI how are you to explain the costs overruns of the various mega projects? It is nobody’s business what UMNO politicians makes from tenders, contracts and projects that are directly negotiated. After all these are all on a willing buyer (UMNO Politicians and their cronies) and willing seller (BN/UMNO government). And just because UMNO is on both sides of this equation we know that DSAI will seize on this insignificant reality and start accusing the government and UMNO of colluding on these matters.  Datuk Seri Najib why open a can of worms?
Why should our Prime Minister allow himself to be embarrassed by past economic policies that have almost bankrupted the nation? And anyway the OSA covers most of these policies, including the IPP’s agreement and Highway Tolls – so how can our Prime Minister circumvent the OSA. He must keep these files confidential! And as far as Petronas is concern DSAI understands that it is only the Prime Minister that is privy to how much it earns and how it spends its income. That is the law and DSAI understand that you have to follow the rule of law in the country that you choose as your home!

What if DSAI wants to score cheap political points by asking our Prime Minister what is the progress of the PKFZ investigation? About Altantuya? About so many things that as our Prime Minister he cannot talk about because it is all sub judice or whatever sub lah…no I do not want my Prime Minister to be embarrassed!

So Datuk Seri Najib stay clear of all these opposition attempts to corner you and embarrass you on national television. They got nothing to lose but you have Muhyiddin lurking in the wings to take over as Prime Minister, Mahathir trying to get his son promoted further up the cabinet and so many UMNO warlords asking for mega projects – so you should focus on resolving these more pressing matters rather then debate with DSAI.

Who cares if the Leaders of the USA, UK or Australia debate with the Leaders of the Opposition in the run up to any general election? I know for a fact that it is not done in Russia, in Burma, in Afghanistan, in Iraq during Saddam Hussein’s time or even in Uganda during Idi Amin’s rule – in fact even now they are still not doing it in Uganda! So please Datuk Seri Najib you must maintain your standard. If you need to debate anybody then do so with your BN collegues. They will not ask you any hard questions or ask you to explain anything you cannot explain. And if they ask for you to explain anything it is just to ask you when their “peruntukan” will be distributed and if there has been any increase.

So please Datuk Seri Najib no debate. Do not allow DSAI the opportunity to make you look, act or talk like a bumbling fool. You can do it by yourself without anybody’s help – who needs DSAI!