Deputy Finance Minister Datuk Ahmad Maslan (pic) has no issue with criticism but has insisted that his family be left alone.

"I have no problem if you verbally attack me, but leave my mother alone," said Ahmad on Wednesday.

Ahmad said several comments against him on the social media were very rude, with some of these targeting his mother.

"I have no problem if they want to attack me, but why involve my mother?

"My mother was a rubber tapper and is illiterate. She knows how to read the Quran.

"My mother and my late father worked hard and with Government scholarships, they managed to send their children, including me, to study overseas," Ahmad told a press conference at SMK Pauh Jaya. 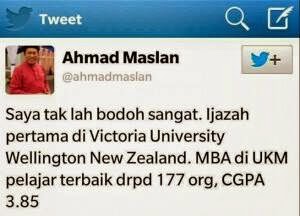 So why can't you work out this simple maxim.

When you hurt someone in my family you also hurt me.

When your government goes after Anwar Ibrahim, Azizah is affected.  Anwar's children and grandchildren are affected and PKR is affected.

The US president might have ordered the invasion of Iraq but it is the Americans soldiers on the ground that bear the brunt of the fighting and they are the one who are killed. In the same manner innocent Americans all over the world becomes targets of terrorists because the terrorists cannot target the President of the United States - so any Americans becomes fair game.

For the thousands that are angry and mad at the BN government for the corruption, the arrogance and the implementing of the GST  - guess who will be their target? You Mat! You are on the front line  - and for many disgruntled Malaysians who have had enough of the shenanigans that your government has been up to these few decades - anyone who has any connections with you, is also fair game.

I am not saying it is right. I am not saying that what they do in harassing your mother is justified...but that is the way the cookies crumbles. Your government have discard every iota of decency and responsibility in the things you do to our people and our country. It is now pay back time!

So grow up and just deal with it!