Tun Mahathir is now fighting our fight for us? 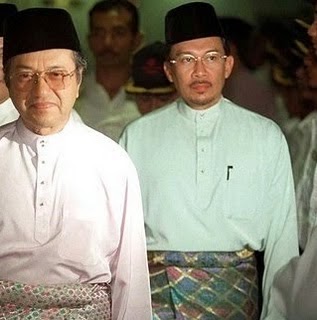 For Mahathir the ends justify the means. As Prime Minister he has time and time again done what he had to do to achieve his ends. You can be rest assured that he will do the same thing today to do what he says Najib must do. Resign. Mahathir is now in the fight of his life - whatever is left of it.

So what is driving the old man to do this at 90 years of age?

For many, with age comes wisdom. For Mahathir wisdom took a detour down many a questionable path and none more torturous that the one he had to take through the years after his retirement. I had often wondered aloud that if only Tun had used his intellect and his legendary super powers for good rather than for evil, we would by now be well on our way to be that developed nation status that he has been talking about for many years.

But never you mind. An olive branch has already been extended towards Tun by none other that that wily old politician - Mr Rocket himself - Lim Kit Siang. And Kit Siang would have done so because he knows that Anwar Ibrahim would want him to do so. How heartening would that be to see Anwar, Kit Siang, Mahathir, Ku Li and hopefully Hadi, on the same dais urging all Malaysians to work with them for change - the DREAM TEAM.

Tun Mahathir is now fighting our fight for us.

You and me will make up the numbers but those in the driving seats would be the creme de la creme of Malaysian politics. Zaid Ibrahim is already making conciliatory noises breathing life into the possibility of this union and we will want him to be up there amongst the Dream Team. Musa Hitam is another. Pak Lah must be persuaded to come on board - if only to tell us that he and Mahathir have made their peace and that Negara dan Rakyat mesti di utamakan.

What matters now is the future. Our future.

We have been through some horrendous times these last decade or so and the last six years of Najib is one we needed to have so that we and others will  know not to allow another Najib to grace Seri Perdana ever again. You must not forget that the Rakyat gave Najib the mandate to do what he is doing now. We are complicit in the abuse of his public office for his personal gain.

That mandate now has to be taken from Najib. This can only be done when there is someone else to take Najib's place. This is Mahathir's immediate tasks - to identify who will be the person  - and more critical, that person has to be endorsed not only by the Dream Team, but more crucially by the people. Given his past choices - Musa, Ghaffar, Anwar, Pak Lah and now Najib all of them left much to be desired - I trust that Tun, in all his newly acquired wisdom, will leave the deciding to others.

I will go to sleep tonight with a smile for I know that no matter what happens tomorrow and in the days to come I am witnessing again the sort of events that happened in 1998 when the first few voices were heard to proclaim -  with much passion and fervent hope for change -  the word : REFORMASI!


Yes Mahathir was the one who gave Reformasi life by what he did to Anwar Ibrahim.

Is it not fitting then that it will be Mahathir again who will bring this sordid era in our nation's history to a close by standing together with Anwar to tell us all that the time for change has finally and truly come?

And I will smile because if Tun and Anwar can stand together with the DREAM TEAM and declare that then I know that in his last conscious moments on this earth, Tun will also smile and say, "I have done my duty".