What can a cross on a building do to make Muslims so fearful of its presence? Can this cross tarik people into the Church and also tarik people to become Christians? Are Muslims retards to allow themselves to be taken in by a cross? 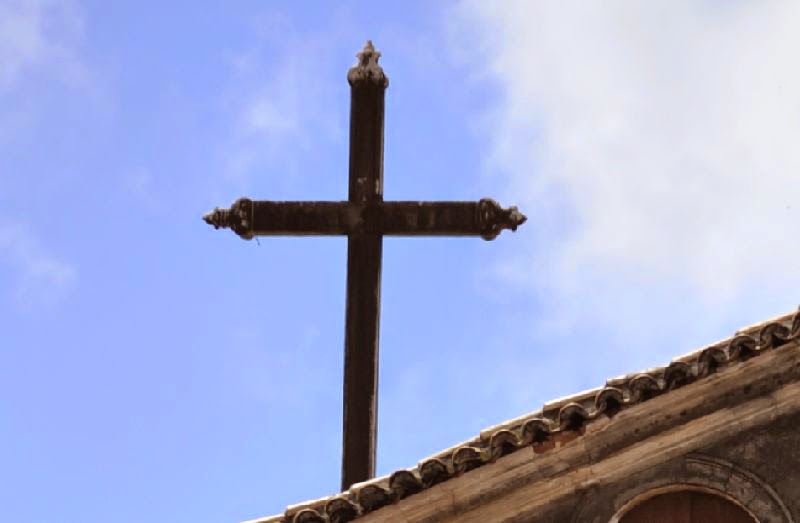 Or is there one rule for Muslims and another for Infidels even if they are living in the same country?

Are these Muslims happy with the way corrupt Muslim leaders are behaving in Parliament? What about all those Muslims girls working in massage parlors, dangdut bars and being mistresses and girlfriends to those Malay Muslims who can afford to keep them - Ministers included! Why don't these two datuks demonstrate against wayward Sultans and corrupt Muslims politicians? Too susah ka? Maybe your datukship will be pull back?

These Muslims say that putting a cross outside a Church is "Tak bagus...Malay areas should not be like that...especially in an area where 95% of the people are Muslims"

It is time Jakim make these sort of Muslims understand that tolerance and an acceptance of the way how other people live their lives and how they worship is a fundamental requirement for anyone wanting to live in a multi - racial society like Malaysia.

But you know what disgust me most?

All it takes is for the government to make it known to these kind of retards that it will not tolerate these kind of behaviour where the dominant Malay Muslim population can impose their will upon how the non-Muslims should live their lives - and if this government does that, it will stop. But they don't because it is politically expedient to keep these religious retards on their payroll to stir up the Muslims against the Infidels!

I live in a Christian dominated society. Sometimes when times are tough I go and line up for a meal at the Soup Kitchen run by Christians. Sometimes when I need some grocery to tide me over until my next pension comes in, I go the Anglicare center nearby to get some supplies - also run by Christians. There are Churches everywhere - at least five within a few minutes away from me. Yes on Sundays there are religious programs on TV  - but I do not have to watch them and there are other channels to watch if I want to watch something else....but I am not a Christian....and nobody has even handed me a leaflet to tell me about the Christian religion...what more to convert me. I can think for myself what I want to do and who or what I want to worship.

And if any of you out there wants to have your say on this matter in support of these religious retards - write your piece and I will post it on this blog - just make sure that what you write is worthy of being read by others.

This came via Adelaide - from a good friend of mine Susan Lee. Tqs Susan for sharing.


Marina Mahathir
Malaysians are better than what they are made out to be. This is the story behind the story about the protest. People like Jannah are the real Muslims in our country.

Guys I wrote this story today and I want to share with you my experience. I don't want to focus on the sheer stupidity of those protesting, but the kindness of a girl named Jannah from Sinar Harian who was also covering this protest. We were the only two reporters there and I was the only non-Malay. Being raised Christian myself, its not hard to see why I was affected by this. So my line of questioning to the villagers was.. sarcastic.
I asked them, what authority do you have to tell someone else to not have a church here? Who gives you the right to claim this land as Muslim land? How will a cross turn your son into a Christian.
These are sensible questions but of course, some people can't be swayed with rational thinking. This angered the group and many became confrontational, grabbing my shirt and speaking to me in a threatening manner.
I have to admit, I was pretty scared. In comes Jannah. I've never met her before. She came up to me and said, hey.. I think you should stay with me. Don't walk off by yourself. We conducted our interviews together after that. Even at times when I wandered off to try and speak with the pastor, I noticed she followed me closely from behind. And she later even walked me to my car. Wow!
I would have probably been beaten up or worse if it wasn't for her.
This story is making rounds on FB and Twitter, because it shows the kind of Malaysia we live in. Intolerant, mindless and sometimes unlivable. But there are gems like Jannah who remind me why Malaysia is a beautiful place. I think thats a story worth telling more than a bunch of people angry at a cross. Wherever you are, Jannah.. thank you!
Like · Comment · Share

Rosen Irwan Just so you know nicholas, her name means heaven
1 hr · Like · 13

Marina Chin:
Thks for speaking out bolding!......they are 'afraid' of a piece of wood haha