The outpouring of disgust and contempt for the Muslim retards who demonstrated in Taman Medan against the Cross has been overwhelming. The coverage has gone global. So now Najib acts? 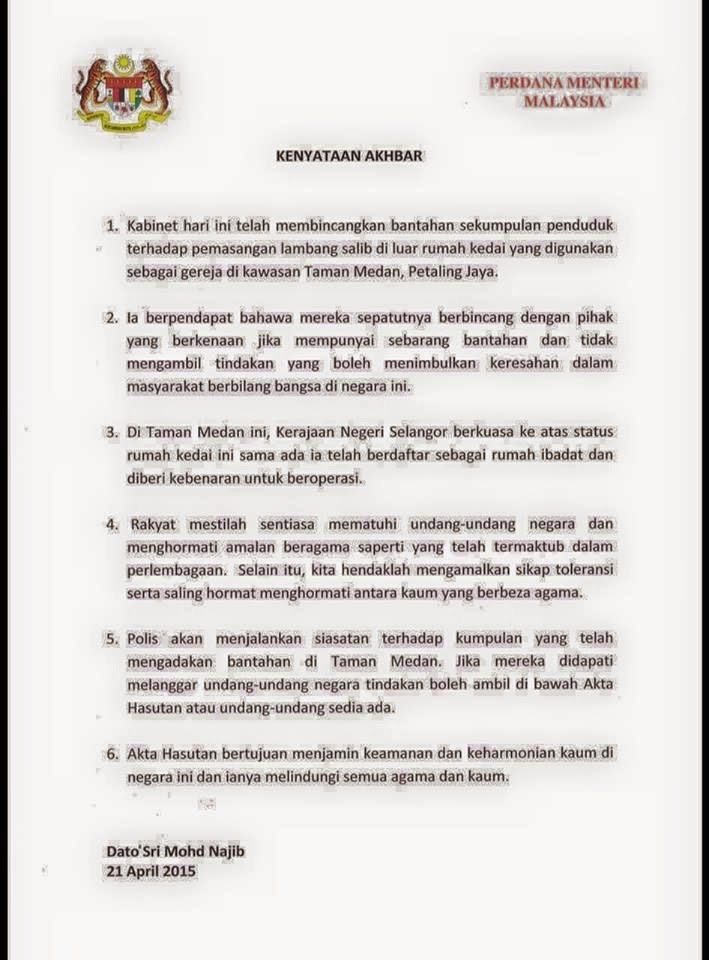 Here is the thing about the above Press Statement - presuming that it is a genuine Press statement that came from the PM's office - Why make a statement now?

What have this government done in all this time about Race and Religion?

Have they not use Race and Religion to advance their political agenda and by so doing have contributed to the fact that there are many Muslims who now openly go about throwing their weight around telling Christians and Infidels that THEY must not do anything that would upset the Malays or Muslims?

Did we not have Umno leaders brandishing a Keris at Umno assemblies and threatening to spill the blood of Chinese in the streets of KL?

Did we not have Umno leaders telling Muslims that the Christians are a threat to Islam in Malaysia?

Do we not have Jakim seizing the bodies of love ones on the pretext that they were Muslims converts and deserve to be buried as Muslims - oblivious to the pain and suffering they cause to the loved ones of the deceased?
Did we not have Muslims disrespecting the Hindus by stepping on Cow Heads 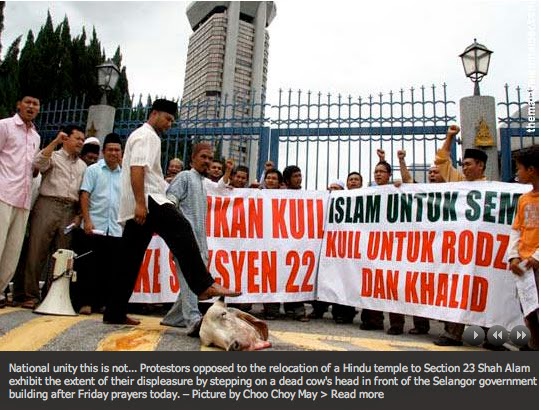 Have not the Syariah Courts been bullying a Muslim on the charge of selling and distributing a book which they say have contravened Islamic Laws?

Have not the authorities been seizing Bibles because they use the word ALLAH  to refer to God?

This BN cabinet have sat through all these incidents and more because it is politically expedient for UMNO to do so and in this way they hope to secure Muslims votes and show themselves to be more Islamic than PAS.

So why this Press Statement over this Muslims retards in Taman Medan who have insisted that the Church there remove a cross from their premises?

I will tell you why!

The outpouring of disgust and contempt for the Muslim retards who demonstrated in Taman Medan against the Cross has been overwhelming. The coverage has gone global. Two datuks were involved. One of them is an UMNO branch head and brother to the head of PDRM who have insisted that he was not the one who organized the demo and yet is pictured amongst the demonstrators and talking on behalf of the demonstrators with the Church authorities. And if that is damaging enough for Umno - this guy is also head of a Security company - why? Because he is the IGP's brother?

And of course there is the statement by that twit of an IGP that his brother was not involved in anything criminal and another statement from the Minister of Home Affairs that it was a seditious act! 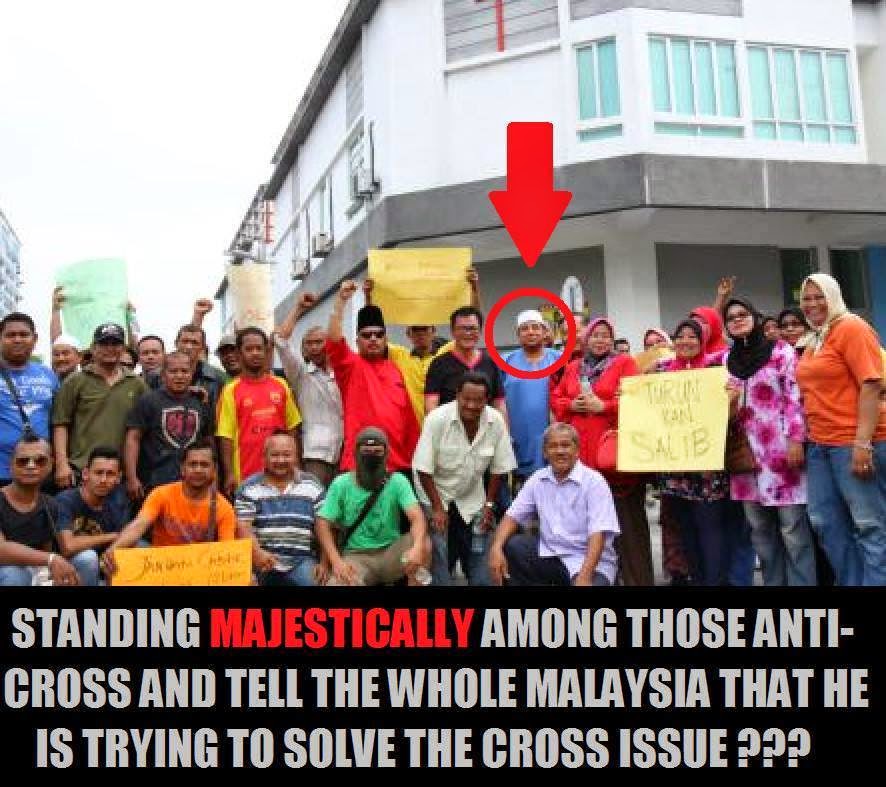 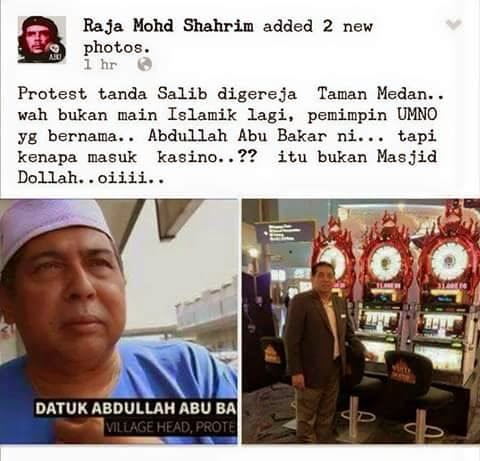 The fall out, backlash...call it anything you like...and everything to do with this incident is going belly up for Umno...so have to do some "damage control" lah.

This incident would not have happened if this Umno led BN government had, right from the very  beginning, not tolerated anybody rubbishing another race or any one's religion. Do that and no one will dare to demonstrate against any race or against any religion. Simple as that. Don't try to close the stable door after the horse has bolted!

Home Minister Datuk Seri Ahmad Zahid Hamidi disagrees with the Inspector-General of Police over actions of protesters demanding a cross at a church be taken down in Taman Medan. – The Malaysian Insider filepic, April 20, 2015.Home Minister Datuk Seri Ahmad Zahid Hamidi today said that the protest against a church in Taman Medan, Petaling Jaya, yesterday was indeed seditious, contradicting the views of the inspector-general of police (IGP) who had earlier cleared the protesters of any crime.
Malaysiakini reported the minister as giving an emphatic agreement when asked if the action of the protesters, who demanded the removal of a cross displayed outside the church, was seditious.
"Of course! Yes, yes, yes!" he was quoted as saying.

"I am very colour-blind. The police (are) very colour blind. Action has to be taken or will be taken against them." Zahid, who is also Umno vice-president, was reported as saying that party members ‎who had joined in the protest would have disciplinary action taken against them.
"Of course, of course, of course... Because they are breaching the law. In Umno, we have to respect other religions. They have to face the consequences," the portal quoted him as saying.
Earlier today, IGP Tan Sri Khalid Abu Bakar said there was no element of sedition in the protest yesterday, as the demonstration was not against Christianity, but the location of the church in a largely Malay-Muslim neighbourhood.
"We do not see it as seditious as it did not touch on Christianity but only on the location of the church," said Khalid today at a press conference at the Bukit Aman police headquarters.
"The cross was taken down following the community's request. There was no violence," Khalid had said, adding that the matter was deemed a community issue, and had been left to the Petaling Jaya City Council and the Selangor government to deal with.
The Star Online also quoted Zahid as saying that "if anyone touches any religion, they are subject to the Sedition Act". He was speaking to the press after a ministry event at the Malaysia Agro Exposition Park Serdang today.
Some 50 people yesterday gathered outside the new church, which is housed in a corner shoplot, to demand that the cross affixed to the building be removed as it was challenging Islam, The Star Online reported.
One of the Umno leaders present at the protest was Datuk Abdullah Abu Bakar, who is Khalid's older brother.
The protesters reportedly said the presence of a cross in a Muslim-majority area posed a challenge to the religion and could sway the faith of the youth.
The cross was taken down by church leaders a few hours after the protest.
Abdullah had said today that the residents had approached him over the matter on Saturday, as they were uncomfortable and sensitive over the matter.
Khalid also addressed his brother's presence at the protest, saying Abdullah had been there to appease the crowd and keep the situation from becoming violent.
The IGP also said that he would not compromise if an offence had really been committed.
"Immaterial if they are my siblings or my children, no problem, we will carry out our job," said Khalid, adding that action would be taken without prejudice. – April 20, 2015
- See more at: http://www.themalaysianinsider.com/malaysia/article/home-minister-at-odds-with-top-cop-on-sedition-for-church-protesters#sthash.zaMBjHKE.dpuf
Posted by STEADYAKU47 at Wednesday, April 22, 2015