The Economist : A thuggish government is playing racial politics. Najib Razak should be dressed down 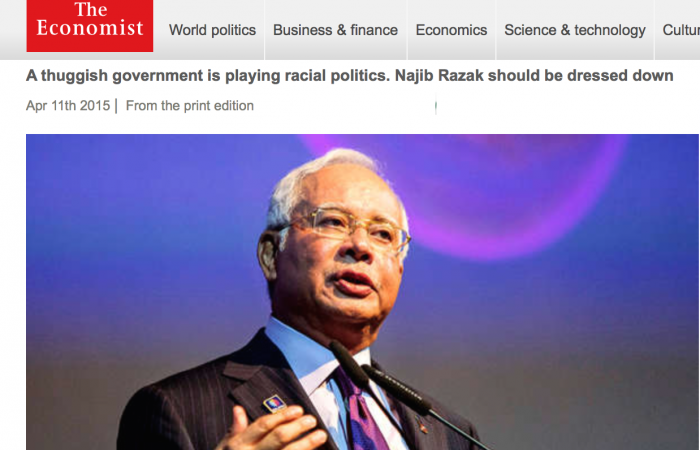 A thuggish government is playing racial politics. Najib Razak should be dressed down

MALAYSIA’S prime minister, Najib Razak, paints his country as a model of moderate Islam—a multicultural democracy and a beacon of tolerance. He has spoken of scrapping oppressive British-era laws and nurturing a creative economy. Meanwhile, his spin-doctors explain that their liberal master is the man to vanquish the reactionary forces in his political party, UMNO, which has never been out of power and which is prone to cronyism and political thuggery. Barack Obama, for one, buys this story. He is the first American president since 1966 to have visited Malaysia. And late last year in Hawaii he enjoyed a round on the golf links with Mr Najib. The two men are said to click. The White House gushes about a “growing and warming relationship” between America and Malaysia.

Race to the bottom

Yet it is time to call Mr Najib out on the widening gulf between spin and substance. On the economic front is a growing scandal over dubious connections and misused funds at a national investment fund, 1MDB, that Mr Najib launched and which is now burdened with $12 billion of debts. Malaysia’s human-rights record is of even greater concern. Three years ago Mr Najib scrapped a notorious colonial law, the Internal Security Act, which allowed indefinite detention without trial. This week he, in effect, reintroduced it. The new Prevention of Terrorism Act allows suspects to be detained indefinitely. Though it is aimed ostensibly at jihadists, lawyers and civic groups are appalled at the law’s sweep (see article).

This fits a pattern. The coalition that Mr Najib leads uses foul as well as fair means to keep the opposition down. In the most recent election, in 2013, it lost the popular vote for the first time. Yet it held on to power thanks to gerrymandered voting districts. Even after that dubious victory, it continued to persecute the charismatic opposition leader, Anwar Ibrahim, who in February was sentenced to five years on trumped-up charges of sodomy. American criticism was perfunctory.

In the past year growing numbers of activists and opposition figures have been arrested under the Sedition Act, another colonial law aimed originally at advocates of independence. Mr Najib, who once promised to remove it from the statute book, now plans to strengthen it with harsher punishments and a clause forbidding speech that denigrates Islam.

Among those already arrested under the Sedition Act are opponents of hudud, corporal and capital punishments, including stoning to death for adultery, laid down in Islamic law. Hudud does not apply in Malaysia, but Islamists from an opposition party want it introduced in Kelantan state in the north-east. The government does not like the idea but is quietly supporting it in a cynical ploy to widen splits in Pakatan Rakyat, the opposition coalition struggling without Mr Anwar.

By encouraging the Islamists, the government is fanning racial and religious divisions in a majority-Malay (and Muslim) country with large ethnic-Chinese and ethnic-Indian minorities. In 1969 bloody race riots nearly tore Malaysia apart. Playing racial politics could be disastrous in this multiracial country. A better and more enlightened way for Mr Najib to boost UMNO’s prospects would be for him to repair its image with ethnic Chinese and Indians.

Malaysia’s friends should be blunter about this where they have been mealy-mouthed. They should condemn Malaysia’s corruption, its decaying freedoms and its racial politics. They should call for both the Sedition Act and unlimited detention to go. Until matters improve, not only should golf be off the agenda; so too should the prime minister’s hoped-for trip to Washington this year.