Rosmah oh Rosmah….. what are we going to do with you? Right from the time that Najib became DPM his profile went up one notch. Your profile went up by about three notches – by your own doing and efforts because as far as you were concern you were already “almost the PM’s wife”.

Already the corridors of power were reverberating with the way you were making your presence felt. Amongst the people that I knew in KL nobody had a good word about you or for you. All the stories were about temper tantrums and having your way in everything that you desire. After Pak Lah’s marriage to Jean – your bitchiness became more pronounced amongst those who had to be around you. Bitchy and being imperial at the same time makes you a person people did not relish being around. Even when najib was DPM, already everyone was being made to choose – to be with you or against you! That really confused a lot of Minister’s wives, the wives of the VVIPs, VIPs and all those wives of people who feel they are important enough to be included within your circle. Pak Lah was fortunate that Jean was a decent lady and gracious enough to understand that the people around her had to make choices even before Pak Lah stepped down as PM. But I remembered that our late Kak Endon did not suffer you easily….she never did suffer fools easily! 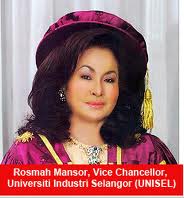 Rosmah you are 57 years old. Do not allow those media people to airbrush your images to make you look like a teenager. I know those bastards sometimes do not listen to you but if they don’t, go talk to hubby lah…after all he is the PM...at least the last time I checked he still was! And don't listen to all those people saying that Najib is now Mrs PM...he is still PM in Malaysia...what you do in your home is your business!

About those luxury shopping sprees overseas…a word of advice. Remember the late Sultan of Johor who titahkan MAS to ship his purchases back to Malaysia?  I suggest you do not do the same thing. People will talk and these “free services” provided by MAS will be hard to explain if it gets out into the public domain…and with the Internet it WILL! Do what we all do….pay for the excess baggage. I am sure you can afford it…or quietly charge on Najib’s expenses account via OGS (On Government Service). But if PR wins the next election…die lah! So better to just pay to get the extra luggage back to KL.

When you are overseas don’t ask the embassy staff for special treatment. Not all the staff are supporters of BN or UMNO. Anything you ask them to do can be posted on a blog and before you can say “Shaariibuugiin Altantuyaa” every one in Malaysia knows about it! Again die lah!

As for your involvement in the murder of Altantuya I suggest that you don’t give too much notice to the statutory declaration that RPK filed. Everyone knows that you will not attend a murder!

·      First of all you cannot dress up to go to a murder – and we know that you are
not going to go anywhere unless you can dress up and look good!

·      Second: Can you bring your bodyguard and your staff with you when you
attend a murder? No you can’t! You cannot have your driver drive you to a
murder – and you are not going to drive yourself!

·      Thirdly: And what if the UTK guys use too much explosives and you get blood
and flesh all over your dress – you will be very upset!

So as far as I am concerned there really is no reason for you to go to that murder! In fact about the only reason you might consider going to a murder is if the person to be murdered had got you so angry that you would be prepared to commit the murder yourself!

We know that Najib has denied knowing Altantuya ….and I am sure you believe your husband!

Oopps  somebody just pointed out that your husband only claimed that he did not know Altantuya AFTER her murder…so I guess we have to strike that reason out. 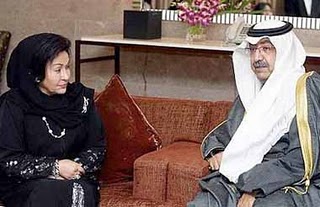 Now how do you explain the above photo? Again you must remember that UMNO’s vote is dependent on the Muslim votes in Malaysia – and Muslims makes up over 60% of the population. Next time wear the tudung…remember the furore caused when you air kissed Shah Rukh Khan? Cannot lah……even air kiss cannot! I am just putting up the photo here so that you will remember not do this again. With the way things are UMNO cannot afford to lose any Malay/Muslim votes in this coming election. 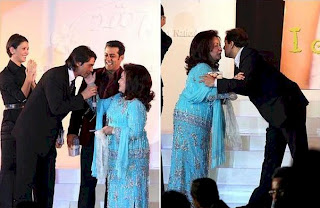 I wanted to write about your children but I guess that will have to wait for now because it is almost lunchtime …and I am hungry.
Posted by STEADYAKU47 at Thursday, January 20, 2011

Email ThisBlogThis!Share to TwitterShare to FacebookShare to Pinterest
Labels: Rosmah