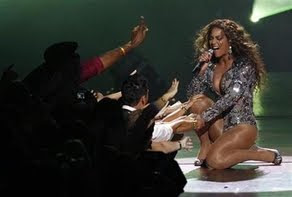 Malaysian entertainment company Marctensia said in a statement on its website that the Beyonce "I am..." concert, planned for October 25 as part of her world tour, would be postponed to a date yet to be announced.

"The postponement is solely (the) decision of the artiste and has nothing to do with other external reasons," the concert organizers said in the statement.

No further reason was given. Marctensia said a new date for the concert would be announced "shortly" and a statement from Beyonce's management would be released later this week.

Earlier this month, Malaysia initially banned Muslims from attending a concert by U.S. hip-hop band The Black Eyed Peas, which was sponsored by Guinness, one of the brands owned by the world's biggest spirits group, Diageo.

The ban was reversed, but a senior official said it was up to each individual's "better judgement" whether to attend the event.

Malaysia's image as a moderate Muslim country was hit when a woman caught drinking beer was sentenced recently to be caned.