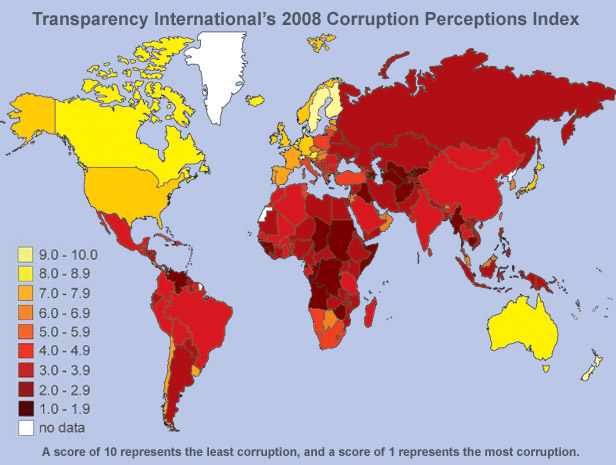 Political corruption affects us all. We elect politicians and political parties expecting them to act in the public interest. By electing them we give them access to public resources and the power to take decisions that impact on our lives. Given this privileged position, immense damage can be inflicted by politicians or parties acting out of greed, or in the service of those who bankroll their ascent to power. It is not surprising that people the world over are demanding absolute probity of their political leaders: citizens in three out of four countries polled by TI and Gallup International in 2003 and in 2004 singled out political parties as the institution they perceived as most corrupt.

Reflecting this worldwide concern, TI has been working on the issue of political corruption for several years, focussing initially on corruption during the electoral cycle. Subsequently TI also worked on mechanisms that can help prevent corruption by politicians who are in power - such as codes of conduct and post-employment restrictions aimed at closing the "revolving door" between business and politics. As with so many other areas of anti-corruption work, most innovation in this sphere comes from the practitioners in the field who make up the TI network. Several effective toolshave been developed, for example to monitor corruption in politics. This has made the problem manifest for policy makers and for the general public, and has provided evidence to underpin recommendations for reform.

At the international level TI has been involved in standard setting, issuing the TI Standards on Political Finance and Favours in 2004.

These standards go beyond other international principles and recommendations by insisting on a role for civil society in designing and monitoring political finance regulations. TI recognises a need for strong political systems and political parties. Reform-minded politicians are important agents of change, as is the media as an important opinion former, since the strongest impetus for change in the political sphere comes from the electorate.

This website provides an introduction to political corruption, analysing why the problem is so widespread and looking at what can and has been done to tackle it. The website is not exhaustive, but rather focuses on the ongoing work and concerns of TI's network of national chapters in the areas of:

Center for Public Integrity, Global Integrity Report: In-depth analysis of the precise extent of openness, accountability and governance in 25 countries that hold elections.

NDI, Money in Politics, A Study of Party Financing Practices in 22 Countries (mainly in Africa, but with a few examples from Europe, Asia and Latin America)

USAID's Money in Politics Handbook: A Guide to Increasing Transparency in Emerging Democracies