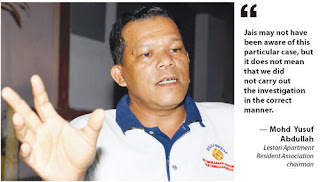 
You all have read this story about another investigation by over zealous stupid idiot into a  ‘khalwat – cross proximity’  situation. This guy happens to be the LESTARI  Apartment Resident’s Association chairman – no I will not mention his name – let us just call him a stupid idiot! He says:

“In fact, the responsibility to curb khalwat should be borne by the community as it affects us all”.

Tell me idiot how does an act between two consenting adults in the privacy of their own bedroom “affects us all?” You went into their house uninvited. You went to the trouble of putting together a raiding party – which included an official from the local mosque – and four male Muslims with “a clear conscience”. How the hell do you know that there have a clear conscience? You Superman? Can see into their head?..and must not be mentally handicapped! To me anybody who is comes into my house to ‘investigate’ what I am doing or not doing with whoever I am with is mentally handicapped. But then again the definition of mentally handicapped might vary  - especially if an idiot is involved.

It would seem that you did display some compassion by not handing over the “khalwatees” (my own word lah!) to the Police because you did not want them to pay the RM$3000 fine. Betul ka? Nak ‘selesai” tak? Idiot when you want to do the right thing by the syariah law – then do it right. If they have to be fined RM3000 then you do not have the power to decide that you took pity upon them and made the decision not to hand them over to the authorities. You are the perfect example of those little Napoleans that we talk about. Lost in your own empty importance. A community leader without substance who gets his thrill going into the privacy of peoples home to watch them do what is their business to do. Not yours. As an NGO commented “An outright invasion of Privacy!”

Why don’t you go check whether that Pahang Sultan did father a Daughter out of wedlock? What about that corruption case in Perak with those katak aduns – there are movies of sex taking place! Is that not adequate evidence? Or maybe that is not as much fun for you because you get your thrill from catching them red handed? Go get your thrill not from the suffering of others. You have a wife don’t you?

And now the Jais director Datuk Mohamed Khusrin Munawi said the RA had no right to conduct the raid as Jais does not give consent to members of the public to conduct raids on others. Now what will the Police do? Nothing I guess.

Mr Chairman, community leader and idiot of the week - life for all of us is hard enough without any one else making it harder for us. Let people who are in the privacy of their home alone. If you want to investigate these ‘khalwat’ cases for your own thrill can I suggest this. Go to Chinatown – go get some DVDs ‘lucah’ for your viewing pleasure  and invite those four clear conscience and NOT mentally handicapped guys along and the mosque official too if you must – enjoy. You do not disturb anybody. You do not harm anybody. Shok sendiri !


It is said that every time you make love/have sex/ fornicate or that one word – first word F  thing – you get the same health goodness of having gone for a brisk walk for eight kilometers. I would respectfully suggest that this community leader in question go walk eight miles…all by himself!


Anonymous has left a new comment on your post "A very stupid idiot !":
Used to stay in Lestari Apt in Damansara Damai which is actually a stone throw away from Prima D'sara. This Mohd Yusuf guy is the JMB (joint Mgmt Body) chairman of the residential area since 2 yrs ago. Don't know how he got selected but one thing which is known fact is that he is an UMNO guy, a PEKEDA gang and a known corrupted & immoral bastard who is there to make easy money under the pretenxt of community leader. Nobody give a fark abt him anyway. Residents hate him but feared his gang of Pekeda boys who hang out every night at a small pondok in the apt area. Those raids of khalwat activites have been on-going since 4 years ago...most of the time is for them to make money and to ugut the victims. Everybody knew it in Lestari.