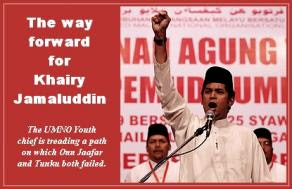 “Semua ok.  Was rather impressed by KJ's maiden speech as Ketua Pemuda.  At least he did away with ketuanan melayu and banished the kris kissing saying that the kris was presented to Hishamuddin as a parting gift. Hahahaha”


Friends I received that e-mail from my cousin in Kuala Pilah this afternoon. I did not hear KJ speak but this I know of KJ. If there is one thing you can say of him it is that he does have the capacity to understand what is happening around him. And if it serves his purpose he will do the necessary. Remember his upright stand that the Internet should not be ‘managed’ by the powers that be? Well that statement by KJ was because he fully understood the futility of doing so and he understood the popular sentiments then prevailing – that the people will not tolerate it.

Ditto for Ketuanan Melayu. KJ understands that this Ketuanan Melayu concept has been dead at the starting post a long time ago. So he takes the ‘courageous’ stand to give notice to all that he is not for ‘Ketuanan Melayu’. Good for him – now let us se what he does next about walking the talk. No more negotiated tenders? No more jobs for the boys syndrome? We wait and see.

P.S. That “giving the keris to Din as a parting gift” comment was good. Do not let it be said that KJ is without a sense of humor. I just wish he would use his powers for good rather then evil….