What a waste of life! 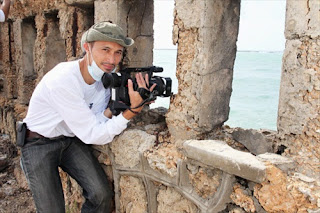 Meanwhile, in response to the Malaysian Press Institute’s proposal for a special course to prepare journalists for assignments in war zones, Bernama quoted Dr Latiff as saying that the ministry welcomed any form of cooperation with MPI.
“We cannot fight fate. If it’s meant to be, it will be, but the least we can do is go (to the war zones) with proper equipment and preparation.” The proposal came about following the death of BernamaTV cameraman Noramfaizul Mohd Nor, 39, while on a humanitarian mission with Putera 1Malaysia Club to Mogadishu, Somalia.
Deputy Defence Minister Datuk Dr Abdul Latiff Ahmad.

What kind of bull shit is this Deputy Defence Minister trying to put over us? So now the death of Bernama TV Cameraman Noramfaizul Mohd Nor is FATE?

“Shots were fired at the government truck that was accompanying their vehicle, Noramfaizul who was sitting by the door was hit by a stray bullet which pierced his lungs. Another cameraman, Aji Siregar Mazlan, also suffered injuries”.

No Mr Deputy Defence Minister I do not agree with you. The ambush itself is fate – nothing could have prevented it from happening. But what happened before and after the ambush is not fate – it is preparation.

Was this unfortunate cameraman ever provided with survival training and safety guidelines when operating in war ravaged Somalia? If he had been then those safety instructions would have saved his life!

Putera 1Malaysia Club should have understood that terrorists consider cameraman “soft targets” to be used as political pawns for their own advantage – far easier to take a cameraman as hostage or to kill than to go after armed soldiers, diplomats or CEO’surrounded by armed bodyguards in armoured vehicles.

Reuters have a policy that states that no journalists or cameraman can go to a conflict zone without state-of-the –art training such as offered by British military specialists!

When this cameraman made that commitment to do front-line coverage for Putera 1 Malaysia’s club it is their responsibility to reduce the risk to Noramfaizul by ensuring safety issues were taken care of. It is a disgrace, if not criminal for them to send Noramfaizul into harm’s way without proper training, protective gear or clear guidelines as to how far he could go into danger zones in pursuit of a photograph to be used for political propaganda!

The Club President Azeez should be ashamed of himself! It is his  obligation to provide the best available training, equipment, insurance and counseling and to protect the exposed cameraman from all the dangers in a war ravaged zone before Noramfaizul even got onto the plane to Somalia.

At a minimum bulletproof vests and armoured vehicles  should have been provided – money and time should not have been a factor to not do so! No video is worth getting killed for ! Not even if it was to advance the political ambitions of this Azeez guy
Posted by STEADYAKU47 at Monday, September 12, 2011