He was like a cock who thought the sun had risen to see him crow! 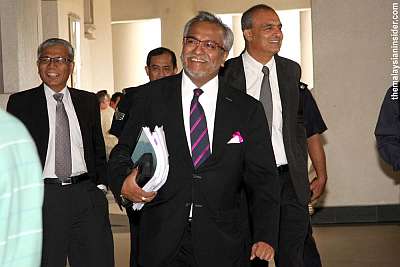 Shafee (centre) smiles as he exits the coroner’s court after the ruling on Ahmad Sarbaini’s death, in Kuala Lumpur September 26, 2011. — Picture by Choo Choy May

KUALA LUMPUR, Sept 26 — The Malaysian Anti-Corruption Commission (MACC) has been “100 per cent” cleared of blame by the coroner’s court when it ruled that a Customs officer’s death in the graftbuster’s Kuala Lumpur office was by misadventure, the commission’s lawyer said today.

Prominent lawyer Datuk Seri Muhammad Shafee Abdullah, who was hired to act for the national anti-graft body, beamed as he told reporters his client has been fully absolved by the verdict on the death of Ahmad Sarbaini Mohamed.
However, the prominent lawyer said he agreed with coroner Aizatul Akmal Maharani’s observation that an MACC officer named “Kamal” had been negligent in his duty for leaving the former Customs assistant director alone at its Jalan Cochrane headquarters.
“He should not have left a person for even one second,” Muhammad Shafee said, after the verdict announcement, adding that he would advise MACC to act on the coroner’s remark.
“For sure there’ll be a follow-up on Kamal,” the lawyer told reporters.

A polite term used to describe a penis that is long, floppy, and blood-filled, but dose not stand out and proud like a normal erection.

Remember Teoh Beng Hock? That thirty three year old Chinese guy that was found sprawled on the rooftop of a building adjacent to the MACC office? Teoh Beng Hock’s death was suicide – so say the Commission of Inquiry!Huh! 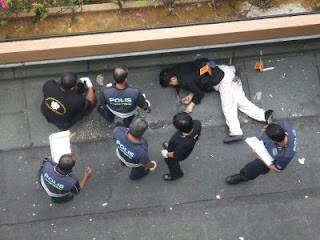 Now the coroner’s court tells us that this Malay Custom Officers death was a misadventure. Do you think we expect anything less? And you tell us that the MACC has been “100 per cent” cleared of blame….yes cleared of blame but not of negligence!

Let me tell you what the public thinks. Teoh Beng Hock’s  death in custody is murder. Another death in custody is “if it works once, why not do it again!”. And it fills me with contempt and utter loathing to see you walk smilingly and  arrogantly out of that court thinking that you have been victorious in absolving MACC of any blame in the death of Ahmad Sarbaini Mohamed.

You are the very personification of the arrogance that UMNO exhibits. Did it not cross your mind that it would have been polite and the decent thing to do to walk out quietly and solemnly to show respect to Ahmad Sarbaini family? I guess that never crossed your putrid mind. How could it cross your mind when what was foremost in your mind must have been what you could now extract from UMNO for your “success” against the late Ahmad Sarbaini Mohamed and his family.

It would do you some good Shafee if you understand that humility and good grace does you no harm. If anything it would allow us to give you just that bit of leeway as someone who was just doing his job! My contempt for you as a human being is not helped when I see you gloating over the tragedy of a family that has just lost a loved one in the manner they did. May ALLAH give you the grace to be humble in victory….if defending a failed and negligent MACC can be called a victory! 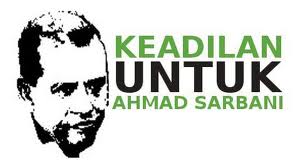