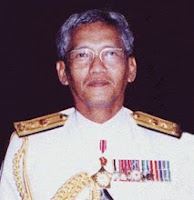 NST Monday, September 26, 2011 reported that the three MACC officers involved in the extortion-cum-robbery at KLIA on September 15 has been transferred to a ‘desk job’ and that the MACC is conducting an internal investigation into the case.

I just simply cannot understand what a ‘desk job’ means, and why should the MACC be allowed to conduct an internal investigation when the case is clearly criminal in nature. Isn’t this not going to be a police case or are the police waiting for the MACC to file a report first before they (police) take on the case? Or is it because the MACC officers are government salaried; hence they have the luxury of time and the case is at the pleasure of the MACC.

What if it was done by someone else or that it was done by me? I am quite sure I will be placed in a police cell without haste and denied off my worldly benefits; with the exception of the air around me. I know too that I will be abused to solicit a confession and the case speedily presented to the court, tried and incarcerated in Sg. Buloh prison. That is the privilege one gets being a no body.

Base on what I know being a retired government servant, a case like this that is criminal in nature should have been handed over to the police with an accompanying police report. I think the MACC are experts at making a police report, but in this particular case involving their own officers, they are somewhat hesitant in filing a police report. Why do they need to do an internal investigation is mind boggling. This should rightfully be a police responsibility and not theirs. You and I know that an internal investigation is usually flawed and lopsided, and any incriminating evidence that goes against the department is usually shielded off. I have heard this done too often.

Now, taking the three ‘thieves’ off their appointment and placing them to a ‘desk job’ is also something I cannot understand. If I was the MACC Director, I would have suspended the three ‘thieves’ and imposed a loss of earnings and benefits until such time the case is resolved by the court. I do not know what are the regulations and procedures to be taken on government officers involved in criminal activities, but certainly I don’t believe the action taken by MACC is correct.

I am told that the stolen cash of about RM1 million is still not found, and the remaining two honourable ‘thieves’ are still missing. Or are they now enjoying their loot in Casablanca, Paris or Les Vegas?

MACC certainly has a long way to go to redeem their lost pride and public confidence. I most certainly have lost confidence in the MACC, and don’t blame me and the rest. And just ask the Singapore money changer if they can trust the MACC.


CRUSADE AGAINST CORRUPTION
Posted by STEADYAKU47 at Monday, September 26, 2011

Email ThisBlogThis!Share to TwitterShare to FacebookShare to Pinterest
Labels: MACC