with thanks to : mind NO EVIL 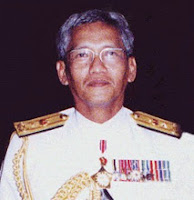 Quote “Please humble yourselves. There is no guarantee we can rule forever. We are facing a whole new political landscape today and are assessed and judged by the people each day” Unquote.

The above was a quotation from PM Najib during Sunday’s Negeri Sembilan BN Convention.

At long last, PM Najib is beginning to say something sensible about the current state of the ruling party, and his concern that the up-coming GE would be a difficult one. I am rather surprise with this sudden change in PM Najib’s assessment on the fate of BN and likely outcome of the next GE. This is in deep contrast with what was thought off by his Deputy Muhyiddin Yasin when he said the nation would go bankrupt if the opposition were to rule. I remembered too that Senator Idris Jala by his estimation did say that the country would go bankrupt by 2019, and all hell broke loose soon after. It wasn’t the opposition that said that; it was a ‘solicited member’ of the ruling government.

PM Najib no longer talks about ‘crushing dead bodies’ to defend Putrajaya or to do what is necessary to win back the ‘jewel of the nation’ i.e. Selangor. Indeed, PM Najib had humbled himself by saying what is in his heart, and not to say anything that he hears from his ‘pak pencacai’ that clings to him like leeches.

You see, one can easily identify a ‘pak pencacai’ merely by looking at the way they dress, talk and move around. You so often see them loitering around KLIA awaiting the return of the PM or DPM from an overseas visit. They would rush in at the sight of the PM or DPM and quickly kiss their hands. I have seen lots of them while I was in service and let me tell you this, that I have never in my life kiss anyone’s hand except that of my parents, my closest uncles and aunties; not even the hands of Royalties. As a soldier, I accord them (Royalties) the smartest salute and that has been the training.

Honestly, I am pleased that PM Najib has now acknowledged that there are some of his people that always say rosy things concerning the state of the party, which in actual fact is the contrary. If indeed PM Najib has identified them, my brotherly advice is to ignore them, and be forthright by saying to them that their advice is no longer needed. My advice may sound hard, but as a leader one cannot be taken for a ride all the time when untruth is being advised to him.

Now to get at what was said by DPM Muhyiddin that the country would go bankrupt if ruled by the opposition, just let me asked this – are any of the states ruled by the opposition bankrupt? On the contrary the four opposition held states have done reasonably well; much better than before. Kelantan despite being ‘victimized’ is still very much alive; notably free of the scourge of corruption. Selangor and Penang have performed outstandingly with surplus state revenue. Please do not deny this Muhyiddin, and I guess this is the very reason why the ruling government is so determine to get back Selangor and Penang, where only a miracle can change the ruling status of the two states.

I do not know much about Kedah that has always been a poor state even during the previous rule. But from what I read, the PAS government has alleged that problems saddled by the state today are merely the ‘left-overs’ from the previous government. I read too that the state opposition members are beginning to question the PAS government of its failures, oblivious to the fact that the problems were of their doing when they (BN/UMNO) had been ruling the state for 54 years.

Much that I would like to predict the outcome of the up-coming GE now; I thought I would rather wait to see how each state performs and the conduct of its leaders. I do not believe that the election would be held anytime before the close of this year; certainly not before the effects of the 2012 Budget is felt by the rakyat.


CRUSADE AGAINST CORRUPTION
Posted by STEADYAKU47 at Monday, October 17, 2011