Authority of the Sultans....what authority?


KUALA LUMPUR, Oct 21 — The federal Islamic development agency claimed today that many Muslim do not respect the authority of the Malay Rulers who are heads of religions for their respective states.
On the eve of a planned gathering of a million Muslims to defend the faith, the Department of Islamic Development Malaysia (Jakim) prepared a Friday sermon that accused some parties of putting political interests ahead of the religion.
“Many Muslims today do not respect the views and authority and in fact question the Sultan heads of the Islamic religious councils.

“Respect” a feeling of admiration that you have for someone because of their personal qualities, their achievements, or their status".

I suggest Jakim read the following article on The King of Thailand and maybe, just maybe, they will understand why so many Malaysian are fed up of the bad behaviour and antics of almost all of our Sultans. And I say almost all of them because there are one or two goods one amongst them...but for the most part these Sultans waste their time by wasting the money they get from us and living a life of decadence and fornicate at our expanse.

The recent involvement of this Sultan of Selangor in ruling that the Selangor religious authority raid on the Damansara Utama Methodist Church on August 3 was legitimate is a case in point. 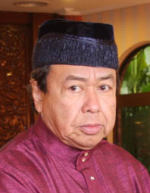 Now this guy, in as far as I can recall, have been married twice. Right now I guess you could call him a dirty old man...because at age 65 or thereabouts, he is screwing around with females to whom he is not legally married. Now what is Jakim going to do about that? And you expect the people to show respect to this Sultan?

I can go on about other Sultans...but enough for now. I suggest Jakim and other Sultans out there do go and read the following article on the King of Thailand and then santap for a while and when you wake up...start asking yourself why people are against spending so much money to upkeep an institution that not only does not give any value for money spent but consider itself "ROYAL". They are as ROYAL  as I am a Bugis! It does not make a difference to the world that we are now living in...even Mahathir no longer think about Kerala!

The world is changing! We no longer tolerate anybody that thinks that the nations owes them a living just because they were born in an Istana! Heck we even question the right of the sons of our Prime Minister to be anybody in government!
So all you Sultans...go read this!