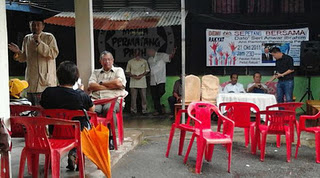 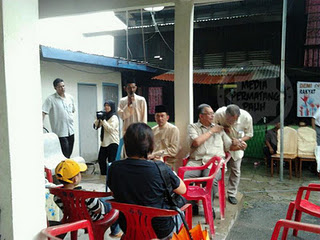 One Million Supporters Did Not Show Up

Here are two pictures which I lifted from Parpukari's Blog. A picture is indeed worth a thousand words. Obviously it was Brother Anwar Bin Ibrahim in Permatang Pauh, talking to his supporters. You can read the banner "Sepetang Bersama bla bla bla". The time and date is on the banner 2:30 PM on 21 October 2011 ie yesterday.
.
The empty chairs far outnumber these empty people. While the brother is talking, the guy in the chair beside him is trying to look like the pillar. The guys in the background are lost in their own conversations. No one seems interested in what the Brother has to say. The organiser could not even arrange the chairs in a straight line. And who is sitting right up front - in the first row? A little kid wearing a yellow baseball cap. So now the brader is preaching his venom to little kids. Lets get them when they are young. No 'orang ternama', no VIPs, almost no one at all.
.
This is becoming increasingly the case. People have lost interest in the brader. People have lost interest in PAS too. DAP is now supreme. They will hold the fort. Akhir sekali China juga yang jadi taukeh. 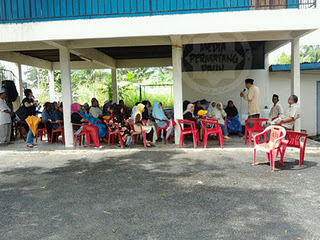 
I saw this first on OutSyed the Box blog....but only the top two pictures were on the blog which seems to confirm what was said in that blog....."that the empty chairs outnumber the empty people" gathering in Permatang Pauh to meet with DSAI.


Until I went to Parpukari Blog and saw the third picture just above which gave us a better idea of what was really going on. There were more people than empty chairs at that gathering!


I guess that is what you call "spin" ....I am learning as I go along to not take things at face value in blogger land! You too must do that!
Posted by STEADYAKU47 at Saturday, October 22, 2011